The Bogey of Overpopulation

The Socialist Party are optimists for the future of the planet. Unlike the Malthusian-influenced eco-dystopians predicting the extinction of humanity, we actually hold that society is capable of feeding and sheltering our growing global population and can keep all healthy and contented. Very obviously, we add one huge caveat which is that we require a world socialist system to achieve that goal. Otherwise, those catastrophists may turn out to be correct that our present civilisation could collapse with dire consequences such as climate-change refugees storming the gates of Fortress Europe, reminiscent of the Barbarian hordes of the past.

It takes socialists to explain that the deprivation and squalor that most working people experience is caused by the operations of the capitalist market system, not by population size and its carbon footprints. Regardless of the progress of technology and its ability to produce an abundance of social wealth using fewer resources, great numbers of people will always endure deprivation. Socialists suggest that the so-called overpopulation problem has been popularised to disguise the intrinsic failure of the capitalist exchange economy to provide a decent level of security and comfort to most of the world. Other than certain specific situations complicated by military conflict there has always been enough food to feed everyone, but billions have faced hunger because they didn’t possess the money to buy it.

It is worth recalling the actual experience of David Crawford, who was a member of Oxfam’s humanitarian support team and the senior humanitarian adviser in Africa’s Sahel region. Back in 2007 when interviewed by the BBC (tinyurl.com/3h6kaysu) he explained that the media widely perceived that food shortages were the cause of widespread hunger. Although this played a role at a local level, it wasn’t the main cause as he learned from experience in Niger which was still exporting food, and staple cereals were available in the markets. The problem, Crawford pointed out, was that the poorest couldn’t afford to buy it in the markets. Once people ran out of money they fell into debt and sold off their valuable livestock. For the poor, the main problem is access to food, not the availability of food.

But let’s not take Crawford’s word.

Robert Watson, a former chair of the Intergovernmental Panel on Climate Change explained ‘hunger is not a food production problem. It is an income problem.’

Robert Fox, formerly of Oxfam Canada: ‘there is no food shortage in the world. Food is simply priced out of the reach of the world’s poorest people.’

Ngozi Okonjo-Iweala, when World Bank Managing Director – ‘there is not a global food shortage — there is a price crisis’.

American Association for the Advancement of Science: ‘the problem is that many people are too poor to buy readily available food… Even though “hungry countries” have enough food for all their people right now, many are net exporters of food and other agricultural products.’ 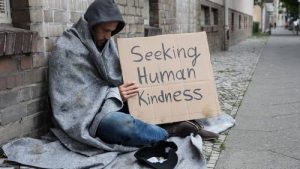 The truth is out there about the effects of capitalism, but regardless of the facts on the ground, there are those involved who still do not recognise socialism as a viable solution and continue with their palliatives, over and over again, without ever learning the lessons of experience. If food shortages exist it is due to this economic system where production is primarily for private profit and despite desperate demand, the capitalists are unwilling to satisfy such demand unless the return is sufficiently rewarding. The ability to produce and distribute is not the issue. The Socialist Party’s case is that the necessary changes cannot and will not be permitted by capitalism.

We can only for now speculate, but even under the constraints of the profit system since 1948, according to the U.N. Food and Agriculture Organization and the U.S. Department of Agriculture, annual world food production has outpaced the increase in population.

The former director of the Agricultural Economic Institute at Oxford University, Colin Clark, has estimated that if the world’s farmers were to use the best methods of farming available, an American diet could be provided for 35.1 billion people.

While accepting the truism that we live on a finite planet and infinite growth is impossible, socialists propose a steady-state, zero-growth model of the economy for the future society and envisage an anti-consumerism trend to prevail with an expected drop in consumption levels following an initial phase of higher production to raise the impoverished to a decent standard of living. We say this sustainable future can come about because in a society of social equals there will be no need for conspicuous consumption and public ostentation to display superiority and social status. The conditions are now ripe for socialism, ie, production for use where all humanity cooperates in the common social interest. In a sane world fit for human beings the economic forces fostering malnutrition and under-nourishment disappear.