Tory MPs were spitting feathers last month after four Black Lives Matters activists were acquitted of criminal damage by a jury at Bristol Crown Court after pulling down the statue of a 17th century slave trader and chucking it in the harbour during the BLM protests in 2020. 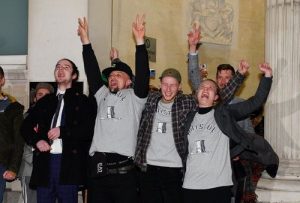 The verdict will have come as a surprise to some who expected an open and shut case, as the defendants were filmed on CCTV and so were scarcely in a position to deny the deed. Their somewhat tenuous defence was that the presence of the statue was in itself a ‘hate crime’ and that therefore its removal was in line with current legislation. Even more dubiously, they argued that as the statue was public property, and they were members of the public, they had a right to dispose of their own property as they saw fit. It’s hard to imagine any jury being persuaded by either of these arguments, but they were probably more exercised by the prospect of appearing to endorse slavery if they went the other way, so delivered an acquittal verdict anyway.

Unsurprisingly the prosecution case was that it didn’t matter who Colston was, that the law was clear: people couldn’t run around wrecking monuments they didn’t like. This was also the line taken by government ministers and Tory backbenchers, who are always the first to leap nobly to the defence of a set of laws which protect their wealth and privilege.

Transport minister Grant Shapps spoke for many of them, saying ‘we live in a democratic country. If you want to see things changed you can get them changed, you do that through the ballot box, or petitioning your local council, etc. You don’t do it by going out and causing criminal damage’.

The problem with this is that there had already been legal campaigns, for no less than 100 years, to remove this statue, but from 1920 onwards these had resulted in no action because no government had ever bothered to establish a framework for the democratic removal of a public monument, on whatever grounds.

Tory yahoos immediately fulminated that ‘the result of this ruling will be that mobs will seek to tear down statues across the country – it gives a green light for mobs’, and that ‘as a country we need to protect our heritage from mob rule’. Note how quickly ‘the people’ becomes ‘the mob’ in government parlance when they do anything the establishment doesn’t like. It’s democracy when it pleases our masters, it’s ochlocracy when it doesn’t.

Respect for venerable monuments did not stop Shapps from muttering darkly about changing the rules of jury trials to prevent juries delivering verdicts that upset the government. Possibly sensing that red-eyed zombie rage was taking over the Tory camp, arch-Tory Jacob Rees Mogg felt obliged to state that, when it came to great monuments, the British jury system was up there with the best of them, and loose talk about pulling it down just because of one trivial verdict was not hugely constructive. Boris Johnson meanwhile, showing as ever his forensic grasp of historical matters, opined that it was wrong for people ‘to go round seeking retrospectively to change our history’.

This echoes the recent furore engulfing the National Trust, whose current policy of daring to mention slavery in connection with the history of landed estates and country piles has provoked allegations of ‘wokeism’ and even death threats against its senior figures. But it seems clear to anyone who has ever visited these estates that slavery has been largely airbrushed out of the pretty picture to spare the blushes of the current owners. All that NT bosses have tried to do is restore the real truth about where the money came from that paid for these country piles in the first place. The argument that this is somehow ‘historical revisionism’ is as transparent as it is hypocritical. Many of Britain’s rich got to be rich through slavery, and consequently many of the monuments, palaces and public buildings of Britain’s cities, and of the former slave ports of Bristol and Liverpool, deserve to be understood in this context. This being so, it’s not unreasonable to suggest that statues of slave owners are a continuing and blatant affront to human decency which should have been removed decades ago. If the state wasn’t going to do it, then individuals would have to instead, and as it turned out, the Bristol jury had no problem with that.

The even bigger picture

But this is not what’s really bothering the frothing Tory MPs. They couldn’t care less about history, gesture politics, or statues. What worries them is that a jury can take such a cavalier attitude to the destruction of property, because property is what makes the rich rich. If the mobile vulgus can take down a statue today, what’s to stop them taking down Buckingham Palace tomorrow? Or taking over the lands of the Duke of Westminster, or any private mansion? Property is a concept that underpins capitalism, and it has acquired a fetishised totemic power in the minds of workers. It demands to be respected, worshiped even, as a sacrosanct and inviolable thing. But like all fetishes, its power is only apparent, not real. Once people stop believing in it, it ceases to exist. It is like a vast bubble of magical nothingness which holds society in its thrall. And, shock horror, the Bristol jury went and stuck a pin in it.

Not that capitalism will implode just because of that. But the rich are terrified of workers losing their awe of private property. Once they do that, they might start asking themselves why there are rich people at all, and why they, the workers, are obliged to be poor and waste their lives as wage slaves in order for those rich people to enjoy luxury and idleness. As socialists often say, the rich are much more class-conscious than workers, at least for now. They know that they owe their wealth to the despoliation of the planet and the utter subjection and exploitation of the overwhelming majority of the population. They also realise that workers, organised collectively, have a real and irresistible power that could sweep them away utterly, while their own power as a tiny minority resides in nothing but fetishised symbols, rituals and customs. In short, they know how weak they really are.

Society now accepts that slavery is an indefensible crime against humanity. The Bristol verdict suggests that workers now take a dim view of public monuments glorifying it, regardless of who the monuments belong to or what laws are in place to preserve them. But many of the arguments against slavery also apply to the practice of wage slavery, which is part of the machinery of capitalism and which condemns billions to relentless misery. We look forward to the moment when workers stop respecting its monuments and institutions too, and start pulling down more than a few statues.

One Reply to “Colston verdict – the big picture”