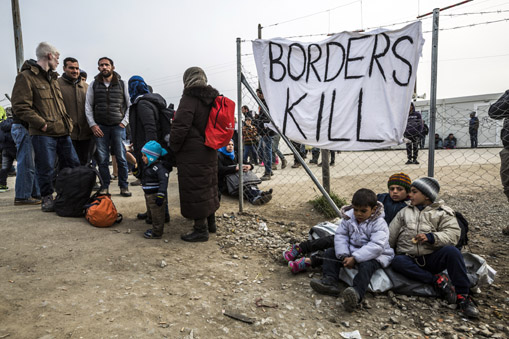 To be a worker in capitalist society is to be deprived of any form of ownership of the means of living and therefore of having any real control of your own life. Being forced to sell your labour-power to an employer can lead to a precarious existence where you may end up becoming unemployed or even homeless. If you are unlucky enough to live in a war zone, you may be forced to flee your home and attempt to seek a new life elsewhere. You would then fall prey to ruthless smuggling gangs and come up against the brutality of state forces ranged against you. Sadly, this was the fate of 27 refugees who drowned while trying to make the treacherous crossing over the Channel on 24 November. This tragedy was not unforeseen, in fact it was one waiting to happen given the heavy traffic in the Channel. These were not the first deaths arising from these crossings nor will they be the last. Like the unemployed and the homeless, refugees and migrants are vilified as scroungers and ne’er-do-wells.

The response of the political leaders to the refugee crisis in Calais reveals the paucity of thinking that characterises modern capitalist politics. The rational course of action would have been for the UK and French governments to co-operate to find a solution to this problem. However, Boris Johnson’s government came to power on the basis of ‘Get Brexit Done’ and ‘to take back control of the UK’s borders’. To keep his more xenophobic supporters on board a little bit of Euro bashing did not go amiss. Emmanuel Macron, with his eye on next April’s presidential election and the need to play the patriotic card to see off his rivals on the far right, Eric Zemmour and Marine Le Pen, was more than eager to pick up the gauntlet. Boris Johnson sent Macron an open letter outlining proposals he knew that he would not accept, such as joint patrols by both British and French forces on the French coast. Macron’s response was to withdraw an invitation for the British Home Secretary to attend a meeting to discuss the movement between people in the sea between France and the UK. The refugees in Calais had become pawns in this game of tit for tat.

The UK government has used demeaning terms such as ‘economic migrants’ to refer to refugees and when they do arrive on British shores they are classified as illegal immigrants. Priti Patel, the Home Secretary, had the not too bright idea of the British Border patrol to push back the refugee boats to France. Any ramming by ships of these overloaded dinghies would likely cause them to capsize and their occupants drown. It is unlikely that many skippers would want to stand trial for murder or manslaughter. The forthcoming Nationalities and Borders bill will further tighten restrictions. One clause seeks to deport refugees if it is found that they passed through a ‘safe’ country.

Boris Johnson’s government shed crocodile tears over the drownings and offered their condolences to the victims’ families. Both the French and UK governments diverted attention from their own culpability by blaming the people smugglers, which ignored the fact that closing off the legal routes for refugees to come to the UK had gifted opportunities to the smugglers to make profits out of people’s miseries.

This tragedy has not ended the demonisation of refugees. In this op-ed piece for RT dated 25 November: ‘The four star hotels, the free healthcare and the generous benefits system have, according to French Interior Minister Gerald Darmanin, made the UK an ‘El Dorado’ for would-be migrants. I hate to say it, but I agree with him’ (‘I predicted a migrant tragedy months ago. Why didn’t the UK and France prevent it?’, former UKIP leader Paul Nuttall).

Kevin Hurley, a retired British police officer, in another op-ed piece about the situation in Calais, seems to suggest that the local people find many of the refugees menacing: ‘Yes, I saw some tragic Kurdish families, but they were few and far between compared to the hordes of young men loitering about or just staring. I found it frightening (‘As an ex-cop, I know how hard it is to stop the flow of illegal migrants into Britain’, RT, 30 November).

If you read the press and listen to the politicians all you will learn is that the refugees want to come here to help themselves to our goodies and what measures can we take to stop them. What you do not hear so much of is what drives them to risk their lives to come to the West.

It is no surprise to find that most of the refugees come from these countries – Afghanistan, Iraq, Iran and Syria. Three of them have been embroiled in wars of various kinds. Two of them were occupied by the US and the UK. However, it is not just the military warfare that is driving some of the workers in these countries to seek a better life abroad, but the economic warfare waged mainly by the Western powers. Since the first Gulf war, the US and Britain have imposed economic sanctions on the Iraqi regime. Sanctions were also imposed on Syria and Iran. The economic cost weighed most heavily on the workers, with the political leaders remaining relatively unaffected. Many of the 27 who drowned were Kurds from northern Iraq. That many of the refugees are Kurds from Iraq, Syria and Iran is no accident. They are oppressed minorities in these countries. In Iraq and Syria Kurdish forces fought with western forces against Isis. When they were no longer of use to the West, they were abandoned to their fate (‘The West has played its part in driving migrants from home’, Patrick Cockburn, i weekend, 27/28 November 2021).

The liberal left talk about how refugees should be treated more humanely and that more legal channels should be opened up for them to come to the UK and make their claims. This, they argue, would reduce the risk of deaths. The SWP blames the Tory government for the deaths in the Channel. They claim ‘Anti-racists have to demand open borders and a welcome for refugees’ (Socialist Worker, 24 November). However, even the SWP acknowledges that the Labour Party is also in favour of taking action to stop Channel crossings.

Sadly, it is not just Calais that is a flashpoint in the refugee crisis. We have witnessed violent confrontations between refugees and border guards on the border between Poland and Belarus. Alexander Lukashenko, the president of Belarus, cynically encouraged refugees to come into Belarus and attempt to cross the Polish border, where they have met fierce resistance from the Polish border patrols. As we have seen with the situation in Calais, the refugees are being used as pawns in a dispute between two capitalist powers. Lukashenko wishes to put pressure on the EU to remove the sanctions that they imposed on his regime following his rigged election last year. It appears that Russia is backing him and may have their own interests in this game.

This conflict affords an opportunity for the Polish capitalist leaders to gain political kudos from the EU, with which they have been in dispute over their judicial reforms, by appearing to be defending the EU border against outsiders. The EU’s high-minded ideals of freedom of movement and respect for human dignity do not seem to apply to these refugees. They are hell-bent on keeping them out and there was even talk of building a wall (sounds familiar). Erdoğan, the Turkish president, also used the refugees as bargaining chips when he threatened to unleash them on the Greek border. The Moroccan government also made similar threats of doing the same at the Spanish border.

As with every crisis in capitalist society – unemployment, homelessness and workers relying on food banks – the refugee crisis has become ‘normalised’, yet there is nothing normal about it.

The refugee crisis spans the globe. According to the UN High Commissioner for Refugees there are more than 20 million refugees worldwide. As we have seen, war is a major driver for migration, but it is not the only one. Climate change is another which is rendering large parts of the globe, particularly the poorer parts, uninhabitable. And there is large-scale poverty.

The response of the major capitalist powers has been to tighten up their borders. Workers in these countries are encouraged to view immigrants and refugees as the other. Rather than see them as fellow workers with common interests, they regard them as competitors for jobs, welfare and health services. In the US, under Trump, a wall on the border with Mexico was partially built and migrant children were locked in cages. In the UK, a hostile environment towards immigrants was created which led to the Windrush scandal. The worldwide refugee crisis lays bare the utter brutality and cynicism of capitalism.

The leftist demands to create legal processes that treat migrants more humanely and calls for the sacking of right-wing governments can only scratch the surface. The fundamental problem is capitalism itself. In its drive for profits and division of the world into competing nation states, it creates the conditions that give rise to the wars, climate disasters and poverty that compel workers to leave their homes and seek sanctuary in safer places. What the world working class needs to do is combine democratically to obtain political power on a world scale to abolish capitalism and replace it with world socialism. National frontiers will be abolished and there will be one world community where everyone will be able to participate equally. There will be no wars or poverty and no need for people to flee their homes and seek refuge elsewhere.