Why do some Christians oppose vaccination? 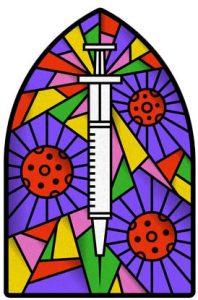 Some pastors call the Covid vaccination the ‘mark of the beast’, a biblical reference to the apocalypse. A Tennessee pastor who threatens to expel anyone who wears a mask to his church also discourages people from getting the vaccination, which he falsely claims contains aborted foetal tissue.

Yet the roots of vaccination hesitancy are much older and more interesting than that. Indeed, American scepticism of expert knowledge reaches back nearly three centuries, to a rebellion against religious authority.

During the first century of English settlement in North America, most colonists listened to university-educated pastors. Whether Congregationalist in Massachusetts or Anglican in Virginia, those pastors based their authority on their knowledge of Latin and Greek as well as of theology. Many dabbled in medicine. They were the experts.

But in the mid-1730s, charismatic preachers without college degrees suddenly drew huge crowds with harrowing tales of a furious God and wayward flocks. Embracing these revivals, the Rev. Jonathan Edwards of Massachusetts delivered one of the most famous sermons in American history, Sinners in the Hands of an Angry God (the title pretty much sums it up.)

The revivalists also denounced educated ministers as ‘unconverted’ impostors whose book learning led people away from real piety. One likened the regular clergy’s sermons to ‘rat poison’. Distressed by such attacks, Edwards pulled back from the fires he had stoked, calling for ‘humility and modesty’ in the face of conflicting views.

But the wounds of this religious revolution never healed. Unlike in crowded European countries, where congregants had to coexist, Americans kept spreading apart, moving west after 1800 and forming new churches that reproduced rather than resolved the bitter divisions that had begun back East.

As moderate Protestants began to stress the human capacity for progress with or without God’s help, wave after wave of revivals cast fresh doubt on anyone who claimed expert knowledge without divine inspiration.

New forms of fundamentalism emerged in the 1920s in response to Darwinian science and again in the 1970s in reaction to the women’s liberation and civil rights movements. While many Americans and Europeans drifted away from religion, except as a guide to moral conduct or a source of community, religious conservatives sustained the belief in God as an immanent presence in daily life — a power vastly superior to any kind of research or learning.

Some faith communities have embraced vaccinations and other medical breakthroughs, citing God’s benevolence and the golden rule. Yet modern evangelicals often see God as more stern than kind, encouraging a sense of epic conflict between the pious and the profane. And over the past few decades, evangelicals’ deep-seated distrust of society’s experts has merged with the increasingly nihilistic themes of the far right, creating a toxic disdain for science in general and public health in particular.

Which brings us back to our troubled present. COVID-19 surges again due to vaccination hesitancy and growing hostility to basic safety precautions, while the experts throw up their hands. How can understanding the long history of anti-expertise help us overcome this deadly impasse?

To start, those of us who are vaccinated must accept that the non-vaccinated aren’t just political pawns for religiomaniacs like Brian Tamaki and Billy TK. Rather, they are bearers of a long and complicated history, one that has often enlivened our culture.

After all, the mid-18th century revivals that tore apart so many communities also helped prepare the colonists to defy the Church of England, and thus the British Empire during the American Revolution. The revivalism of the 19th century often inspired anti-slavery activism.

In non-pandemic times, a healthy scepticism of expertise has made the western hemisphere a place of free-thinkers and rule-breakers.

On that note, public health officials should more directly address faith communities, making clear that each church has a right to worship God according to its traditions and to question science when people’s lives are not in immediate danger. By taking that vital step across the great cultural divide, the experts can more effectively dispel the wild conspiracy theories swirling around the vaccines. They might even make the case that getting vaccinated is the moral choice, the kind, caring and Christian thing to do.

Many won’t listen. But some will, and fewer people will die.

In the end, we can all learn something from the Rev Edwards, who had the wisdom to step back from his longing for spiritual revival and speak instead to the simpler, humbler virtues of coming together in dark times.