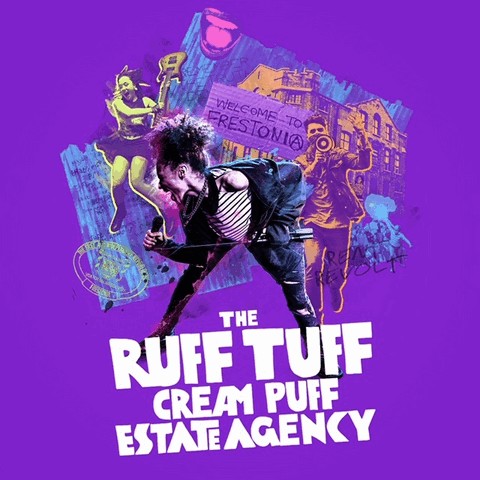 The squatting movement has a long history of searching for creative, practical ways to get around capitalism’s failure to satisfy needs as basic as housing. One story among many has been turned into an entertaining musical by Cardboard Citizens (a theatre group composed of people who have been homeless), playwright Sarah Woods and Boff Whalley, Chumbawamba’s guitarist. The Ruff Tuff Cream Puff Estate Agency is set in 1977, when there were an estimated 30,000 people living in squats among 100,000 empty houses in London alone. By this time, the eponymous estate agency had been running for three years, one of several services set up by and for squatters in the city, and the only one which ran as an estate agency, matching vacant buildings to people who needed housing. In an average day, it would be approached by 15 to 20 people made homeless through eviction, poverty or escaping violence who couldn’t or wouldn’t be supported by mainstream organisations. The police and social services even sent people there occasionally.

The play presents the agency as welcoming and open, and the enthusiasm of its members is warmly realised by an energetic cast. The properties they found or heard about were advertised in their bulletin with descriptions like ‘36 St Luke’s Road. Empty two years. Entry through rear. No roof. Suit astronomer’. The agency’s workers would break into the buildings, meaning that those who subsequently moved in weren’t committing an offence. The legislation in England and Wales has since changed, though, and squatting in a residential building was made illegal in 2012 (having been against the law in Scotland since 1865). This doesn’t mean that squatters in 1970s London were left alone by the authorities, though. The musical features undercover police monitoring the estate agency and officious landlords and council staff, all ridiculed by being played as deliberate caricatures.

The production could have lasted for longer, to go into more detail over what happened on Freston Road, then in Hammersmith. Supported by the estate agency, a community of 120 squatters were living there, and faced eviction when the Greater London Council planned to redevelop the area. The squatters responded by all adopting the surname of Bramley to support their application to be rehomed together as a family. Then they announced that Freston Road was now independent of the UK, and had become the ‘Free and Independent Republic of Frestonia’. The new self-declared country issued its own newspaper and stamps (accepted by the Post Office), ran its own art gallery and theatre and aimed to join both the UN and EEC. During the ’80s, Frestonia dropped its aspirations and morphed into an officially-recognised housing co-operative which still runs today.

As the musical depicts it, The Ruff Tuff Cream Puff Estate Agency lost momentum when its members had to focus on their own lives rather than their work. Trying to put free access into practice in capitalism would always be an uphill struggle, as it goes against how the economy and property laws operate. Although finding imaginative ways around the system isn’t the same as working to replace it, the determination of the agency’s staff meant that many people were helped into better situations, at least temporarily. The musical is an enjoyable celebration of them, as well as being an introduction to a lively aspect of working class history.