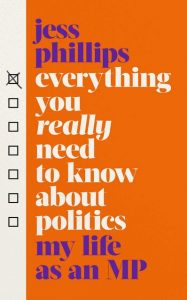 How To Be A Social Worker

Everything You Really Need To Know About Politics: My Life As An MP. By Jess Phillips. Gallery Books UK. 2021. £16.99

In some ways it’s difficult to dislike Jess Phillips. Forthright, sincere, energetic and passionate. Authentic perhaps too, if you can discount a tendency towards attention-seeking.

And this is what you get in this book. It is at times sad, at times funny and nearly always frustrating. Just like its author. How could it be otherwise when you have a politician who dedicates her life to helping other people get their lives back on track without ever seeming to question why their lives might have gone off track in the first place?

If you are homeless, unemployed or have been abused, you would do a lot worse than to have Jess Phillips on your side. Few reading this book about her day-to-day life as Labour MP for Birmingham Yardley could doubt the effort she puts into helping her constituents. Indeed, this is something she revels in as an MP who believes in ‘getting things done’ and there is a chapter dedicated to this (there’s also a chapter on ‘People Care About Potholes’, as if anyone doubted it).

She links her drive to help people back to her own upbringing and the support she had growing up locally in Birmingham and for initiatives like ‘Sure Start’ attributed to the Blair Labour government. She says: ‘We, the people, can absolutely get the government to adopt the things that we care about, whether these are big broad changes or niche, specific ones’ (p.116).

But there is little by way of recognition that this hard work and campaigning is bounded and ring-fenced by the way in which society is organised. You can, say, campaign to double the state pension and the minimum wage until you are blue in the face but the economics of the profit system tells us that these things just ain’t going to happen.

Unlike the Corbynistas she derides, Phillips is much more of a practical reformist. But the reality is that practical means small, incremental (‘niche’) and without fundamental challenge to the way the system works. And even small changes tend to be conceded by governments during periods of economic boom – Labour under Blair being a case in point until the financial crisis and all that came with it shattered their dream, revealing the harsh reality of what the market economy periodically does to purge itself. In doing so, creating unemployment, homelessness, drug addiction and all the other things that got worse when things were only meant to get better.

There are worse jobs than being a social worker, but like many local councillors, that is what Phillips effectively is. A well-paid social worker who gets on telly and social media a lot, trying her damnedest to empty the sea of social distress by the proverbial bucketful. Good luck to her perhaps, but don’t let it be confused with being a political agent for meaningful change, and you’ll find nothing about that here. 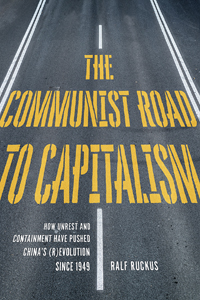 The Communist Road to Capitalism. How Unrest and Containment Have Pushed China’s (R)evolution since 1949. By Ralf Ruckus, PM Press, 2021. 233pp.

The explicit thesis of this book, expressed in its title, is that post-1949 China was initially a communist (or socialist) society, later shifting to being capitalist, which it is now. This shift, according to the author, began to take place after the death of Mao, from 1978 onwards, and finally led to the firmly established form of capitalism that China has today under Xi Jinping. Regular readers of the Socialist Standard will immediately take issue with this characterisation on the grounds that, while China today is certainly capitalist (state capitalist), it has been ever since the Maoist takeover of the country in 1949 and, though it called itself socialist or communist, it was so in rhetoric alone. All that has changed since then is the way Chinese capitalism has been managed by its rulers and the country’s increasing integration into the world capitalist market.

Having said that, there is little in the book’s detailed analysis of the social and economic history of China over the last 70 years to argue with. Painstakingly documented and indexed and with an exhaustive bibliography, this ‘critical historiography’, as the author calls it, chronicles the ups and downs (mainly downs) of the China of this period and the dizzying movements and counter-movements of a state with countless changes of policy and practice in which those ruling it are struggling with one another and with their people for control and supremacy. It also gives us an intimate view of the harsh experience of life for most people in China during the whole of this period. The only trouble is that these people are said to have been living in socialism (‘actually existing socialism’) in the first part of the period, when it is clear from the author’s own account that they were living in a ruthless state-capitalist regime where the privileged few running the system had both wealth and power and the vast majority, both peasants and workers, lived in conditions of poverty and powerlessness, in which they often had cause to fear for their lives and their safety and there was torture, death and suffering for millions. The author himself quotes an estimate that, during the so-called Great Leap Forward (1958-61), anything from 15 to 45 million people died of famine. All this is as far as anything could be from the leaderless democratic society of voluntary work and free access to all goods and services that is socialism.

So why does the author insist that what existed in China in the first 30 years after Mao’s revolution was socialism? He does so because he is espousing the view often expressed by those on the left of capitalist politics (and indeed by many who see themselves as Marxist) that socialism can somehow be brought about by a violent revolution in which a minority establishes state control over a country and then rules by some form of central economic plan, even though they then effectively constitute a capitalist ruling class. This ignores the reality (clearly seen and expressed by Marx) that socialism is only possible in a situation of advanced capitalist development where workers can vote it into existence and then run it collectively and democratically. Just as in Russia in 1917, where workers were not in a position to do that and so all that could develop there was some form of capitalism, so in China too in 1949 it was inevitable that Mao’s regime could only develop along similar lines. And it did – and in a brutal and at times particularly horrendous way, as well illustrated throughout this book. It has been especially bad for minorities of various kinds whose treatment is described as ‘assimilation, control, surveillance and repression’.

In the book’s preface, the author states that his motive for writing it ‘is a desire and determination to overcome capitalist exploitation and all forms of oppression, as well as to learn from previous attempts to accomplish this goal (even if they failed)’. This is obviously a laudable aim, even if we would not share his view that what happened in China was any kind of genuine attempt to achieve what we would call socialism. But in the concluding section, entitled ‘Getting Over Actually Existing Socialism’, he does refer to the need ‘to transform and topple capitalism’ and to establish ‘a classless society without exploitation and oppression’. He heads one paragraph of this section ‘destroy national borders’ and states that ‘abolishing capitalism means abolishing it globally’. So though he insists on calling Maoist rule in China ‘socialism’, he does seem to be moving in the right direction and as he puts it himself, to be learning ‘from the pitfalls of this past experience’.

As for the future of China itself (referred to by its current regime as ‘The Harmonious Socialist Society’), the author refers to the regime’s ‘astonishing ability to deal with social and political unrest, while retaining a certain level of popular support’. However, he seems hopeful, despite increasingly authoritarian rule, enhanced repression and ‘the criminalization of open disagreement and discontent’ (described by one writer as ‘terror capitalism’), that the social unrest this is likely to cause may lead to more enlightened government policies or at least a relaxation of repression. As the author details in the course of this book, such unrest has sometimes had beneficial effects for workers (who now constitute the majority of the Chinese population) and he draws a parallel with ‘the late 1980s in Eastern Europe’ where ‘we have seen other seemingly stable regimes crumble’. What is certain is that ‘belt and road’ China’s increasing integration into world capitalism and the need this generates for the free expression of ideas and invention for economic development to proceed are in the long term incompatible with an anti-democratic, socially repressive, one-party form of government.