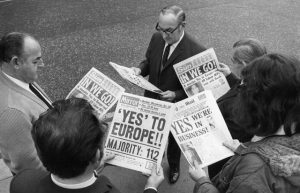 One notable, but not unusual, feature of the splits over the Common Market is that both the big parties are suffering at the same time. This makes it difficult for either of them to adopt the attitude of pious shock which they affect when only the other side is split. Then they can say that such disputes are evidence of their opponents’ irresponsibility. When they themselves are divided on some issue they claim that this goes to show what a lively lot they are, vibrant with debate yet tolerant and united enough to contain the argument and apply it for the benefit of all those voters outside. This is all part of the jolly game of politics.

In this country, it is the Labour Party who have become famous for their splits, very often splashing them into the public eye. This has tended to promote the idea that the Tories are more stable and united but there is some evidence that this is not true. Since the 1929 Labour government, the Labour Party have had only four leaders – Lansbury, Attlee, Gaitskell and now Wilson -and of these Lansbury was never more than a caretaker after the defection of Macdonald. During the same period the Tories have had seven leaders -Baldwin, Chamberlain, Churchill, Eden, Macmillan, Home and Heath -and in almost every case they have changed to the accompaniment of a public dispute.

At the same time, behind those gentlemanly Tory facades, there have been fierce splits over matters of policy. For example, Macmillan was much occupied with persuading his party to move out of the Edwardian (which he was said to personify) and to accept the decline of the British Commonwealth. This seemed to be no more than accepting the obvious and the inevitable, but Macmillan was bitterly fought by a strong section of the Tories headed by Lord Salisbury, who always looked and spoke and thought like an archetypal Tory backwoodsman. For Salisbury, the final blow was the surrender of independence to Cyprus and he resigned to snipe at the Tories for their policies on the old Empire and to mumble about the shocking treatment being handed out to our kith and kin in Rhodesia.