What Kind of System Change?

Much is being written at present both in this country and elsewhere about the evils of capitalism and the need to do away with that system and establish a different kind of society. Indeed, capitalism deserves blame not just for the massive economic inequality between people and peoples, but also for the wars and violence that constantly blight so many lives, the refugee problems often caused by those wars, the Covid pandemic and other epidemics that have broken out affecting millions and which almost certainly have as their root the quest for profit and, of course, the world’s climate and environmental crisis which threatens to devastate life on the planet. That’s why socialists try to spread the idea of an entirely different kind of society to replace capitalism, one which we call socialism. 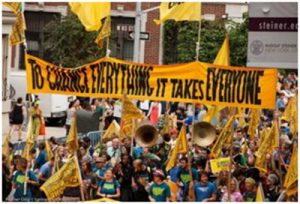 Unfortunately very few of those who argue for ‘system change’ actually share the idea of socialism that we have been putting forward since 1904. What we want is a moneyless society of free access, without buying and selling, which is based on from each according to ability, to each according to needs. Many people who also call themselves ‘socialists’ come close to this notion, but do not follow it through to its revolutionary conclusion, and instead end up arguing for and advocating something less, essentially a different, more ‘benign’ kind of capitalism, which is both futile and unachievable.

An example is in the arguments put forward by a group of ‘anti-capitalists’ called System Change Not Climate Change: An Anti-Capitalist Ecosocialist Network (bit.ly/3mq8TTA), whose focus is on the ecological damage caused by the capitalist system and the need to organise society differently to save the planet. One of their most recent expressions of this is in a well-written article by mathematical physicist David Klein called What Might an Ecosocialist Society Look Like? (bit.ly/3uAWhNg). This is especially interesting for socialists who are often asked about how a future society based on needs not profit would be organised, and who are always open to ideas on this topic.

Before attempting to portray what ‘ecosocialism’ would look like, the author seeks to explain why a different kind of society is needed in the first place. This he does this with both clarity and brio. He focuses on the ‘threat to life on Earth posed by the climate and ecological crises’ due to the use of fossil fuels and to global warming. He points to ‘habitat destruction, toxic dumping, plastic pollution in the oceans, radiation poisoning, and other customary products of the global capitalist economy’ all taking place despite widespread knowledge about it and despite ‘the flood of warnings from scientists’. He talks of food production for the advanced capitalist world relying on ‘heavily exploited human beings brought in from poorer countries’ and capitalism’s profit drive leading to ‘a system of animal slaughter and sequestration through factory farms of unprecedented efficiency, volume of production, and unspeakable cruelty’, while all at the same time failing to give decent food and shelter to large swathes of the global population. Nor is this due to lack of technology allowing people to be fed, housed, kept warm, transported and all else that provides a decent, comfortable life, in ways that are sustainable both for humanity and for the biodiversity of the planet. It is due rather, Klein argues, to capitalism’s built-in need for ‘unending economic growth’, consisting of ‘commodity production, escalating resource extraction, increasing trash and toxic dumping, and ever-increasing energy production’. Capitalism cannot solve the environmental crisis it has caused and in fact ‘can only make matters worse’.

So far we agree. But what of David Klein’s solution to the situation he describes? ‘Ecosocialism’ is the name he gives to what he calls his ‘vision for the future’. He states from the outset that there is ‘no universally agreed blueprint’, but he does suggest certain fundamental elements that could form the basis of the system he proposes. These include zero economic growth, ‘free’ services of certain kinds (eg, health care, education, transport), widespread community facilities, energy efficient housing, government control and coordination of large-scale industry, ‘publicly owned banks’, free basic foods and a ‘certain small income’ for all. He also sees such a system as doing away with fossil-fuel-driven industrial farming and the processing of unhealthy foods, and reducing the carbon footprint by ‘moving food production to the perimeters of cities, establishing urban and vertical food farms, promoting cuisines based on locally produced foods in season, and making food preservation a part of these systems’.

How will this vision be realised in practical terms? According to the author, by using a ‘Green New Deal’ approach involving policies like nationalisation of fossil fuels, renewable and energy conservation programmes and ‘a federal public-works program, similar to FDR’s 1930 depression programs’, all leading to ‘a new sustainable economy with higher wages and benefits’.

Some elements of the prescription outlined above (eg, local food production with a low carbon footprint) coincide with our view of how a post-capitalist society would work, but a good many others do not, and for good reason. The notion of certain kinds of ‘free services’ clearly implies that there will be some services that are not free, whereas socialists insist on free access to all goods and services. Then the mention of ‘government controlled banks’ and ‘higher wages and benefits’ makes it even clearer that what is in fact being proposed is not a different kind of society at all, but a variation of the present capitalist one, in the hope that it will be more benign. This is not a socialist society, since socialism is a society (and a world society, not the US-centric one the author seems to be presenting) without governments, without buying and selling, and certainly without banks. So long as these elements exist – money, banks, buying and selling – then as David Klein himself recognises, the core of capitalism, which is surplus value, will also exist, even if it is the state rather than private corporations that extracts this surplus from workers and invests it as capital.

We can of course agree with Klein – as with others who write in similar vein – of the need for ‘a revolutionary struggle to overturn capitalism and build a survivable system of human relations’. We also agree with him that this needs to be done by a united class of wage and salary workers and not by a focus on identity politics or the like. But we cannot agree that this can be done by campaigning for smaller or larger reforms within the existing system of money and wages, buying and selling, states and governments or by joining with some of the reformist organisations he recommends support for – Democratic Socialists of America, Food and Water Action, Sunrise Movement, System Change not Climate Change. Supporting the aims of these organisations within capitalism as a ‘meantime’ strategy can only prolong the agony that the system inflicts and postpone indefinitely the moment when a working-class majority democratically votes capitalism out of existence and brings in a genuine socialist society. In the end a genuine socialist (or ecosocialist) society can only be a moneyless society of free access without buying and selling, a society in which, as another commentator has written ‘everyone can go to the social storehouses and service centers and take what they need’. Anything else is a pipe dream. Socialism has to be a world of planned cooperation which takes advantage of existing technologies in a sustainable way and in which everyone can develop their interests and abilities with full social support and live without the ever-present threat of material insecurity – a true realm of freedom. A system that includes money, banks, governments and states can only mean more of what we’ve got already – inequality, rich and poor, environmental degradation, and antagonisms of all kinds.