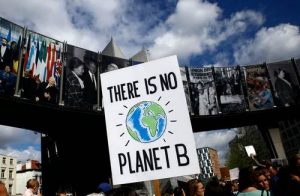 Same the whole world over

‘The Green Party, the Socialist Left and the Marxist-inspired Reds – all pro-environmental – are all expected to make gains and will seek to influence the next government, as will the rural Centre Party. Climate, wealth gap in focus as Norway go to polls’ (yahoo.com, 9 September). A similar Red-Green Coalition ruled 2005-2013 with Labour Party leader Jens Stoltenburg as Prime Minister. He has since become NATO’s General Secretary. The party’s current leader is the capitalist Jonas Gahr Støre. Once upon a time, Labour was considered ‘radical’: in 1919 it joined the Third International which had its headquarters in Moscow. Similarly, the Green Party was once concerned with alternative economics (who remembers BD Brochmann?), alternatives to military service, alternative energy, partial opposition to whaling (whale meat is still for sale) as well as going some distance towards the decriminalisation of certain drugs. The Socialist Left, formed in 1975, has its origins in a group which left the Labour Party over NATO membership. Interestingly, they were predictably against the US invasion of Afghanistan and Iraq but the Party leadership favoured NATO air strikes against Serbia over that country’s role in Kosovo (killing thousands and causing as many as 1.5 million people to flee as refugees). The ‘Marxist inspired’ Reds are, as history shows, anything but. The Red Electoral Alliance was formed in 1973 as an electoral front organisation for the Workers’ Communist Party. Much can be said about the WCP, but the Norwegian newspaper Aftenposten’s headline from 28 August 2005 probably cannot be bettered: ‘They worshipped Stalin, Mao and Pol Pot’. And one Vidkun Quisling was a Minister in government for the populist Centre Party’s earlier incarnation as the Farmer’s Party. He later led Nazi-occupied Norway. Eugene Debs’ WW1 remark remains apposite: ‘Yes, a change is certainly needed, not merely a change of party but a change of system, a change from slavery to freedom and from despotism to democracy, wide as the world’.

A Better World is Possible

This is the title of an essay by Dr. Cesar Chelala, which concludes: ‘We have the resources. What we need is a new look at life and its wondrous possibilities. I may be called naïve. But those who are not naïve are the ones that have led us into these wars. We can create a better world, if we truly want it’ (counterpunch.org, 3 September). Indeed. This call echoes others made in the past:

1859: ‘There must be something rotten in the very core of a social system which increases its wealth without diminishing its misery…’ (Marx in the New York Daily Tribune, 16 September). He observed that the ‘Irish famine of 1846 killed more than 1,000,000 people, but it killed poor devils only. To the wealth of the country it did not the slightest damage’ (Capital, Vol. 1, ch. 25).

1898: ‘Hence it has happened that the development of steam navigation, of railroads and telegraphs, of mechanical and chemical science, and the growth of the population, while enormously increasing productive power and the amount of material products—that is, of real wealth—at least ten times faster than the growth of the population, has given that enormous increase almost wholly to one class, comprising the landlords and capitalists, leaving the actual producers of it—the industrial workers and inventors—little, if any, better off than before’ (Alfred Russel Wallace, The Demon of Greed).

1923: ‘Such a great [socialist] production is already possible, with the knowledge already possessed by mankind’ (Sylvia Pankhurst).

1948: ‘A world of peace and friendship, a world with the plenty which modern science had made possible was a great ideal. But those in power had no patience with such an ideal. They said it was not practical politics’ (John Boyd Orr, former director of the Food and Agriculture Organisation).

1951: ‘It is time for mankind to ensure itself of material abundance by establishing a free, self-managed world society of productive labour, thereby freeing its mental powers for perfecting its knowledge of nature and the universe’ (Anton Pannekoek, A History of Astronomy).

All that is missing from achieving this is ‘the conscious will and action of the majority of the proletariat’ (Rosa Luxemburg).

‘You cannot have a system where the success of some springs from the exploitation of the workers and springs from the exploitation of the environment and the rest, and we have to correct that’ (yahoo.com, 17 September). Indeed, but our fellow socialists in the WSP(US) do not expect Nancy Pelosi to join them anytime soon as she makes clear elsewhere that she wishes to reform capitalism, not replace it. Other, sadly long-dead Democrats stated: ‘ All men are brethren. We denounce all political and hereditary inequalities and distinctions of castes… We believe the earth, with all its natural productions, to be the common property of all… We believe that the present state of society, which permits its idlers and schemers to monopolise the fruits of the earth and, the production of industry, and compels the working class to labour for inadequate rewards, and even condemns them to social slavery, destitution, and degradation, to be essentially unjust… We condemn national hatreds which have hitherto divided mankind… Convinced that national prejudices have been, at all ages, taken advantage of by the people’s oppressors to set them tearing the throats of each other when they should have been working together for their common good, this society repudiates the term ‘foreigner.’ We recognise our fellow-men, without regard to country, as members of one family, the human race, and citizens of one commonwealth, the world’ (Manifesto of the Fraternal Democrats, 1845).