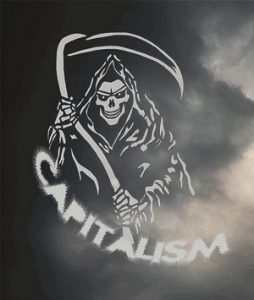 ‘To Beat Covid, Beat HIV, & Beat Inequality, Find the Money’. This is the title of a recent opinion piece by Winnie Byanyima and published on the Inter Press Service News Agency (ipsnews.net, 27 May). Other articles by her include ‘Overcoming COVID-19: World Leaders Must Finance a More Equal World to Beat Pandemics’, as well as ‘Coronavirus Proves Need for Free Healthcare for All – Now‘ and ‘The Next UN Secretary General Should Be a Woman – and Must Be a Feminist’. Such naïvety is echoed by many other writers found on this news site, alas, but at least, unlike the BBC, it is a safe refuge from non-stop coverage of royal funerals, births or other non-events. However, IPS whilst being a useful source of news not covered by mainstream media outlets such as the BBC, suffers from a relentlessly reformist, sometimes even rose-tinted perspective; which can lead to glaringly obvious blindspots. ‘Knowledge makes a man unfit to be a slave‘, said Frederick Douglass. We should fill in the blanks, be alert for media lies, distortions and half-truths, as well as conspiracy theories and ‘alternative facts‘. We should remember Marx’s favourite motto – doubt everything! – and this from his German Ideology (1845): ‘the class which has the means of material production at its disposal, has control at the same time over the means of mental production’. The BBC and IPS in their different ways support the status quo.

Sania Farooqui, author of ‘Women Leading Somalia’s Health System’ (ipsnews.net, 17 May) says ‘one of the doctors leading healthcare and currently involved in the fight against COVID-19 in Somalia is Dr. Deqo Aden Mohamed, an obstetrician-gynecologist… ‘ The doctor explains ‘the government runs only three hospitals here, so imagine in Mogadishu we have 4 million people and just three hospitals. The second wave of COVID-19 was much harder than last year. What we lost in one year’s time, we lost in one month in 2021’. Farooqui adds: ‘currently the country is grappling with the triple threat of drought, COVID-19 and insecurity in Mogadishu which is driving severe humanitarian needs in Somalia. Somalia has already seen a 48% increase in deaths from COVID-19, doubling of cases from 6,687 to 13,812 cases in just 59 days’. Grim reading, but this is only a partial account of suffering. An article in the Guardian last year (19 May) reported that Somalia’s coronavirus lockdown led to a huge increase in female genital mutilation. According to Plan International, circumcisers went door to door offering to cut girls stuck at home during the pandemic. Somalia has the world’s highest FGM rate with about 98 percent of women having been cut. Sadia Allan of Plan International commented: ‘We’ve seen a massive increase in recent weeks. We want the government to ensure FGM is included in all Covid responses‘. Dr. Deqo Mohamed has apparently made no comment on this matter.

‘Mauritius’ First Female President on Why We Need Science Diplomacy to Address Major Challenges’ by Stella Paul (ipsnews.net, 20 May) begins: ‘If we want to address the great challenges this world is facing, we have to factor science into all our narratives, according to Dr. Ameenah Gurib-Fakim, the first woman president of Mauritius’. This is a refreshing change from a malady of misleaders promoting ‘alternative facts‘, conspiracy theories and non-evidence based medicine, yet it should be remembered that Margaret Thatcher, FRS, Prime Minister of the UK for eleven years from 1979, the first with a science degree, graduated from Oxford University as a Bachelor of Science in chemistry. The new president does not mention Thatcher but acknowledges that ‘for the past few years, there has been an anti-science sentiment voiced by major leaders on this planet. And this undesigned sentiment has weighed very heavily again when it comes to addressing issues like climate science, for example, climate change and biodiversity. They have weighed in as well in terms of handling this pandemic that we are currently living in. So, I think if you want to address the great challenge that this world is facing, we have to factor in science into all our narratives’. All narratives? What, then, is the scientific basis for male homosexuality continuing to be a crime in Mauritius?

‘In The Socialist Party of Great Britain we are all members of the working class, and cannot hope that our articles will always be finely phrased, but we shall at least endeavour to lay before you on every occasion a sane and sound pronouncement on all matters affecting the welfare of the working class. What we lack in refinement of style we shall make good by the depth of our sincerity and by the truth of our principles.’ This statement taken from the first edition of the Socialist Standard in September 1904 remains true today, as does a quote attributed to Orwell: ‘during times of universal deceit, telling the truth becomes a revolutionary act’.‘ We are not alone. Other groups and individuals reveal truths too, at least some of the time. ‘Neither Israel, Nor Palestine: No War but the Class War ‘ (libcom.org, 22 May). ‘For too long our politicians, leaders & corporations have fed us the SAME lies, the SAME broken promises, the SAME too-little-too-late solutions, the SAME destructive fossil fuels ‘ (Jayathma Wickramanayake, @UNYouthEnvoy, 20 May).