My journey to becoming a socialist 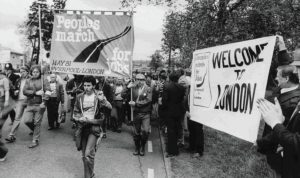 One cold Friday night some 40 years ago, I had what I have now come to realise was something of a serendipitous encounter with a complete stranger while enjoying a beer or two in The Horseshoe Bar, Glasgow, just before making my way to London on the overnight train to take part in what was called ‘The People’s March For Jobs’ demonstration at Hyde Park.

As a young member of the Society of Graphical and Allied Trades (SOGAT) printer’s union, I felt quite proud to be a banner-wielding protestor against Prime Minister Thatcher’s government and their total disregard and contempt for the working class, and somehow felt the need to express my anger the only way I knew how.

There was a good few dozen of us print-workers gathered from all around the multitude of factories based in and around Glasgow, with one particular thing in common – a distinct hatred of Thatcher and her Tory cronies.

Anyway, whilst in the throes of alcohol-induced rage and fury, I was approached at the bar by a chap with a distinct goatee beard who was also enjoying a refreshment or two.

‘What you up to young man?’ he asked.

‘Oh, on my way to London to join the People’s March For Jobs,’ I proclaimed proudly.

‘Well,’ I said ‘that bitch is closing down all the factories, and causing misery for everyone. I’m a socialist and I want to do something about it,’ I chelped back.

He erupted in laughter and told me that I had a lot to learn. He bought me a beer and invited me to get myself down to the Stirling Library at Royal Exchange Square in the heart of Glasgow some Saturday afternoon where I will find out ‘what a real socialist is’. Somewhat disgruntled by this I vowed to accept his challenge and see for myself just what this guy was talking about the next time I happened to be in the city centre.

The People’s March For Jobs came and went, and several months passed during which time I’d actually forgotten about my encounter with this strange man who dared to doubt that I was anything but a bona fide socialist. True to my word, I eventually headed on down to Royal Exchange Square whereupon I did indeed come across a group of mainly men taking it in turns to address a fair-sized crowd who had gathered to listen to them shouting about the forces of ‘capitalism’ and how ‘real socialism’ was the only solution to addressing the problems inherent in that disruptive and destructive worldwide system.

I was blown away and more than just a wee bit curious about the concept of this new world order that would revolutionise the way in which we functioned and interacted together as humans. A complete change from the current system of competition, to one of cooperation. From each according to their ability, to each according to their need. I just had to find out more.

There was about an hour or so of questions and answers from the assembled crowd – some of them quite forceful and aggressive, some very supportive and showing genuine interest – all of them answered articulately with superb confidence and knowledge by the same man who I met in the pub a few months earlier. The meeting began to come to a natural end and I hung around until there was only a handful of guys and a couple of women left. I was approached by one fairly well-spoken chap in a grey trench style raincoat, who asked me if I enjoyed the session and would I like to join them for a beer? Not one to turn down such an invitation, I found myself being made most welcome by this group of strangers in a local hostelry who were only too happy to answer this inquisitive young man’s enquiring mind about this thing called ‘world socialism’.

What an incredible experience! I left a couple of hours later completely awestruck by what these ‘genuine socialists’ had described to me as a ‘world of abundance’ where everyone will be free to live a life of their choosing and for the benefit of all. Instead of the way things are now, whereby we’re all enslaved by the wages system, and if you don’t have a job, you cannot afford even the basics of human needs. If you do, it’s only because you’ve been forced to sell whatever skills you have to the highest payer, and even then, only just about manage to survive. It all gave me food for thought, and I thought it was corrupt.

A lot has happened in my life since that fateful day. But one thing remains, my absolute conviction and determination to continue along with other like-minded fellow workers and true socialists – not the kind of wishy-washy reformists who think that by accepting piecemeal reforms handed down by the capitalist class and the politicians that they employ, we will somehow reach social equality for all – that’s not going to happen.

What I have discovered is that although we may well be slightly better off in terms of material goods and commodities than those of our forebears, this is still a far cry away from what is possible when the majority of us come to understand and realise what can be achieved with the will and determination to make it happen. Then and only then will we realise the true fruits of our collective labours, instead of handing them over to that privileged minority of parasites who feed off of our labour in order to feather their own nests with luxuries. The kind of luxuries that they proudly show off and boast of, while the rest of us look on in despair of their greed and the gross inequality that we have to endure under capitalism. Come join us, fellow workers. You’ve got nothing to lose but your chains. Who knows, maybe one of these days you too will be writing all about your journey to becoming a socialist in the pages of this journal.