There’s a long, long, list of things which are accepted as part of today’s world and which will sound barbaric and bizarre to those living in a sane future society. One of these is ‘tagging’ people convicted of a crime – ordering them to have strapped to their ankle a box which traces their location. Tagging, or ‘electronic monitoring’ as it’s officially known, is seen as a cheaper alternative to jail for some of those judged guilty of crimes such as shoplifting and fraud who are still required to be monitored. In a society based on free access to goods and services and with production owned and run in common, shoplifting and fraud wouldn’t be possible, and the reasons why people turn to crime today wouldn’t be there. And so people wouldn’t have to be subjected to something as dehumanising and demeaning as being fitted with a tracker. 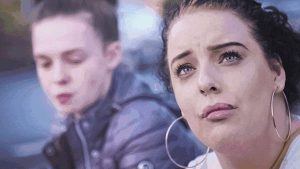 Tags have been used by the UK’s enforcement agencies since 1999, having been introduced in America during the early ‘80s. They record data about the movements of their wearers, checking that they are avoiding areas proscribed by the court, attending necessary appointments and keeping to a curfew. The tag sends a regular signal to a receiver unit installed in the wearer’s home, with alerts generated if the equipment is disconnected or if the wearer is not inside when they are required to be. An alert means that the wearer is in breach of the conditions of their sentence or bail, which could lead to them being sent back to prison. Since 2019, GPS technology has been used to more precisely identify a tag wearer’s whereabouts, with this newer generation of devices having cost £60 million. Each year, 60,000 people in England and Wales are ordered to wear a tag. 7,000 of these are women, three of whom were followed around by cameras for a recent documentary in BBC Three’s Tagged series: Women on Tag.

Amy and Stacey, both in their twenties, are living on tag in a stark bail hostel in Greater Manchester. Amy was placed there after a prison sentence for fraud, theft and shoplifting, while Stacey is awaiting trial for an assault charge. Jody, living in a flat in Cambridgeshire, has been convicted of burglary and is also wearing a tag until an upcoming trial. She and Amy both have children who were taken away from them when it was decided that their drug use and criminal behaviour meant they couldn’t provide adequate care. All three have a history of problematic drug use, which, as they explain, was a method of blocking out past traumas but which soon led to the routine of stealing to fund their habits. As the programme mentions, 49 percent of women arriving in prison have a drug problem, which is likely to continue inside. Little money and few opportunities pushed them into breaking the laws which are part of the system which put them in that situation. Jody describes her unsettled upbringing, guessing that by the age of 29, she’s had over 50 bedrooms through moving home so many times. Already pushed down by the system, she and the others now face the additional humiliation of being tagged. Stacey says ‘I feel like a robot’ while she stays by the wall for over two hours until her tag charges up from the mains. The documentary also finds a parallel with how animals are treated, when Amy and Stacey see a field of goats with tags stapled to their ears to denote who they belong to.

By the end of the programme, only Amy is looking forward to a better life, having been allocated a rented flat of her own. Stacey gets evicted from the bail hostel, loses hope and eventually gets authorisation to stay at a friend’s house while she waits for her trial. Jody is arrested for a breach of her conditions and returns to prison, with her daughter’s placement in care made permanent. So, the tags haven’t been as successful in controlling behaviour as they’re supposed to be. Figures show that over half of people fitted with a tag in 2018 didn’t comply with their curfew or tampered with the equipment (tinyurl.com/jkxvn353). Tags, along with prison and other punishments, aren’t able to prevent criminal behaviour because the people most oppressed by capitalism sometimes can find no other way to survive.

Regardless of their ‘effectiveness’, tags have been a money-spinner for the private companies which operate them under contracts with the Ministry of Justice. Senior staff in these companies have been much more audacious with their law-breaking than the people wearing their tags, motivated by greed rather than poverty. The Serious Fraud Office investigated Serco and G4S for attempting to defraud the state, and together they were fined nearly £178 million. Both companies hid the true extent of the profits generated by their tagging businesses, in the hope that the Ministry of Justice wouldn’t notice how favourable their contracts were and then try to decrease their revenue. Serco and G4S were stripped of their contracts, and in 2020, some of G4S’s senior executives were charged with fraud. If the justice system has a sense of irony, at some point they’ll be fitted with the tags they used to profit from.