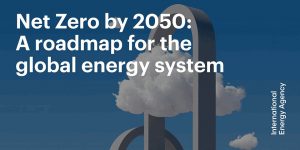 In May the International Energy Agency released a report entitled Net Zero by 2050: A roadmap for the global energy sector (https://www.iea.org/reports/net-zero-by-2050). The 224-page report describes itself as ‘ the world’s first comprehensive study of how to transition to a net zero energy system by 2050 while ensuring stable and affordable energy supplies, providing universal energy access, and enabling robust economic growth’.

Universal energy access? Stable and affordable? Even someone supportive of capitalism would be inclined to say ‘pull the other one’. If a commodity is to make a profit, it can’t be so cheap that even the poorest can afford it, so the idea of universal affordable energy is already a non-starter before you’ve got past the introductory blurb.

But the roadmap is nothing if not ambitious, ‘setting out more than 400 milestones for what needs to be done, and when, to decarbonise the global economy in just three decades.’ A forest of charts and graphs are there to underline the gigantic strides that capitalism needs to make, each one liable to have the supporter of capitalism once again muttering sceptically, especially given the admission at the start that global state commitments are ‘well short of what is needed to limit the rise in global temperatures to 1.5°C and avert the worst effects of climate change’.

Even if we had socialism – a global society of democratic and cooperative common ownership where the imperatives of profit and commercial growth would be absent – this might be a tall order given the time frame, although doable because we wouldn’t have to battle with private competing interests. More to the point, if we had socialism already, the world wouldn’t be in this situation in the first place. The independent behaviour of private actors seeking profits regardless of ‘externalities’ has driven us to the brink of a global tragedy of the commons that would not have occurred if the commons were truly owned in common. Now, even the International Monetary Fund is starting to talk in shrill terms about a potential extinction-level event: ‘There is growing agreement between economists and scientists that the tail risks are material and the risk of catastrophic and irreversible disaster is rising, implying potentially infinite costs of unmitigated climate change, including, in the extreme, human extinction’ (bit.ly/3hKMP5z).

We don’t take this view, as it’s hard to imagine anything short of a planet-busting asteroid taking out all of humanity, and we don’t subscribe to a counsel of despair because we say there is a solution – urgently getting rid of capitalism and letting socialism off the leash. Failing that, capitalism is going to have one hell of a job slamming on all its brakes simultaneously in order to stop short of the abyss. Can it succeed in doing what looks like the impossible? We don’t know. We’ve learned not to underestimate capitalism’s ability to adapt, and in the past year’s pandemic we’ve seen it do things that previously people would have said was impossible, albeit it at a staggering cost to itself. And that’s just the trouble. Capitalism has been knocked for six, having just paid out the equivalent of a world war due to the pandemic. If you think that’s an exaggeration, the Second World War is thought to have cost around $23 trillion in today’s money. The IMF estimates the cost of the pandemic to the global economy as $28 trillion (bit.ly/3bOEU3g). So not only does capitalism have to do the seemingly impossible, it has to do it under the worst possible economic circumstances.

This desperate task becomes all the more farcical when you realise that ‘net zero by 2050’ is not actually good enough, because it’s aimed at limiting global temperature increase to 2°C, not the 1.5°C target as specified by the Paris agreement and which would require ‘net zero by 2030’. What difference does half a degree make? Maybe not much, maybe all the difference in the world. The Energy Watch Group, often highly critical of the IEA in the past for being too soft on fossil and for being a poodle of the USA, issued a report last December entitled ‘The path to climate neutrality by 2050 misses the Paris climate targets – The rocky road to truthfulness in climate politics’. It quotes the IMF ‘extinction’ scare cited above and goes on to explain why 2°C might be too close for comfort: ‘It is widely scientifically recognised that a global temperature increase by more than 2°C threatens to lead to a so called Hothouse Earth scenario in which human civilisation as we know it can no longer exist’ (bit.ly/3hKMP5z).

Is that true? Well, it’s true that +2°C ‘threatens’ to do so, because of tipping points and feedback loops following each other ‘like a row of dominoes’, at which point ‘we see that the Earth system tips over from being a friend to a foe. We totally hand over our fate to an Earth system that starts rolling out of equilibrium’ (bbc.in/3bJNAb6). But it’s an unquantifiable threat and nobody really knows for sure. On the one hand, the Earth has certainly been hotter in its history than it is now, without turning into Venus. On the other hand, there have also been five mass extinction events involving upwards of 80 percent of life forms, and climate may have been a factor in some of them. As a researcher from York University reported to Scientific American in 2007: ‘There have been three major greenhouse phases in the time period we analyzed and the peaks in temperature of each coincide with mass extinctions’ (bit.ly/3f9nX5O).

One might wonder then if there is any point in the IEA issuing a so-called roadmap for the Paris Agreement, given that the likelihood of capitalism being able to follow it looks so remote, and given that it’s not ambitious enough anyway. But if there is an agreement, there has to be a roadmap, however rocky and untruthful it is. Whether or not the planet is facing an existential crisis, capitalism is certainly suffering a credibility crisis. It has no answer to the environmentalist’s well-aimed charge of requiring ‘infinite growth on a finite planet’, and more and more people are waking up to that fact. But the policy makers have to say something, and look as if they’re doing something. US climate envoy John Kerry was held up to ridicule recently for saying that the climate would be stabilised using technologies that don’t exist yet (bbc.in/3v7oElE), but he illustrated a fundamental truth about how today’s politicians think about the future. By 2050, all this will be somebody else’s problem.