The moment of history we all currently live in is called capitalism, a time when people are constrained to spend a good part of their waking day working for an employer for a wage or salary in order to live. We are ‘constrained’, because for most of us our work in the form it exists is not what we’d choose to do if we didn’t need to get money to live and to provide for ourselves and our families. That is not to say that, in a different kind of society, we would not choose to do a day’s work as such. In fact we would, because work is an important human need, but we would certainly not choose to do it for an employer in a job under conditions of take it or leave it. We would choose to do work we genuinely wanted to do under reasonable conditions and without the gun of material insecurity at our head. Under a different social system than capitalism, we would do a day’s work that was meaningful to us, that suited us and also suited and supported the collective social effort to produce and distribute goods for human need rather than for profit.

Profit is in fact what underlies and generates the production and distribution of goods and services over the whole planet – in the UK, in the rest of Europe, in the USA, in Russia, in China, in Cuba, in India, in Africa, in fact everywhere we look. The rule is no profit no production. And that’s what ties us down to the kind of working day that we’ve not chosen and that most of us would not do if we were free to choose. To take a small example, who would choose to do the job a man does at a supermarket I go to shop in which consists of sitting looking at a screen at the entrance to the store all day and checking to see if anyone is stealing or looks as though they’re stealing? The obvious answer is that no one would freely choose to do that. Yet we can be sure that, if such a job were advertised, the wolf from the door imperative would mean there were many applicants. As Noam Chomsky recently put it: ‘You are allowed to rent yourself to survive. It’s called taking a job’.

To give another example which says even more about the way society is organised and its priorities, a recent Channel 5 television programme illustrated the reality not only of having to take whatever work is available but also of the grotesquely wasteful way in which this society expends human energies and resources. The programme was about the efforts being made to catch people who use the London Transport system without paying their fare or at least without paying their full fare. A huge network of computers and other machinery filling a whole building has been set up employing large numbers of people to catch out the offenders and present them for punishment. One of the programme’s focuses was on two of the employees at the sharp end, those whose job it was to approach suspected offenders, especially those who’ve found a way of underpaying their fare on the underground and have been identified on the computer and camera system. As the suspects exit their train or station, it’s the job of these employees, who are obviously very apprehensive themselves after waiting around sometimes for several hours, to pounce and to try and stop or apprehend the fare dodgers. Some of the scenes, of the encounters, are not difficult to imagine. They prompt the question: Who would want to do a job like that if they didn’t have to? And, of course, the waste of energies and resources involved in the whole operation are quite mind-boggling. And this is the kind of thing that’s repeated many millions of time over across the whole planet – a microcosm of the waste of talents, energies and resources that the market and the profit system generate. How correct is the observation once made that the waste of all kinds generated by this system is so vast and complex that, were anyone to attempt to measure it precisely, they’d be doomed to failure. 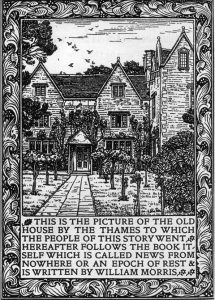 But how would work be different in the kind of moneyless, wageless society of free access and voluntary cooperation that the Socialist Party has been advocating consistently for well over 100 years? Is it possible to give a detailed account of what it would be like? Probably not, since, as Marx put it some 150 years ago, to attempt to explain in detail what that future society would be like would be akin to writing ‘recipes for the cookshops of the future’. Others have tried to do this however, for example William Morris, in his late 19th century novel, News From Nowhere. But inspiring as Morris’s book was in concept, social development soon made its detail look precisely what it was – speculation. In the same way, if, say, 50 years ago – so before the age of modern electronic communication and production, someone had tried to set out a typical day’s work in socialism, it would be sure to seem obsolete now.

In the same connection, the Socialist Party’s pamphlet How We Live and How We Could Live: from Capitalism to Socialism, published in 2006, contained a list of 150 products and occupations associated with money that would not be necessary in socialism. While it’s true that these would be obsolete in a moneyless socialist society, the fact is that even now in capitalism, only some 15 years after the list was published, a good many of the terms in it already seem old-fashioned. This is because capitalism has evolved quickly with the changes and technology advances it incessantly brings into being. So words from that list which are now all but obsolete because the functions and activities they describe have all but disappeared, are, for example, football coupons, cheque cards, telephone meters, overtime payments, pension books, travellers’ cheques, Christmas clubs, luncheon voucher schemes, rent collectors – and that’s to name just a few. Of course, many of the products and tasks listed still do exist, but who knows how many of them will in, say, 10 or 20 years time and how many others we’ve never heard of will have come into being by then?

So if it’s difficult to give an accurate detailed picture of what life will be like in capitalism in say just a few years’ time, how could attempting to describe the precise details of a future society based on completely different premises be any more than speculation? What we can say for sure, however, is that, as long as capitalism continues, worker will continue to compete with worker for jobs, business will compete with business for sales and profit, and nation will compete with nation over sales of goods and services, spheres of economic and political interest, control of trade routes and sources of raw materials. And what we can also say is that the environment will continue to be despoiled instead of conserved. And in all this the individual worker will continue to be a passive spectator swept along by economic forces over which he or she has no direct control.

However, if we can’t give a detailed account of life in the socialist world that urgently needs to be established by the world’s workers, what we can state with certainty is that it will consist of people carrying out meaningful and personally and socially fulfilling tasks in which they realise their potential as human beings. And this will be part of the broader planned organisation of a social system that the population as a whole will have decided to adopt in place of what exists at present. It will be, as one writer has put it ‘a new form of life that does not organise itself around wage work and monetary exchange’, a society in which ‘everyone can go to the social storehouses and service centres to get what they need’. And how will all this be planned? The pamphlet, ‘Socialism as a Practical Alternative’, puts forward some interesting ideas on this. For example, it suggests the following: ‘We would divide up responsibilities while taking into account individual aptitudes and proclivities. Some tasks would need to be performed locally, but many could be planned on a regional or global scale, using advanced computer technologies.’ But this too, in the end, is also speculation and has to be seen as falling into the realm of ideas rather than prescriptions.

What is patently clear is that human beings are doers and that, when the whole structure of capitalism and the colossal waste of energies and resources associated with its money system – banking, insurance and finance, the accompanying military apparatus – cease to exist, those energies and resources will be released for all of us to involve ourselves in being doers in a truly meaningful way and to fulfil our needs at all levels, to engage in what’s been called ‘useful labour’.

This kind of world has been excellently outlined in a recent book highly sympathetic to the socialist objective (Automation and the Future of Work by Aaron Benanav), which refers to a world of ‘fully capacitated individuals, in which every single person could look forward to developing their interests and abilities with full social support’.

A final point worth making – and one that has been advanced by many articles in the Socialist Standard over the years and by many books on the subject – is that human beings are essentially a cooperative species. We enjoy reciprocating, working together – even under the constraints of a non-cooperative system like capitalism – and all these cooperative energies will flourish and allow us to flourish in the new society we bring into being. Martin Luther King, not a figure often easily associated with socialism, was surely spot on when he said: ‘Profit forces people to be more concerned with making a living than making a life.’ And it’s only socialism that will allow all of us, on a world scale, to set about making that life.

One Reply to “Capitalism, socialism and work”