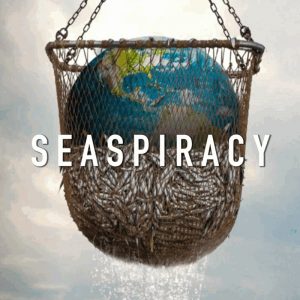 Big waves were caused recently by the release on Netflix of the documentary Seaspiracy, which sets out to harpoon the supposedly sustainable global fishing and aquaculture industry. A furious backlash by industry insiders immediately ensued, accusing Netflix of screening ‘vegan propaganda’. Netflix however, keen to drag an increasingly vegan-oriented millennial audience away from YouTube, won’t care about treading on a few people’s raw sushi.

First-time film-makers Ali and Lucy Tabrizi travel the world to research the documentary, showing at times considerable courage in evading arrest, or indeed much worse. What they discover is shocking and designed to shock. It takes nerve to watch a whole dolphin pod being hacked to death with cleavers, even more to see real footage of humans being shot in the sea. Former slaves in Thailand relate being press-ganged and made to work at gunpoint on trawlers for years, and executed and thrown over the side if they refuse. The filmmakers have to flee in a car chase to the airport with a criminal gang in hot pursuit. An industry spokesperson at a trade show laughs and denies any such nonsense. EU ministers offer bland assurances. Environmental charities dodge the issue. This is an industry which, the documentary makes plain, will stop at nothing to prevent the public from knowing what really goes on.

This is an unregulated and often illegal industry in which vast factory ships trailing miles of floor-scraping nets drag the ocean for everything it contains, including not just the target fish but also ‘by-catch’, variously estimated at between 10 and 50 percent, which is then thrown back dead. The impact is global and catastrophic. When the Deepwater Horizon oil spill occurred in 2010, instead of marine wildlife in the Gulf of Mexico being destroyed as predicted, it actually recovered, despite all the oil, because commercial fishing had been suspended. The tragedy and the irony is that the oceans would recover easily enough if humans would just leave them alone. More whales would help us too. Marine life is a huge carbon sink. A tree absorbs up to 48 pounds of CO2 a year. Each dead whale that sinks to the ocean floor sequesters 33 tons for centuries (bit.ly/3eg2pma).

The scale of marine destruction is not common knowledge. Catches are supposed to be ‘dolphin-safe’, and sustainable, and there are industry-approved labels to certify it. But the documentary makes clear that none of these certifications mean anything, because there is no way to enforce them. It’s too expensive for observers to go out with every boat and check, so they only have the captain’s word that no by-catch was destroyed in the process. Issuing agencies get paid by the industry to certify catches as ‘dolphin-safe’, a clear conflict of interests. ‘Sustainable’ doesn’t mean what we think either, that fish stocks are 100 percent healthy. Some species have seen population crashes of up to 90 percent, and ‘sustainable’ may only mean that they are being fished at just above extinction level.

Then there’s the fact that marine trawling is the biggest food-related carbon emitter after beef and lamb farming, equivalent to global air travel, and dwarfing that from pigs, chickens and grain crops (bit.ly/3teagaa). And while we are encouraged to obsess about plastic straws and cotton buds, a media displacement strategy that George Monbiot, a contributor in the film, describes as ‘micro-consumerist bollocks’ (bit.ly/3mHlku9), fishing produces up to 800,000 tons of discarded heavyweight plastic fishing gear a year, making up approximately half of the Great Pacific Garbage Patch and destroying untold wildlife.

Monbiot lambasts the BBC for making nature programmes that never spotlight the destructive fishing industry (bit.ly/329VSE9). In fact the BBC’s own Reality Check journalists went over Seaspiracy and failed to find much to criticise (bbc.in/3tiLqGu). There were some out-of-date statistics though, which gave ammunition to the doc’s detractors. Yet data is a perennial problem. You can’t just count fish in the sea like cows in a field, so fish stocks are guesses. Catches can remain level while stocks plummet, because of greater trawling efficiency. The documentary says 50 percent by-catch, other sources say 10 percent, but with no monitoring there is no way to know. The film perhaps has a motive to paint a bleak scenario, but the industry has an equally strong motive to dismiss all concerns. Who do you believe?

Just before Seaspiracy aired in March, New Scientist also looked at the global fishing industry (13 February – bit.ly/3a8UDJL). This article was slightly more upbeat, pointing to some small improvements, yet came to the same broad conclusions. Since 1950 the human population has gone up by 175 percent, but fishing by 750 percent. Despite three global agreements to stop the decline in fish stocks, almost nothing has been done to reverse the trend. And fish farming is no solution, because it’s a net consumer, not a producer of fish protein. More human-edible fish are fed into the aquaculture system as fish meal than come out as product, at a ratio of anywhere between 3:1 and for tuna, 20:1. And this is quite apart from the 22 million tons of fish – nearly 30 percent of the human-edible catch – fed to domestic livestock for the meat industry, once again with back-to-front protein ratios (bit.ly/3mYpk9H).

So if industrial fishing is so bad, and fish farming is no answer, what’s the solution? Don’t eat fish, says the documentary. It’s true that the health benefits of fish are overrated, despite the NHS advice to eat more of it. Omega 3s aren’t made by fish, but by the algae they consume, so we could just make edible foods directly out of the algae.

But telling viewers not to eat fish is meaningless unless you also tell them not to eat animals or keep pets fed on them, or use products made with them, and in any case overlooks the bigger picture. The fishing industry is just one aspect of a spectacularly destructive global production system which operates the way it does because it makes money. And where money leads, destruction follows. As the fish stocks fall and the prices go up, the plundering will if anything increase. Capitalism is a war of profit against humans, profit against wildlife, profit against the planet, all for the benefit of a few billionaires, and changing your diet isn’t going to change that. The only thing that will is to get rid of capitalism, and share the world as a democratic cooperative. If you want to save the oceans, being vegan is not enough, you also have to be a revolutionary.