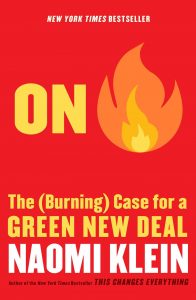 Naomi Klein: On Fire: The Burning Case for a Green New Deal. Penguin £10.99

Klein has written previously on climate change; in This Changes Everything from 2014, she described it as ‘a battle between capitalism and the planet’. Here, in a series of articles and talks dating from 2010 to 2019, she discusses various events (such as the Deepwater Horizon explosion in 2010 and the ‘summer of fire’ in 2017). She emphasises the interconnectedness of many issues (‘climate, capitalism, colonialism, white supremacy, and misogyny’) and puts forward the idea of a Green New Deal as a way to solve the problems.

There is much useful material here. Oceans are warming 40 percent faster than the UN predicted in 2014. Hotter, drier weather creates the conditions for wildfires, and there is a feedback loop, whereby burning carbon leads to warmer temperatures and less rain, hence more fires, which in turn release more carbon into the atmosphere. Climate change hits the poor worst, whether in Africa or New Orleans or the refugees who flee war and drought. The factors destroying the planet are also destroying people’s quality of life. We are experiencing ‘the dawn of climate barbarism’, and individual action is simply inadequate.

But there is also quite a bit that is less impressive. A disappointing (to put it mildly) speech to the 2017 Labour Party Conference suggests that Klein has uncritically swallowed Labour’s reformism and plans for nationalisation. She views incrementalism and moderation as problems, yet does not in fact go beyond these. Her own plan is for the Green New Deal: this is seen as similar in some ways to the New Deal of the 1930s in the US, though as less top-down and not consumption-oriented. It is intended to address ‘the triple crises of our time’: ecological problems, economic inequality and white supremacy. It envisages investment in renewable energy and a minimum global corporate tax rate, so combining the reduction of pollution with improving the conditions of the most vulnerable. (For a UK version, see greennewdealgroup.org.)

Renewables are seen as job creators, so there would still be jobs (and taxes). And Klein is not against capitalism as such, only its supposed ‘unregulated’ variety. She says that ‘autocratic industrial socialism’ has been an environmental disaster, and she clearly equates socialism with the Soviet Union and Venezuela. This is a shame, as she acknowledges that climate science constitutes a powerful argument against capitalism, and discusses the view of some right-wing climate change deniers that the issue is some kind of plot to shackle or even abolish capitalism. They’re wrong, of course, but the climate and other ecological issues do provide yet another reason for doing away with the wages-prices-profits system.
PB 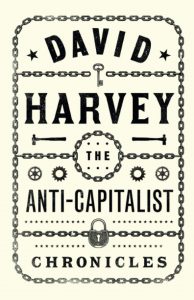 This is more a collection of short essays than a comprehensive book. Harvey remains impressive as ever when explaining the basic ideas of Karl Marx succinctly and effectively, including such things as the operation of the rate of profit and how it relates to technological change.

The intent of the book is to give print form to Harvey’s regular podcast output, and the editors suggest it is a good accessible gateway into Harvey’s work and thoughts.

The chapters are thus short, and slightly repetitive, using the same examples (eg. that China has used more cement in two or three years than the US has done in the past 100). But that reflects the bite sized nature of the chapters, the book can be picked up and put down.

The focus across chapters is on the difference between mass and rate. Harvey notes that we should be more concerned about the mass of carbon dioxide we have already put into the atmosphere, rather than think about the rate at which we are adding more carbon. Likewise, he notes the importance of examining the mass of profit rather than just the rate of profit when examining the operations of the capitalist system (and he also gently uses that to criticise the Marxist writers who see the fall in the rate of profit as the key feature of capitalism).

As a geographer, he has useful insights into the geopolitical goals of China, and particularly notes how the brutal treatment of the Uighur may be connected with their attempts to control central Asia and thus cement a position as the predominant power on Earth. This is also joined by useful comments on the ‘second nature’ of the urban environment, as well as a useful discussion of his notion of accumulation through dispossession.

There is also a useful discussion on the place of the concept of alienation in Marxian thought, which includes a light sketch in how the notion has been examined in the second half of the twentieth century and the usefulness of continuing to apply it as a tool of analysis today. Particularly, there is an interesting discussion of how the notion of alienation might be used to examine the rise of Donald Trump as a symptom of the disaffection of the deindustrialised areas of the United States (he goes into dispiriting detail of the betrayal involved in the closure of a Detroit car plant).

Disappointingly, Harvey sees modern capitalism as too complex and interrelated to be changed wholesale, and instead looks to micro-changes and warm words. The book is thus long on analysis of capitalism but short on actual concrete anti-capitalism.

As a pedagogue, Harvey includes a selection of discussion questions for each chapter and further reading at the end of the book. These are actually good questions, and going through them might be a useful exercise and worth the price of the book.
PIK SMEET 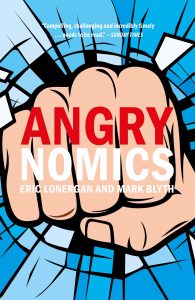 The economist Mark Blyth and hedge fund manager Eric Lonergan postulate that anger takes two distinct forms, public and private. Public shows itself in protests, strikes and xenophobia (tribal), while private anger shows itself as mental health issues and despair. They assert that policies enacted by most of the current ‘neoliberal’ governments have failed to address this underlying public anger and that that is the main reason for the recent rise in the popularity of right-wing populist governments. The analogy of hardware and software to describe some of the economic mechanisms to support their arguments is unconvincing. Fintan O’Toole’s book, Heroic Failure, provided more convincing arguments for the shift in the public mood away from neoliberal ideology and the rise in nationalism.

There are references to the French economist Thomas Piketty’s Capital and his idea of a wealth tax. However, they never get around to properly criticising his ideas, despite the promise in the text. They introduce their ‘big’ idea of taxing corporations for use of the public’s personal data, and then investing this in the stock market. They estimate a high return of 6 percent invested over a 15-year period, which might seem unlikely given the volatility of the market. This scheme seems more likely to increase commissions for the financial services sector while having no impact on the immediate issue of the huge growth in inequality and the dearth of ‘decent’ jobs, poor public healthcare and lack of social housing. 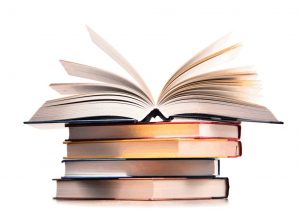 The above ideas are just tinkering around with the capitalist system in a classical Keynesian way. They will not prevent the insatiable advance of capital accumulation and the continued rise in inequality and anger of the dispossessed working class.
NICK SAMPAYS