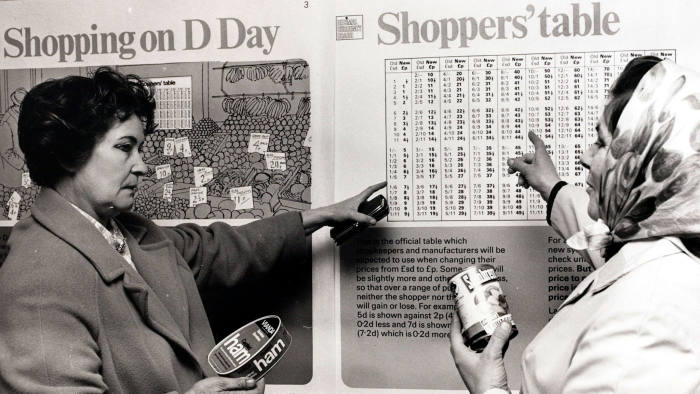 Whatever difficulties people may meet with in handling the metric currency changes on 15 February the changes themselves will have no effect at all on the main operations of the British monetary system or its standing in world currencies. New names will be given to some old coins, and three new ‘coppers’ will appear, the new 2p, 1p, and ½p but the total amount of ‘copper’ coins, about £200 million, will not be altered on D day, nor will the notes in circulation, about £3,660 million. One change has however already been introduced which distorts somewhat the Bank of England’s weekly figures of note circulation. This was in November 1970 when £96 million of ten-shilling notes ceased to be legal tender, thus dropping out of the Bank of England’s note figures, having been replaced by the same quantity of the ten shilling (50p) ‘silver’ coins.

After D day, as before, the pound will still have the same exchange rate with the dollar (about $2.40), and with the rest of the currencies inside and outside the European Economic Community.

This does not mean that the changes have no great significance; this will only become apparent some years ahead if Britain joins the European Six and if the Six themselves succeed in setting their, at present deadlocked, negotiations about moving towards a single European currency.

The D day changes are a first step aimed at an eventual situation in which there will be only one currency covering the whole of Europe, just as the dollar covers the whole of the USA and the rouble the whole of Russia.