The Pace of Change 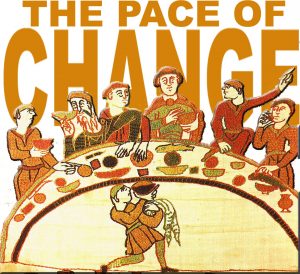 Capitalism in England began at 5 pm on Saturday, 14 October 1066, when William the Bastard became William the Conqueror. This, to some, will appear a contentious proposition, after all that was surely the advent of feudal supremacy.

However, while the Norman nobility and church secured their domination behind the daunting walls of castle and cathedral, ensuring the mass of the peasantry remained firmly bound to the land, there was one group of commoners spared such ties.

The Normans liked rabbits. Not fluffy bunnies as playthings for their children, but as the meat in pies and stews. So it was that along with the mail-clad knights came the warreners. Although of common stock, unlike the peasants they were free men.

Warreners, as the name suggests, constructed warrens, the means of production, which was their property not the local lords’, for cultivating rabbits. These rabbits were rare and valuable, not being native to Britain nor adapted to the climate, and they were sold on the market as commodities.

Thus, at the very moment of the triumph of feudalism, an element, a very minor element, of capitalism was introduced. The question is, when did the implicit principle really begin to become the explicit economic tendency that challenged, then superseded feudalism? Choose your own significant historical moment.

The point here relates to a frequently made assertion that Covid 19 marks a fundamental change in society. That people’s consciousness has significantly changed. Society must find a new way to go about its business.

Socialists will say amen to that (alright, perhaps not amen) if it means people more generally begin to grasp that their best interests are served by collectively deciding to end capitalism. Replacing it with a system of common, democratic ownership of the means of production and distribution to freely meet everyone’s needs is surely an attractive prospect.

Unfortunately, the evidence at the moment seems to indicate no such general ambition. There is a radical change in distribution, but it’s from high street and mall to online, a switch from one set of capitalist enterprises to another. The actual production of commodities remains largely unaltered.

This will entail large scale redundancies amongst those employed in the high streets and malls, impacting also on the social environments. Such is the nature of capitalism. What seems like a fixed dominant industry is quickly swept away by those infamous market forces.

For example, coal mining was regarded as a traditional industry in South Yorkshire, but it existed as a major force for little over a century, already well into decline before the 1984/5 strike. Much of what replaced it was lower skilled and paid. As with King Coal, so it was with Queen Cotton in Lancashire.

And so it’s likely to be with changes today, with zero-hours-contracted delivery drivers and warehouse hub workers replacing salaried (with pensions) shop workers. Consumer capitalism will continue to dominate.

Is this a counsel of despair for socialists, the more things change, the more they stay the same? Not at all. Firstly, it shows people can adapt rapidly to change. It wasn’t that long since it was popular to refer to ‘retail therapy’ as a leisure activity. This arose from the development of the huge out-of-town shopping centres.

They were a change in themselves, drawing huge numbers away from towns. Come a technological advance, IT, add a pandemic, and there is a new retail equation, readily accepted. The point here being that the catalyst of change, in this case Covid-19, cannot be predicted.

It would be all too easy to view a socialist party founded well over a hundred years ago as having failed in its quest to further the realisation of socialism, as capitalism remain ideologically, as well as economically, dominant.

However, as Engels indicated in The Peasant War in Germany, a revolution cannot occur and succeed before its time. Any attempt to force the issue ends in disaster, it certainly doesn’t end in socialism.

What will precipitate a change in the general economic, political and social views of a significant majority of the world working class cannot be artificially engineered or foretold. Socialists can only persist in maintaining the political resources as widely available as possible for the working class to draw on when ready.

Socialists can also keep up a constant critique of capitalism and all it entails to feed into the general discourses of society. Even hearing the oft-made comment, ‘I like your ideas, but they’ll never work in practice’ is positive. The notion has been planted, the negative can be worked on.

To return to the warreners. It is unlikely they spent much, if any, time fretting over whether or not the free market would eventually become the successor to feudalism. They would have gone about their business looking out for any other opportunities that came their way.

Perhaps there were those who thought it might be more generally beneficial if society adopted their freer way of working. Surely there were peasants who looked to the warreners and thought their lot could be improved by similar social and economic arrangements.

Yet, for hundreds of years, feudalism maintained its ideological grip until a pandemic, the Black Death, loosened its grip. A peasants’ revolt notwithstanding, it would be centuries more before the warreners became mill owners.

There is no time scale for, and no certainty of, the achievement of socialism. Whether the Socialist Party ultimately plays a significant or insignificant role in that achievement cannot be known now. For the moment though, today’s socialists are the warreners adding the freely cultivated meat to the political stew.