Guy Shrubsole: Who Owns England? How We Lost Our Land and How to Take It Back. William Collins £9.99. 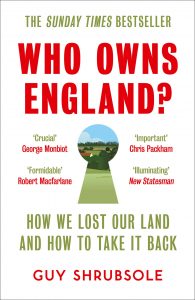 The answer, of course, is a small number of very rich people. Thirty percent of land in England is owned by the aristocracy and gentry, 17 percent by ‘new money’, 18 percent by companies, 8.5 percent by the state, and just five percent by homeowners, with another four percent spread among crown, church and charities. Even these figures leave around one-sixth of the land unaccounted for, such is the difficulty of acquiring information about land- ownership, as ‘concealing wealth is part and parcel of preserving it’. The rise of digital technology has made investigating who owns land somewhat easier, but it is clear that the author has devoted a great deal of effort to uncovering the information provided here. He operates the website whoownsengland.org, and it is also worth looking at whoownsscotland.org.uk, which is separately run but deals with similar facts and figures.

Another way of describing the extent of inequality is to say that just 36,000 people own half the rural land in England and Wales. The origin of this dates back to Norman times, when William the Conqueror handed out land to less than two hundred clergy and barons. Many aristocratic land-owning families can be traced back to those days, such as the Dukes of Westminster, who remain unbelievably wealthy. Male primogeniture has played a large part in perpetuating the wealth and power of a small group of aristocrats. Much of the land they own is given over to grouse moors: apart from grouse shooting being a thoroughly nasty ‘pastime’, managing the moors can lead to environmental problems, such as flooding downstream.

Aristocrats became wealthy through owning land, but those with new money have bought land as a result of becoming wealthy. An example would be the Vestey family, who derived their wealth from selling cheap meat, purchased country estates and, like so many other landowners, used trusts and tax havens as a means of protecting their wealth. They have been joined more recently by Russian oligarchs and those who reap massive profits from Middle Eastern oil, both of whom specialise in properties in central London.

State ownership of land means primarily the Forestry Commission and the Ministry of Defence. The biggest corporate owners are privatised water companies, and also such as Peel Holdings, which, among much else, owns the Manchester Ship Canal and land adjoining it; Peel’s owner is a billionaire who lives on the Isle of Man, and it exercises power via a mass of subsidiary companies. Peel Holdings ranks only 33rd in Shrubsole’s list of land-owning companies, though it probably owns much more than the 15,000 acres attributed to it.

The author provides an excellent survey of land ownership and how it came about, though with relatively little on the enclosures that played a major part in the emergence of capitalism. Read his book for what it says about the past and present situations, not for the reforms proposed in the final chapter, such as ending unsustainable uses of land, which will be impossible in a society of private property but straightforward when the land belongs to everyone. 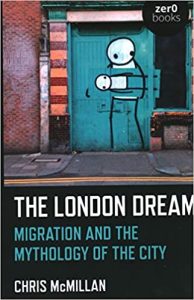 Subtitled ‘migration and the mythology of the city’, this is a critical look at London and the immigrants who are attracted to live and work there. McMillan writes broadly through a lens of Marxist class analysis, though also draws heavily on some of the ideas of non-Marxists such as Richard Florida, who has written extensively about the ‘creative classes’ within capitalism and the dynamic turbulence of which they are an intrinsic part. In London’s case, much of this is perceived as being centred on the so-called ‘flat white economy’ and Silicon Roundabout in Shoreditch, though it stretches much further and wider than this.

For McMillan, the ‘struggle between the hope of the London dream and the exploitation it fuels’ is the main focus of his investigation. Through analysing a variety of themes and sectors (the cleaners that service the City of London travelling in on the night buses, to jobbing actors and writers seeking their fortune but struggling to make any sort of living, through to the Uber drivers), McMillan does a good job of laying bare the exploitation that keeps the city going. He interviews a number of people who have come to London to chase their dream and is mature and reflective in analysing their success (or – largely – otherwise). In this respect he knowingly treads some similar ground to Ben Judah’s excellent This is London, which we reviewed in the Socialist Standard in June 2016.

London is now very much the ‘world city’ and whereas in 1951 as few as 5 percent of the population was born outside the UK, now the total is well over a third and growing – indeed two thirds of children born in London today have at least one parent who was born outside the UK. The Huguenots and Jewish refugees of earlier stages of capitalism have been replaced by Afro-Caribbeans, Bengalis and latterly eastern Europeans and those seeking their fortune and new experiences from the old colonies like Australia and New Zealand. But it is the low-paid, gig-economy jobs they typically fill – the waitresses, bartenders and delivery drivers. While two-thirds of registered London black cab drivers identify as ‘white British’ this only applies to 6 percent of Uber drivers, many of whom sometimes earn as little as £2 per hour net pay.

Though the book seems to be marred periodically by an unusually large number of typos and similar errors, McMillan is a good writer and brings the city and its people to life. He ends by saying: ‘London is a city of hope, a city of misery. A city where there is always something to do and no shortage of precarious workers struggling to do it. It is all part of the London dream. And still, they come. But for how much longer?’ (p.258). True enough, though what the book really lacks most is a re-imagining of the city in a way that transcends capitalism itself and the exploitation it engenders. But it is a stimulating read and a book that demonstrates that all that glitters in not all gold – and why.

Woman in a man’s world 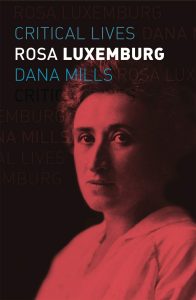 In her introduction Mills says that hers is a feminist biography, as one that concentrates on Luxemburg’s life as a woman in a man’s world, not just generally but also within the Social Democratic movement in which she was active all her adult life until her murder in 1919 at the age of 47. Hence, a couple of references to ‘patriarchal capitalism’ (even though not a term that Luxemburg would have accepted) and to Luxemburg as a ‘Jewess’ (often a term of abuse but one which feminists might be expected to want to rehabilitate).

The book is about both Luxemburg’s personal life and her political and economic ideas. These latter are explained accurately enough. There is, however, an odd passage in Mills’s account of Luxemburg’s Accumulation of Capital where Mills writes:

‘Marx took ideas from Malthus (without referencing him), claiming that there was a tendency towards deficiency of demand in the market for commodities that capitalists produce to create surplus value. The question arises: who has the purchasing power to buy those commodities?’

A footnote refers to pages 93-4 of David Harvey’s A Companion to Marx’s Capital. Harvey is not always reliable on Marx, but here Mills has misread him. Harvey was not saying that Marx ‘took ideas from Malthus’ but merely that he was discussing them (without, apparently, giving their source). In fact Marx never claimed that there was ‘a tendency to deficiency of demand’ under capitalism and rejected both Malthus’s view that there was and his proposed solution (consumption by aristocratic landowners, sinecure holders and other non-producers). Luxemburg didn’t think much of Malthus’s solution either but she did accept that, among others, he had identified a problem. This set her off on the wrong track as there is no built-in shortage of purchasing power under capitalism; she was seeking a solution to a non-problem.

In her personal life Luxemburg had man friends without getting married; her tastes in music, literature and art were conventional even bourgeois; she had a cat and, as her letters written while in prison for opposing the First World Slaughter showed, a love of nature. A lot of people do but it is rather weak to say that this meant she stood for ‘environmental justice’ (whatever that is). She was rather more radical than that. She was a socialist.

All in all, the book is an interesting and informative read.