Trump and lying as a tactic

The reign of President Trump in the United States has been characterised by open deceit. Many of his opponents berated the media for not calling his lies outright lies, but even when they have, it has not scratched the levels of support he possesses among his millions of followers. A recent example was following the revelations, in the Bob Woodward recorded interviews, that Trump had tried to downplay the seriousness of Covid 19, while knowing full well the danger it posed (as he later found to his cost). His team’s response was to announce that Trump had never played down the seriousness of Covid, despite him – on tape – saying he would and the plethora of public statements that can demonstrate that he did. That does not matter, they are sticking by the lie.

As Gary Kasparov, former Soviet chess grandmaster, has had occasion to point out, the purpose of such lies is not just to deceive, but to prove loyalty by seeing who is willing to swallow their pride and utter deliberate untruths that they know not just to be untruths but unconvincing ones at that. Kasparov had experienced this first hand in the Soviet Union and under Putin. It is an exercise in raw power. It promotes the cult-like following President Trump has whipped up.

Of course this is nothing new. As Marx and Engels wrote in The German Ideology:

This accounts for so much of the noise around Trump: as a billionaire capitalist who surrounds himself with millionaires, centimillionaires and the billionaire Betsy DeVos, and who took the reins of power from the career politicians, he refuses to think and act like a career politician with the sensibility and decorum usually demanded of a candidate or office holder. The Democrats who find Trump uncouth are precisely the technocrats Noam Chomsky warned about in his essay The Responsibility of Intellectuals, who believe that ‘the age of ideology is ended, supplanted, at least in the West, by a general agreement that each issue must be settled in its own terms, within the framework of a Welfare State in which, presumably, experts in the conduct of public affairs will have a prominent role’. (chomsky.info/19670223/).

Those ‘experts’ dominated the Clinton, Blair and Obama governments. As the late David Graeber pointed out, they represented the ‘peculiar fusion of public and private, market forces and administrative oversight, the world of hallmarks, benchmarks, and stakeholders that characterizes what I’ve been calling centrism is a direct expression of the sensibilities of the professional-managerial classes’ (tinyurl.com/rmeyu88). Professional-managerial classes who value procedure over substance, the upshot of which is worth quoting at length:

‘All this also helps explain the otherwise mysterious popular appeal of the disorganized, impulsive, shambolic (but nonetheless cut-to-the-chase, get-things-done) personas cultivated by men like Trump and Johnson. Yes, they are children of privilege in every possible sense of the term. Yes, they are pathological liars. Yes, they don’t seem to care about anyone but themselves. But they also present themselves as the precise opposite of the infuriating administrator whose endless appeal to rules and demand for additional meetings, paperwork, and motivational seminars makes it impossible for you to do your job’.

The anger against the infuriatingly anodyne procedures designed to smother conflict in the workplace and society lies behind much of the willingness to submit to the enthusiastic lies of Trump. Added to this is the conviction that Trump’s Democrat rivals are themselves pathologically dishonest (albeit they prefer more plausible lies).

Some of this stretches back to Trump’s role in ‘birtherism’, the unshakable belief that Barack Obama wasn’t really American enough to be president (despite production of his birth certificate). But it also goes back further to things like 9/11 Truth, and the refusal to believe the ‘official story’.

His most fervent acolytes have been found through incidents like the 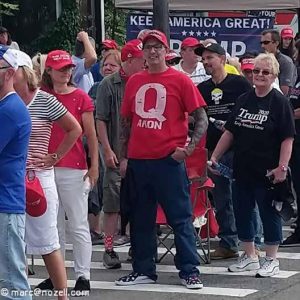 Pizzagate furore (the belief that high ranking Democrat officials were meeting at a Washington DC pizza restaurant that was a front for human trafficking and paedophilic abuse). It was totally false, but one man decided to take action, and attack the restaurant. There has also been an arson attempt. The man claimed to believe he was freeing the children (en.wikipedia.org/wiki/Pizzagate_conspiracy_theory).

This story has since merged with QAnon. Q is a putative member of the Whitehouse staff, leaking the ‘real’ agenda to the Trump administration. It is best summarised by the Wikipedia entry:

‘QAnon is a far-right conspiracy theory alleging that a cabal of Satan-worshiping pedophiles running a global child sex-trafficking ring is plotting against President Donald Trump, who is battling them, leading to a “day of reckoning” involving the mass arrest of journalists and politicians. No part of the theory is based on fact’ (en.wikipedia.org/wiki/QAnon).

Q posts gnomic comments on various right-wing communities boards, and his followers seek to decode them, believing that Trump is playing a long game against entrenched powerful interests, until the day they will all be arrested and tried. His lies are part of that game against the corrupt officials who infest Washington.

Q followers post on Twitter under the hashtag #WWG1WGA (‘Where we go one, we go all’) as a sort of rallying cry. They also post a lot under #SaveTheChildren. The centrality of the paedophilia claims is curious. Certainly, it is common to impute absolute immorality to opponents. In this instance, partly, it is a method to gain support by finding people who will be upset by the horror of child abuse. It is also likely that this is an imaginary sublimation of the idea that their enemies are taking something precious away from them, and children are the most precious thing most people possess (as well as being metonymically linked with vitality and the future).

Dan Olson, in his YouTube video In search of flat Earth (www.youtube.com/watch?v=JTfhYyTuT44), puts forward the analysis that the QAnon believers are actually engaged in a form of violence. Their whacky ideas are not about debate but about forcing people to choose sides (firstly by weeding out adherents who don’t buy the theory wholesale, then by closing 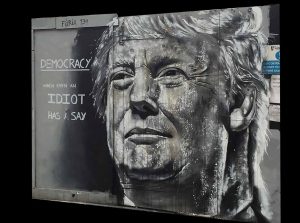 down debate with anyone who tries to argue with them factually). QAnon is a refusal to see a structural problem, instead believing the system itself is being subverted by infiltration, which must be fought by any means necessary, including outright conscious lying. They want to shut up the critics of the system.

Trump turned himself into a danger to the world by clamping down on US state-sponsored climate science. Lies are a weapon against humanity. They cannot simply be debunked, the antidote is the building of conscious analysis of the way the world really is, and finding a constituency willing to listen to that truth that is bigger and better organised than the QAnon cultists.