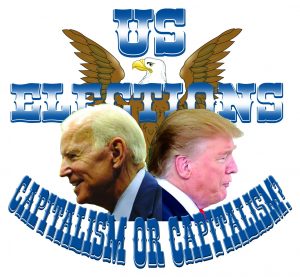 America is at the cusp of deciding the nature of its future, or at least it thinks it is. It has two scarcely distinguishable options, Democrat Joe Biden and incumbent Donald Trump. The Trump presidency has already had an effect on America that will long outlast his second term, should he get one. The wildfires sweeping the West Coast have had fuel thrown upon them by the rapid destruction of what little environmental regulation there was before Trump. Nominal wages have gone up steadily over the last four years, but cost of living has been growing faster, far outstripping the growth in wages. This is to make no mention of the coronavirus crisis – the United States has seen an exceptionally high death rate – almost 200,000 cases as of writing. Liberals often wax lyrical about the death of ‘American culture’. While Trump’s campaign has undoubtedly had a palpable effect on the way political issues are discussed, how it is a death of American culture is unclear. Indeed, the liberals’ biggest failure was to miss the fact that the seeds for the Trump victory were sown by the Democrat presidencies. And this is the mistake they are repeating in 2020.

The shock from liberal commentators four years ago has still not worn off. The first term of Donald Trump’s presidency is coming to an end – and liberals are still in such disbelief that he might get a second. There is no attempt to empathise with the many working class Americans who voted for Trump – an immense irony, given editorials in the liberal press such as ‘When A Heart Is Empty’ (New York Times, 10 September). In it, David Brooks, a noted moderate conservative, writes, ‘[Trump’s] is not an intellectual stupidity. I imagine Trump’s I.Q. is fine. It is a moral and emotional stupidity. He blunders so often and so badly because he has a narcissist’s inability to get inside the hearts and minds of other people. It’s a stupidity that in almost pure clinical form, flows out of his inability to feel, a stupidity of the heart.’ How do we square this with the fact that Donald Trump won in 2016? Liberal commentators will struggle to.

The truth, contrary to Brooks’ charge of ‘emotional stupidity’ is that Trump has managed to win the hearts and minds of a huge amount of the American working class. How? By going against the establishment. Trump has criticised Hillary Clinton for being a Wall Street shill and a criminal, the Democrats for throwing America into war after war, and the mainstream media for consistently marginalising swathes of views – particularly those favoured by workers. The thing about these claims is that they are all correct. His Twitter, laughable as it may be, is so obviously not ghostwritten. It is unprofessional, direct, unpretentious – one might even say it is, in a rather odd way, down to earth. Trump has not taken himself to be entitled to votes. On the other hand, Joe Biden said to a black voter who was on the fence that, ‘If you have a problem figuring out whether you’re for me or Trump, then you ain’t black.’ Odd, coming from someone who thought desegregation would lead to his children growing up ‘in a racial jungle’, and that ‘poor kids are just as bright and talented as white kids’. If these comments had come from Trump, they would be plastered on every headline. In this case, the liberal media tries to pass it all off as a joke (Washington Post, 22 May). It is precisely this difference between the Democrats and Trump that has led to the polarisation seen in American politics – the working class has realised that the Democrats have done nothing for them. The elitism and political careerism of the mainstream Democratic party has become an unmissable stain on their campaign.

Of course, Trump’s greatest success is that he has managed to convince working class Americans that he represents them. Sure, he has pointed out some of their issues, but the policies he has put in place have done nothing to resolve them. Perhaps this just goes to show how out of touch the Democrats are: even lipservice to the American working class is more than they have done. This might be the backbone of the Trump strategy – if you convince enough working people, but also evangelicals, racists, and so on, you can garner enough of the vote to go back to serving your real constituency: the capitalist class. Trump’s policies have been mostly typical rightwing corporate welfare, combined with a sort of protectionism that hasn’t been seen in a while. Trump may be marking the end of the neoliberal world order, replacing it with something that could even more straightforwardly be described as American hegemony.

This is actually not entirely accurate: Trump has been forming close alliances with some of the world’s most ruthless dictators, notably the Brazilian Jair Bolsanaro, and Russia’s Vladimir Putin. Steve Bannon, the former chief strategist in Trump’s cabinet, has become somewhat of a left-wing bogeyman, uniting nationalist and right-wing leaders worldwide, including Marine Le Pen in France and Nigel Farage in the UK. Something bigger is at work, and it is keen to captivate ‘the masses’. Populism has become a political slur thrown around by liberals that describes this phenomenon. Socialists understand that there is a political and economic elite, whose interests are opposed to those of the workers. It’s clear why liberals, the elite in question, want to deny that this is the case. The rightwing has managed to capture the same sentiment but their claims about who the elite is differ from ours immensely.

The Democrats had a left-wing populist candidate – indeed, one who was popular with some Trump supporters: Vermont senator Bernie Sanders. Sanders was the most radical mainstream American politician by far, drawing on a tradition that has been left mostly untouched since Eugene V. Debs, one of the founders of the Industrial Workers of the World. American social democracy could have tried to win the election by tapping into the anti-establishment sentiment that has taken hold of the workers. Of course, the mainstream Democratic Party, as a representative of capital (no different to the Republican Party) would rather have Trump than Sanders. Shenanigans in the election process were conducted accordingly. Even Trump pointed out that the alternative left-wing candidate, Elizabeth Warren, was only in the running to split the Sanders vote.

There is clear discontent within the American workers: particularly the youth. The majority of millennial Americans are not afraid of the word ‘socialism’; in fact they prefer it to ‘capitalism’. Liberals are keen to point out that they never lived through the Cold War, and that this might explain their lack of hostility to socialism. Or, it might be that thirty-year olds have lived through four recessions. For a great liberal hero, liberals seem remarkably unkeen to listen to Adam Smith: ’No society can surely be flourishing and happy, of which the far greater part of the members are poor and miserable’. Yet, the Democrats, based on nonsensical concerns of ‘electability’ keep advancing centrist candidates, who are just grist to Trump’s mill. The Democrats ran the electability experiment with Clinton. It failed. Yet they are trying it again with Biden. The workers feeling so disenfranchised that ‘did not vote’ makes a significantly higher category than either Trump or Clinton votes in 2016. Perhaps if ‘did not vote’ amounted to a vote for no president at all, the country would be better off.

At any rate, the election draws near. If Trump manages to secure another victory, the consequences for the environment will be disastrous. One would hope that working class Americans will have seen through the ruse, but as long as the mainstream opinions are strictly limited to Democrat and Republican, there is going to be little progress. A socialist might reasonably worry that the age-old choice between socialism and barbarism is being made, and that the people are choosing barbarism.