In 1969, The Sun newspaper was a left-leaning broadsheet, believe it or not, and one which was running at a financial loss for its owners. This all changed when it was bought by Rupert Murdoch and relaunched as a more populist red-top tabloid to directly compete with the Daily Mirror. As part of this revamp, The Sun started to feature photos of topless women, and within 12 months its sales had doubled. Since the 1970s, ‘page three’ has been most associated with The Sun, although such photos have also appeared in other tabloids. A recent documentary on Channel 4, Page Three: The Naked Truth, told the story of this seedy tradition and how it has portrayed and affected women and girls. Unsurprisingly, it’s money which has driven the ‘page three’ industry. Lucrative contracts have drawn people in to being ‘glamour models’, there to make profits for publishers and promoters.

The 1980s was when ‘page three’ was most well-known, especially after Samantha Fox became a household name. When she was aged 16, her mother sent clothed photos of her to the Sunday People for its ‘Girl of the Year’ contest. This led to a photoshoot, and Fox agreed to topless photos thinking they wouldn’t be published, as she was still at school. She and her family were shocked when they saw one of these pictures plastered on the Sunday People’s front page. Fox remembers being told by a photographer ‘you’ve got the face of a child but the body of a woman’, and only realised how sinister this was in hindsight. Some newspapers had sickening ‘countdowns’ to when their models reached 16 and they could be shown partially naked. All of this was somehow acceptable, or at least just something to put up with. It wasn’t until 2003 that legislation came in to make 18 the minimum age to appear unclothed in print.

The age of models wasn’t the focus of campaigns against ‘page three’ during the 1980s, when attempts were made to ban it entirely. In 1986, MP Clare Short introduced a Private Members Bill which proposed prohibiting newspapers from publishing sexualised pictures of naked or partially naked women. When she raised this in the House of Commons, many male MPs’ reaction was laughter, and presumably they were those whose votes made the bill fail. For The Sun, who branded Short a ‘killjoy’ and ‘fat and jealous’ when she renewed her campaign in 2004, this was decent publicity as much as anything.

As summed up by Clare Short, ‘what page three says is ‘take me, use me, throw me away’’. This isn’t only an attitude towards women which ‘page three’ photos encourage among the public, it also describes how models have been treated. Being groped (i.e. sexually assaulted) on a chat show or being preyed on by drunks at parties were seen as part of the job. A particularly sad example of how women have been treated is what happened to Emma Morgan. In the 1990s, her boyfriend sent a topless photo of her to the Sunday Sport, which printed it without her knowledge. That Morgan (like Fox) wasn’t considered important enough to even be asked if she minded having such an image published highlights the extent to which women have been demeaned. Morgan’s modelling career started by being used and it ended in a similar way, when she says she was set up by an undercover journalist who filmed her taking illegal drugs. The story appeared in the News of the World with the headline ‘Page 3 Girls’ Drugs And Vice Scandal’ and as a result Morgan lost her contracts, spat out by the same industry which had got her into the situation.

An argument in support of ‘page three’ is that women are free to choose their own roles, and if they enjoy being a model, then why not? Some of the models themselves would agree with this, but it rings hollow to those who were tricked into starting a modelling career, often when still a child, or who found this was their only opportunity to escape poverty. The wealth and the celebrity lifestyle came at a price for Emma Morgan and others. Debee Ashby, like Samantha Fox, first had topless pictures published without her consent at the age of 16, and later regretted her subsequent modelling career, as it led to her suffering from bulimia and undergoing therapy.

The decline of ‘page three’ came about not through changes to legislation, but following a 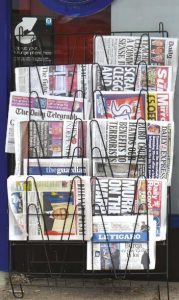 grassroots campaign run by author and actor Lucy-Anne Holmes. Her ‘No More Page 3’ crusade began in 2012 when she noticed the disparity between how men and women were depicted in newspapers. She says that men were represented as active and industrious, but photos of women on page three were sending out the message that they have to be ‘pretty and passive’. Holmes said that the campaign wasn’t against pornography as such, just that a ‘family newspaper’ isn’t the place for it. Three years later, The Sun retired ‘page three’, although not on its website until 2017. The Daily Star didn’t stop printing photos of topless women until 2019, and the Sport newspapers still continue the degrading tradition.

Of course, it’s a step forward that fewer people now believe it’s acceptable for women – and girls – to be reduced to ‘page three’ fodder, but the feature’s demise doesn’t seem all that significant considering that far more extreme images can easily be found with a few clicks of a button. It’s likely that ‘page three’ has largely died out more because newspapers can no longer rely on softcore porn to sell copies than due to campaigns. What’s profitable has shifted away from print to online. So, rather than ‘page three’ being brought down, it’s instead been superseded. The market will find new ways to objectify women as long as there’s money to be made.