Capitalism continually creates the conditions for confrontations between countries concerning the control of resources and trade routes. Socialists never tire of pointing out that the primary function of military power in capitalism is to protect and expand control over resources, markets and transport routes on behalf of the capitalist class of the country concerned.

America’s ‘deputy sheriff’ in the South Pacific, Australia, is significantly beefing up its armed forces, increasing military spending by $270 billion over the next ten years. Australia is set to acquire 200 long-range aircraft-launched anti-ship missiles and other capabilities to deter future conflicts. It will also invest in developing a hypersonic missile defence system. There is a $50 billion future submarine project and a $7 billion underwater surveillance network to detect submarines approaching Australia’s coast. 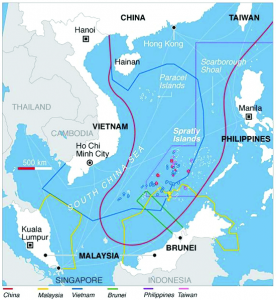 In July, the USS Nimitz and USS Ronald Reagan, two US aircraft carriers, conducted naval exercises aimed at demonstrating its superior naval capabilities over China. The United States accused China of intimidating its South East Asian neighbours. The United States declare that freedom of maritime navigation is an issue of ‘national interest’ and for another country to challenge America is to effectively declare war upon the United States, which is exactly what China appears to be doing in the South China Sea, a resource-rich and highly contested waterway. The loyal camp-follower of the US, the UK, has also periodically sent its warships into the contested waters to protect ‘freedom of navigation’.

While those aircraft carriers were on patrol, China engaged in its own military drills near the disputed Paracel Islands. China is constructing its second aircraft carrier and also investing heavily in submarines, to be equipped in the future with ‘carrier-killer’ ballistic missiles.

Armament imports by Indonesia, Vietnam and Malaysia have all increased and much of the weapon types being purchased are for a potential sea war. The acquisition of such sophisticated weapons indicates two things: first, that South East Asian nations are wary of China’s intentions and secondly, they are tooling up for a possible war.

Aside from China’s claim of sovereignty, Brunei, Malaysia, the Philippines, Taiwan and Vietnam also lay claim to parts of the South China Sea, a busy sea lane with a third of the world’s shipping passing through various straits and choke points carrying $3 trillion of trade, while half the world’s fishing boats operate in its waters as well as there being a number of the region’s undersea internet cables. The oil en route to East Asia through the South China Sea is many times the amount that passes through the Suez Canal and the Panama Canal. The energy supplies for South Korea, Japan and Taiwan as well as China come through the South China Sea.

They also all seek to exploit the extensive oil and gas reserves which exist. Oil 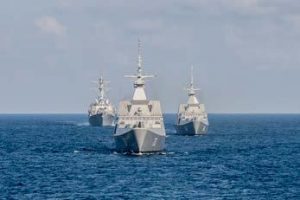 reserves of billions of barrels and trillions of cubic feet of natural gas remain to be tapped. Technological advances mean countries are able to drill for oil far from shore, making it economically crucial to control as much off-shore territory as possible. This expansion of oil exploration and drilling in the South China Sea has raised the stakes and looks likely to escalate sovereignty disputes.

This is not to mention another rivalry over territorial waters brewing between China and Japan over claims to some uninhabited islands in the East China Sea. The dispute is actually also about the natural gas resources. We indeed should be gravely concerned over the possibility of war between China on one hand, and other rival claimant states in the South and East China Seas on the other.

One Reply to “Material World: War drums in the China Sea”