‘The Covid virus has been a gift from God, began Ken Eldred. The kingdom of God advances through a series of glorious victories, cleverly disguised as disasters. In response to the coronavirus pandemic, Eldred noted, millions of Americans are turning to Christ, Walmart is selling out of Bibles, and online church broadcasts have hit record numbers’ (theintercept.com, 23 May). The Roman poet and philosopher Lucretius saw religion as a disease born of fear and as a source of untold misery to the human race. His view remains apposite some two thousand years after his death. Eldred’s god supposedly created a world where at least 40 percent of animal species are parasites, and over 99 percent of all species that ever lived are extinct. Actually, the five mass extinction events took place long before we arrived – at 23:58:43 if Earth’s history is pictured as a 24-hour clock. Capitalism is the cause of many disasters, some ongoing, and religion supports the status quo. Conspiracy theories, which have faded in and out of history since Greek and Roman antiquity, also serve to delay the establishment of a post-capitalist world. But progress is being made. ‘In the 18th and 19th centuries, around 90% of the population probably believed in some kind of conspiracy’ according to Michael Butter, professor of American Literary and Cultural History at the University of Tübingen (dw.com, 29 May).

‘The works of the roots of the vines, of the trees, must be destroyed to keep up the price, and this is the saddest, bitterest thing of all’ Steinbeck wrote in The Grapes of Wrath, his 1939 novel of the Great Depression. ‘Carloads of oranges dumped on the ground… a million people hungry, needing the fruit — and kerosene sprayed over the golden mountains.’ During the H5NI bird flu in Hong Kong in 1997, the government sought to kill 1.3 million chickens to eliminate the virus. ‘After the financial crash of 2008, hundreds of millions of dollars flowed from New York to industrial meat production in China as bankers at Goldman Sachs hunted for safe investments. Partly as a result, large-scale industrial agriculture pushed smaller Chinese producers out into dangerous terrains where their animals came into contact with bats, which carry coronaviruses’ (mronline.org, 28 May). Have you spotted the connection? A wrathful god? A cabal of Jewish bankers? Neither: it is capitalism at work. Some US farmers are once again destroying food, pouring their milk down the drain, killing their livestock and dumping their eggs. COVID-19 has disrupted capitalism’s can’t–pay,–can’t–have food supply chains. Farmers in China have been unable to sell their produce at closed wet markets or replace stocks of animal feed. And in the UK and Germany, there has been a shortage of largely immigrant workers to help with the spring harvest because of lockdown and self-isolation measures.

‘… the men upon the floor were going about their work. Neither squeals of hogs nor 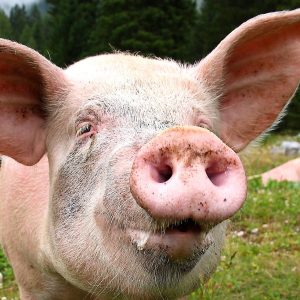 tears of visitors made any difference to them; one by one they hooked up the hogs, and one by one with a swift stroke they slit their throats. There was a long line of hogs, with squeals and lifeblood ebbing away together; until at last each started again, and vanished with a splash into a huge vat of boiling water. It was all so very businesslike that one watched it fascinated. It was porkmaking by machinery, porkmaking by applied mathematics’ (The Jungle, 1906). Little would seem to have changed since Upton Sinclair’s time: ‘Iowa’s largest pork producer, Iowa Select Farms, has been using a cruel and excruciating method to kill thousands of pigs that have become commercially worthless due to the coronavirus pandemic. As is true for so much of what the agricultural industry does, the company’s gruesome extermination of sentient animals that are emotionally complex and intelligent has been conducted entirely out of public view’ (theintercept.com, 29 May). Worth noting too: ‘A Tyson Foods pork processing plant in Iowa is shutting down after officials revealed an astonishing 22% of workers tested positive for COVID-19’ (huffingtonpost.com, 29 May).

The author of Animal Farm, George Orwell, commenting on the genesis of this work, stated: ‘Men exploit animals in much the same way as the rich exploit the proletariat.’ In the global capitalist system which robs, slaughters and degrades, socialists say: ‘Cruelty to animals will go the way of all forms of cruelty, when a real civilised existence becomes a possibility to everyone’ (Socialist Standard, February 1926).