Monaco is a strange country, a haven for the super-rich on the Côte D’Azur, where the excesses of modern capitalism mix with old hangovers from feudalism. Filmed one year BC (Before Covid-19), Inside Monaco: Playground Of The Rich (BBC2) showed us inside its casinos, government offices and black-tie events. This particular playground costs a fortune to play in – keeping out the riff-raff – and its swings and roundabouts are all gold-plated.

Being not much bigger than Hyde Park in London, Monaco is the world’s second smallest state, after the Vatican City, and the most densely populated. It’s a constitutional monarchy headed by Prince Albert II, who can see more than half the country he rules from his office window. Albert’s ancestors captured the area disguised as monks nearly 800 years ago, and he’s still defended by soldiers (the ‘Carabiniers’) today. The affable prince has allowed the cameras to follow him on his tightly-choreographed official duties and time off, joking that ‘spontaneity has to be scheduled’. We also meet others who live and work in the pocket-sized principality, such as those who clean and organise hotel rooms which cost tens of thousands of Euros a night to stay in, and staff in air traffic control and the harbour who manage the influx of wealthy visitors’ yachts and helicopters. The streets and buildings of Monaco are sleek and pristine, but soulless, like, as someone points out, a ‘luxury legoland’.

Monaco’s demographics are different to those of other countries. Monégasques, or inhabitants with citizenship, are in the minority at just over a fifth of the population, which mostly comprises European ex-pats. There are strict rules around non-natives gaining citizenship, which is granted personally by Prince Albert for those who have lived there for ten years and satisfy other criteria. Citizenship confers benefits such as subsidised rents and priority for employment over foreign nationals. Non-citizens can only last there if they’re sickeningly wealthy. So, another difference between Monaco’s population and that of other places is that as many as a third of its inhabitants are millionaires, often identifiable by their self-satisfied, surgically-enhanced smiles. Proof that wealth is strongly linked to health is shown by the country having the world’s highest life expectancy, at around 90 years. This means that many of its inhabitants are elderly, leading to efforts to court younger super-rich people. These include the social media stars invited to Monaco’s Influencer Awards, whose president is Princess Camilla of Bourbon-Two Sicilies. At the gong-giving ceremony, one ‘influencer’ is asked ‘what are you doing here?’ and quips back ‘looking fabulous’; another is wearing a t-shirt saying ‘make money not friends’.

Proportionate to the number of its inhabitants, Monaco has one of the largest police forces in the world, and they have a zero-tolerance attitude to any misdemeanour and also the right to question anyone at any time. There are strict rules and laws: Monégasques can’t use the country’s casinos and the paparazzi are banned. Even camper vans, uploading photos to social media and walking down the street barefoot are forbidden. But rather than all this stirring up concerns about living in a police state, it’s welcomed among inhabitants as it protects their wealth and privacy. If you can afford to walk along the High Street (not barefoot) wearing millions of Euros’ worth of jewellery, you want to be reassured that you won’t get either mugged or papped.

Monaco isn’t large enough to accommodate industry or agriculture, and so its economy is based on commerce, and especially gambling. In the mid-nineteenth Century, its state was in the financial doldrums until the opening of the Monte Carlo casino, which drew in punters and their money from France, where gambling was then illegal. Since then, Monaco has also hosted money-spinners like the Influencer Awards and, more traditionally, the Grand Prix car race. During this event, Prince Albert hosts a reception at the Royal Palace for 700 guests, who enjoy wine priced at thousands of Euros a bottle and dishes with ingredients including a truffle worth £35,000. There’s enough money flying around that the state doesn’t need to charge income tax, a move which has attracted more millionaires and billionaires to the principality. 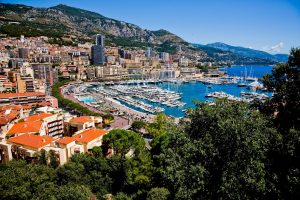 and everywhere. Despite its sovereignty and quirkiness, Monaco’s economy is tied in with that of the rest of the world, even more so than other countries’ are. Its wealth relies not on the spin of a Monte Carlo roulette wheel or spectacles like the Grand Prix and the Influencer Awards, but ultimately on countless people elsewhere, whose work produces the profits which eventually end up being bet on red or invested in a bespoke super-yacht. All countries are concentrations of capital, and Monaco is also a concentration of capitalists. The lack of common ground between their lifestyles and ours highlights the extent of the class divide.