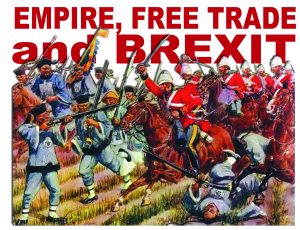 The people in the driving seat of the Brexit project love to talk about free trade, looking back to the glory days when free trade was the ideology Britain spread to the world through its empire. This doctrine was so important that the Grun’s The Timetables of History lists the British penetration into South American markets as one of its significant events in that chronology. Freed from the restrictive barriers of the EU and its protectionist ideology, so the doctrine goes, Britain will be able to spearhead its way into genuine free trade around the world, and a new golden age of prosperity will begin.

This ideology is based upon purposeful forgetting built upon purposeful forgetting. The core of the British Empire was most certainly not free trade. As William Dalrymple, in his book The Anarchy, notes, the East India Company – the core of Empire building in India – included waging war in its founding charter. Force, more than free trade, characterised the rule of the British in India. India, in its turn, was the foundation upon which the Empire was built. As per David Graber’s observation in his Debt: The First 5,000 Years, the origin of capitalism is an alliance of interests between the merchant and martial classes.

Dalrymple notes, the East India Company was a private company, and its rule in India was the rule of the bottom line. It was the corporate take-over of a subcontinent. Marx, in Volume 1 of Capital observes:

‘English East India Company, as is well known, obtained, besides the political rule in India, the exclusive monopoly of the tea-trade, as well as of the Chinese trade in general, and of the transport of goods to and from Europe. But the coasting trade of India and between the islands, as well as the internal trade of India, were the monopoly of the higher employees of the company. The monopolies of salt, opium, betel and other commodities, were inexhaustible mines of wealth. The employees themselves fixed the price and plundered at will the unhappy Hindus. The Governor-General took part in this private traffic. His favourites received contracts under conditions whereby they, cleverer than the alchemists, made gold out of nothing’.

In turn this was the basis for the primary accumulation of wealth that allowed sufficient capital to be freed up to be invested in industrial production. This is the process that the Marxist geographer and theorist David Harvey refers to as ‘accumulation through expropriation’ the emphasis is not on market exchange, but the direct forceful seizure of wealth.

This was the situation through the period of the rule of the East India Company, and after through the direct rule of the British government. Eric Hobsbawm in his Industry and Empire tells us that the doctrine of free trade never applied to India, and the planned extraction of rents and taxes formed a massive basis of the transfer of wealth from India to the British ruling elite throughout the nineteenth and into the twentieth centuries.

Included in that rent money was the opium trade, which the British peddled to their subject Indian population (in part as a form of control) and forcibly exported to China (leading eventually to wars in which Britain sought to use violence to continue selling those drugs to China). No wonder that late nineteenth and twentieth century pulp fiction was filled with the fear of the opium being forced back onto the British public.

Direct extraction was not the only role India played. According to Hobsbawm, India came to be an important market for British cotton textiles. The industrial revolution helped Britain to smash the advanced Bengali cotton industry, but British rule also helped, and the laws of commerce and trade it imposed to give itself the advantage. As Shashi Tharoor in his book Inglorious Empire notes, this also happened to India’s merchant shipping and ship building industries. Perhaps the Brexiteers are haunted by this historical spectre, and the fear that being entangled in Europe might mean that the trick might well be reciprocated upon them one day (they are fond enough of appropriating the language of decolonisation and ‘independence’ for their cause of tearing away from the EU trade club).

India was permitted some exports: human beings were exported to labour in different parts of the empire, such as building the railways in Africa, and later serving as implanted populations to play off against other communities such as in the West Indies. It also helped to export force, since India was compelled to pay the upkeep of the massive army that ensured British control, and allowed them to send forces from the Indian army overseas: particularly in World War One where India sent over a million men out to France, the Middle East and to garrison the Suez Canal, allowing Britain to check the rise of its rival Germany.

India was a far from backward or underdeveloped land when the British arrived, although it was wracked by factional wars which weakened it politically and which the East India Company exploited to gain the upper hand. The looting by the British contributed to substantial underdevelopment that it has taken a long time since independence to begin to address. Of course, pointing such things out is seen as anti-British by the forgetting machine that wants to block out the real memories of empire.

It is unlikely that this link between force and Britain’s position in the world has escaped the minds of the more serious members of the government. After all, Theresa May tried to focus on security co-operation as a bargaining chip in her dealings with the EU, a sign that people at the heart of government were aware of this. Britain remains a significant military power, but it is unlikely to be able to repeat the conquest of the world by military means, at best it will only be able to exploit its position in worldwide organisations and as an ally of the United States to try and draw off a share of profits and exported ill-gotten gains of despots the world. From the pirate island of empire to being a well-armed tax haven is not an inconceivable trajectory.

The most significant take away is that free trade has never been the reality of Britain’s rise to power in the world, and as its formerly colonial possessions assert their strengths on the world market, short of resorting to insane warfare, British capital can only look forward to a subordinate position in the world league tables. Those other capitalists will have learned the lesson of Britain’s former success, and will use all their might to bend the rules to their advantage. Trade is inextricably tied up with the state and power.