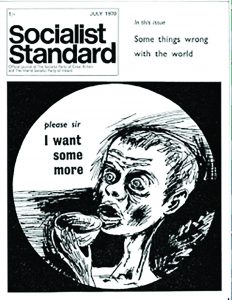 Socialism — International Socialism or the Socialist Party of Great Britain?” held in the Freegardeners Hall, Edinburgh, on before an audience of 70. (The local IS branch have seen this report and raised no objections to it) (…)

S. Jeffries opened for the IS by saying that he agreed with the SPGB’s Marxist theory but that there was a failure to link up theory with practice. He went on to quote Engels on the need to build the revolutionary movement within the trade unions. It was stupid to rely on the vote. He preferred the overthrow of the system by non-parliamentary means, and said that Marxists should always be prepared for the revolutionary situation when this overthrow would be possible.

Comrade Vanni replied that revolutionary phrase-mongering did not make a socialist and invited the floor to look at the dismal history of the IS. Using back numbers of the Labour Worker (now Socialist Worker) he drew attention to their lack of socialist understanding giving instances such as IS having urged workers to vote for the Labour Party in the 1964 and 1966 elections instead of fighting the real enemy — capitalism. It was not a Leninist elite that would bring about the revolution but capitalism itself by the contradictions inherent in it. IS far from being a vanguard, were in reality politically backward. They considered the workers too dull to learn from history but instead that they had to be taken through the struggles and learn from strikes. He went into some detail on the bankruptcy of their political theory, such as the permanent arms economy and their belief in the collapse of capitalism. IS did not even understand what Socailism was, as they saw a need for money, banks and the like, saying that instead of being sacked by a boss you would be made redundent by a ‘Workers Council’. In reality it all boiled down to a sophisticated state capitalism.