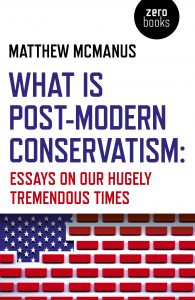 This is probably not a question most people have asked, and in any case it is not clear that the answers given here will be all that satisfying. The book consists of a large number of shortish pieces, mostly written by the editor but some written or co-written by others, so it is rather repetitive and there is little sense of a sustained argument being built up.

McManus describes post-modernism as an epoch in human history, a culture defined by globalisation and massive technological changes. Traditional conservatism is mutating into post-modern conservatism, exemplified by such as Trump and Farage. It is ‘ascendant across the Anglo-Saxon world’ and is supposedly characterised by a number of features, including: indifference to the distinction between truth and falsehood, affiliation with a powerful identity seen as under attack, use of modern media, and cracking down on other identity groups when in power. ‘Postmodern conservatives largely come from the most privileged groups in history’, it is stated, but this appears to mean white people in Western countries, not the truly privileged, the one percent, the capitalist class. At one point, post-modern conservatism is equated with right-wing populism, but this is not argued properly, nor is there any discussion of populist ideas in general. No suggestion is made that post-modern conservatism claims to be opposed to an elite, which is usually seen as a main tenet of populism.

The last section of the book is a criticism of the ideas of Jordan Peterson, such as his views on ‘post-modern neo-Marxism’, which illustrates the kind of jargon found not just in these pages but in many of the writers discussed here. One good point is made: that Lenin and Mao launched their revolutions in poor developing countries, in contrast to Marx’s view that communism required the means of production to be highly advanced. The final article, by Borna Radnik, refers to the abolition of private property but notes that the Left have failed to propose an alternative to capitalism. To which we can only say, never mind the Left, look at the publications of the World Socialist Movement.

And as for what is meant by the hugely tremendous times mentioned in the subtitle, the book is silent. 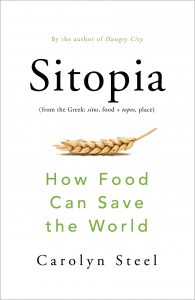 Carolyn Steel. Sitopia. How Food Can Save the World. Chatto and Windus. 2020

In 2008 Carolyn Steel published Hungry City, a book that explored how, since early times, people in cities found food for themselves, what that food was and how it influenced their history and development. Now the same author has written another substantial and more ‘political’ volume, in which she ranges expertly across both both time and geography to trace the history of food, its consumption and its intersection with the concept of nature of work. Sitopia. How Food Can Save the World draws upon wide-ranging and well-integrated research to show the history of homo sapiens as largely one of group cooperation and human beings as natural collaborators and ‘infinitely inventive and adaptable’. Her clearly expressed desire is to see a world in which adequate resources for a decent life can be available to all.

This is something she sees as eminently possible, pointing out that enough food is already produced to feed everyone on the planet, since ‘farmers worldwide currently provide the daily equivalent of 2,800 calories of food per person – more than enough to go round, given an ideal food system’. She also refers to Tristram Stuart’s book, Waste, published in 2009, which illustrates ways in which one third of the global food supply could be saved, enough to feed the world’s hungry 23 times over. However, the reservation implicit in her ‘given an ideal food system’ is made clear when she shows how far from ideal the system of food production is in modern-day society. She explains how, in its drive to produce and sell food at a profit and its compulsion to grow and continually expand, capitalism’s combination of industrial agriculture and market forces, while making food as cheap as possible through the need of producers to compete, fails to take into account the wider costs, for example to the environment and to human health. She sees food production as an integral part of the scenario whereby the whole future of humanity is threatened by ecological destruction, climate crisis and increasing obesity. But at the same time food for the author is a potentially important means to remedy the situation. She says: ‘If we are to free ourselves from money’s grasp, we need a way of thinking that transcends it: an economy based on values grounded in reality. Food can give us this.’ That, in her view, is the case because food is, as she puts it, ‘by far the most powerful medium available to us for thinking and acting together to change the world for the better’. She goes on to say: ‘Descartes might just as well have said: “ ‘I eat therefore I am”.’

So, while recognising that existing resources are not in themselves a limiting factor to a better life for everyone, she also sees it as vital to ensure that ecological considerations and environmental balance are in the forefront of any such project. As she puts it: ‘We already know how to feed the world, warm our houses and cure disease; what we lack is the capacity to put our ideas into effective practice.’ She goes on: If our goal is to create a world in which everyone can flourish, then our common task must be to plan what form such growth would take.’ She then reveals that she has a plan (‘Plan B’, as she calls it), the centrepiece of which is non-industrially, cooperatively, locally produced food: ‘local sustainable production, ecologically produced organic food in which the market would favour foods that nurtured nature, animals and people’. In this context she mentions, for example, organic box schemes, community kitchens and gardens, forest gardens, microbreweries and bakeries, food co-ops and community supported permaculture.

Steel sees the spread of such activities as a response to what she calls ‘the blandness and destructiveness of industrial food’ and goes on: ‘It is also symptomatic of something far deeper … Food is something we can make, that brings us together and grounds us …Food, in short, is something through which we can root ourselves in the world, both socially and physically.’ She continues: ‘Since food affects virtually every aspect of our lives, adopting such an economy would have an immediate, even revolutionary effect. By changing the ways in which we produce, transport, trade, cook, share and value our food, we could transform our landscapes, cities, homes, workplaces, social lives and ecological footprint. She argues that society should aim for a low or zero-carbon steady-state organic system of production of food and other goods and is especially concerned by the loss of biodiversity caused by capitalism, seeing it as an even greater threat to life on earth than climate change. As she puts it, ‘everything in nature is connected’ (quoting Darwin’s insight), and ‘in order to live, we must manipulate nature, yet must seek to do so without diminishing it’. She is hopeful of progress too, comparing the new food movement to ‘a deep ocean current: invisible on the surface, yet steadily gathering pace and strength to the point where it can effect real change’.

For the change in society which would bring this about, her political prescription is an avowedly anarchist one. She declares support for what she sees as the vision of anarchist thinkers Proudhon and Kropotkin, a vision characterised as ‘small groups of territorial collaborators without formal leaders, a society whose very existence depends on common ownership’. However, to achieve it, she sees the need for ‘a social vision that transcends the fatal duality of neoliberalism and totalitarianism, one capable of engaging with and connecting with us at every scale from local to global’, since ‘anarchism’s core message, that we should embrace democracy while sharing our goods more in common could not be more apposite’, and, ‘by accepting our duty as political animals … we can become more effective, empathetic, fulfilled social beings’.

Despite the author mistakenly equating Marxian socialism (or communism) with the authoritarian state capitalism of countries like Russia and China, there is a lot in her book that socialists can agree with. Examples of this are her trenchant critique of capitalism and its contradictions, her insistence that humans are a collaborative species, her liking for ‘common ownership’ and her desire for a society of ‘empathy, equality and ecological longevity’.

It is only a pity that she doesn’t quite go far enough and, despite recognising and condemning the iniquitous and socially divisive effects of money and the market (‘for most of human history money didn’t exist … humanity had social bonds instead’), she allows her imagination to be limited by the idea that money and the market are nevertheless somehow inevitable, at least on some level, and bases her project on the hope that that they can somehow be made to work against their inbuilt nature, i.e benignly and cooperatively. We would obviously disagree that this was possible. Only in the kind of moneyless, marketless society of free access and voluntary cooperation advocated by socialists can food production, and indeed all other production, take place in a truly cooperative, balanced and human-centred way. Only in that kind of social context will it be possible, as the author puts it eloquently as ever, ‘to reimagine the landscape as a canvas for human flourishing’.

The Socialist Party’s 2020 Summer School looks at technological progress and its application in the past, present and future. This weekend
of talks and discussion is an exciting opportunity to share and explore revolutionary ideas with others, through the SPGB’s Discord server.

From the development of the first tools and the wheel through to the invention of the printing press, the steam engine, the microprocessor and beyond, technology has always shaped how we live.

Scientific developments take place in the context of the social and economic conditions of the time. In capitalism, technological progress and how technology is used are driven by what is profitable and cost effective more than by what is really needed and wanted.

This means that technology is often used in ways which go against our best interests, whether through environmental damage, the development of ever-more destructive weapons or the misuse of data gathered online and through social media.

In a future socialist society based on common ownership and democratic organisation of industries and services, technology could really be used to benefit us, in harmony with the environment.

To join in or for further information, e-mail spgbschool@yahoo.co.uk. Details of sessions will be announced soon.