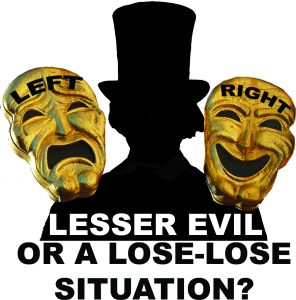 On the face of it, the lesser evil argument seems only common sense. If you have a choice between something bad and something worse, who would choose the worse? In fact, in everyday life, who does?

In politics it is rather more complicated as there are not just two options since, even if there are only two candidates, you can always choose not to vote for either of them by not voting at all. And there is not always agreement either on what is ‘evil’ or on what is ‘lesser’.

In Britain at election time we socialists come up against this argument from those who want us to vote Labour on the grounds that it is the lesser evil compared to the Tories. But it is not just socialists who are confronted with the lesser-evil argument. For instance, in Northern Ireland if you are a Unionist living in a predominately Irish Nationalist area you may find yourself in a situation where only Sinn Fein or a moderate Nationalist has a realistic chance of being elected; in that case you might be open to persuasion to vote for the moderate Nationalist. On the other hand, you might consider a united Ireland so ‘evil’ that you wouldn’t vote for either of them.

Socialists feel the same when confronted with a choice of two (or more) candidates standing for capitalism. For us, capitalism is the ‘evil’, which is why it is a matter of indifference to us which particular party forms the government under it. This is based on the nature and lived experience of governments under capitalism. On paper the programme of the Labour Party seems more attractive – offering more reforms to benefit working people – than the Tories. However, as everyone knows, what a party does when in office is not the same as what it says it will do.

There is a reason for this. Any party that takes on the job of being a government under capitalism in the end has no choice but to bend to the economic laws of capitalism and give priority to profits and conditions that facilitate profit-making. Thus we have seen Labour governments cut benefits, impose wage restraint, oppose strikes, bring in racist immigration controls, prepare for wars, etc, just as Tory governments have. This makes choosing between them irrelevant. Changing governments changes nothing; capitalism continues and it is capitalism that is the problem.

In the US, as it’s a presidential election year there, whether or not to vote for a perceived lesser evil is a big issue. A veteran leftist, Mitch Abidor, in an article in the New York Times (13 May) subtitled ‘Many disappointed fans of Bernie Sanders would prefer a quixotic display of principle’, urged them not to make the same mistake his generation of leftists made in 1968. Then they voted for third-party candidates rather than for Hubert Humphrey the Democratic Party candidate, so helping Nixon to win (though actually Nixon would have won anyway). He summarises their argument as:

‘The two major parties are merely the right and left wings of the capitalist system. Six of one, half a dozen of the other.’

This is true and a view we can endorse. Note, however, that those Abidor was criticising are planning to vote for the Green Party candidate, Howie Hawkins, as opposed to not voting for any candidate who stands for capitalism (after all, they were planning to vote for Sanders and his programme of more state intervention in the capitalist economy), as does the Green Party, even if it wants to go back to an idealised smaller-scale capitalism.

As a sexist, racist, xenophobic loudmouth Trump is the perfect bogeyman, the ideal ‘greater evil’. Who wouldn’t want to vote him out? Quite a few actually. Ok, how could any ‘progressive’ not want to vote him out? Yes, but who are they going to vote in instead? The Democratic Party is indeed ‘the left wing of the capitalist system’. If he wins, Biden would be presiding over the affairs of the US capitalist class and, in accordance with the past policy and record of Democratic presidents, would defend its interests abroad. The form might change (he might be more polite) but the content (defence of US interests throughout the world) would continue. It really would be half a dozen of the other.

In Britain, over time fewer and fewer people are being convinced by the lesser-evil argument and at election time are refusing to choose between Labour and the Tories as the only two parties with a realistic chance of forming a government. They vote instead for the party that best expresses what they do want. In this, they follow the advice of Eugene Debs, a leader of the pre-WW1 reformist Socialist Party of America:

We agree with that too but there is another reason why we in particular refuse to vote for any candidate or party that stands for capitalism or wants to try to reform it. The capitalist class are the ruling class – the class that controls political power – because the excluded wage-working majority class acquiesce in this by, among other things, voting for politicians and political parties who accept the capitalist economic system and the right of the capitalist class to live off incomes ultimately derived from the exploitation of the majority class.

From this perspective, voting in an election where all the candidates stand for capitalism is a lose-lose situation. There is no lesser evil.

One Reply to “Lesser evil or lose-lose situation?”