From Lockdown to Basic Income?

The acolytes of the fashionable radical idea of Universal Basic Income (UBI) must have been overjoyed by two recent news items. Apparently, the Pope has endorsed the idea. According to the Irish Times (13 April), ‘In a letter addressed to popular movements around the world, he expressed solidarity with their aim of bringing change to global systems and structures that exclude the majority’.

They report him as saying in the letter: 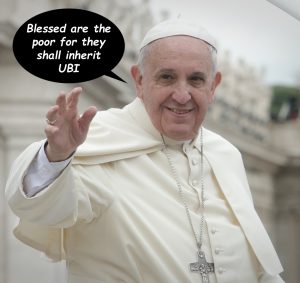 workers, seamstresses, the different kinds of caregivers: you who are informal, working on your own or in the grassroots economy, you have no steady income to get you through this hard time… and the lockdowns are becoming unbearable. This may be the time to consider a universal basic wage which would acknowledge and dignify the noble, essential tasks you carry out’.

This news was coupled with reports that the Spanish left-wing government has announced that it intends to become the first European country to implement UBI:

‘Minister for Economic Affairs Nadia Calvino said that UBI would be introduced “as soon as possible” and could be something that “stays forever, becomes a structural instrument, a permanent instrument”’ (tinyurl.com/y9mzculd).

Although, as advocates of UBI noted, ‘the payments will be targeted to families and will differentiate based on their “circumstances.” In practice, differentiating based on circumstances will result in means tests that fall on the poor’.

If it is targeted at families, not individuals, and is based on assessment, it would more closely resemble a Beveridge-style welfare state, than the full-fat version of UBI, something referred to as a Contingent Basic Income.

The idea behind UBI is that every individual in a country is guaranteed a certain amount of income. In its most basic form, the state would simply send a payment to each person (much as the United States has done as part of its response to Covid-19 related unemployment). This sum is irrespective of employment or personal status. Fundamentally, it breaks the link between the sale of labour power and the ability to access necessary resources. It is simultaneously egalitarian and libertarian, since it avoids the need for state bureaucracy to carry out cheeseparing assessments and domination over individuals lives.

It also has the benefit of being easy to imagine, since it has the simple form of keeping commodity relations intact: it keeps the market in place. That is its chief problem: it tries to address the problems caused by a system that defines people by their property through giving them all property. Although it will give people money, those who own other types of property, such as houses, would be able to benefit from rents and market demand for goods they hold.

Employers would be able eventually to lower wages, relying on the UBI subsidy to count towards their employee’s cost of living. In those terms, it would be a substantial transfer of wealth from firms that don’t need much labour to labour intensive industries (in particular, as many people focus on, the so-called gig economy of the likes of Uber).

We described this as the ‘redistribution of poverty’ in our classic pamphlet on the Beveridge Plan . That criticism stands true for UBI.

By concentrating on the surface phenomena of money and commodities, UBI ignores the social relationship behind in the form of value production. This comes to the fore when people start whining about ‘the incentive to work’ and the need to keep UBI so low that the lash of poverty can still be applied (surely if we were talking about incentive, doubling your income should be enough? That people might be assumed to prefer to not work and live on a basic income demonstrates the flaw in acquisitive notions of human behaviour).

People will need to work to make the taxes to pay for the UBI. Society and the employers would then be locked in a struggle over the share of wealth going to labour and the share going to profits. The only difference would be that the state would become a key battle ground instead of the labour market directly.

Likewise, the ideology of people getting something for nothing can cause resentment. We can see this sort of thing when Tories call for unruly families to be thrown out of council housing, as if it were a grace and favour home, rather than a right to housing. If UBI is seen as a gift, with obligation (as per the Contingent Basic Income idea), then it would not be supported by many of the population. Hence, also, why Donald Trump wanted to have his name on all the cheques sent out to Americans to cover loss of income due to Covid-19, he wants them to see the money as a gift from him.

Since some will be net contributors to the UBI, they will not perceive this as a benefit to all but a cross-subsidy, a gift they make to others, with corresponding obligation.

Although the reality is that the burden of taxation comes from profits, the structure of income tax nominally coming from employees creates an ideological value that deceives them into thinking they are paying for the government and therefore have a stake in it. In this case people would believe they were paying the income for those who earn less than them.

Some, such as David Harvey, propose Universal Basic Services instead of UBI. This would be things like the NHS, free at the point of use. This has the benefit of removing the commodity character of the service, and would represent an improvement (though likely, in a capitalist world, to still be wrapped up in the struggles between classes over spending levels and coated in bureaucracy to control those costs). But if we had the political strength to impose substantial gains through UBS, we’d have the strength to abolish capitalism outright.

The post-Covid situation will be that millions will be out of work, and capital may not be readily available to provide new employment, as many firms go bust. Governments will have to find ways to keep social peace. They will take radical steps, throwing much market ideology to the wind, but they will be doing that to maintain the advantage of the owning class and rejuvenate market society, as they did after the 2008 crash.