Keir Starmer has been elected the leader of the Labour Party with 56.2 percent of 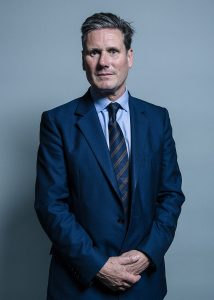 the vote. His background is a legal one. He became a barrister in 1987, only being elected MP in 2015, following Frank Dobson’s resignation, in Holborn & St. Pancras, a Labour safe seat. He was knighted too, in 2014 (though he still prefers not to go by ‘Sir’). While Starmer is no centrist, he will, according to the BBC, attempt to ‘unite supporters of both Jeremy Corbyn and Tony Blair within the party’. He still describes himself as a socialist, which of course, just means nationalising a few industries and regulation on portions of the private sector. That being said, this is still noteworthy, as the Blairite faction of the Labour Party sees Starmer’s victory as a victory for them despite this. Rebecca Long-Bailey, the left-wing (or as some have put it, Corbyn-continuity) candidate, won only 27.6 percent of the vote – not even half of Starmer’s.

As some see it, this marks the end of Corbynism and the left-wing policies that the Labour Party has advocated in the last few years. While Jeremy Corbyn’s positions were nowhere near as radical as the press made them out to be, Keir Starmer’s policies will then be a significant shift back to the centre. Starmer has been described by an aide to Corbyn as ‘actually [having] zero politics, which often means he follows the crowd’ (FT, 22 February). Of course, the business class are significantly happier with this: Henry Mance writing for the Financial Times (3 April), a newspaper which, unlike the mainstream press, acknowledges class war, expresses their reaction to Corbyn: ‘It’s been a surreal time. The threat came out of nowhere. It quickly torpedoed things that we once took for granted. But rest assured, it will end. On Saturday, Jeremy Corbyn’s tenure as leader of Britain’s Labour party finally expires. It’s been five years’.

Starmer’s shadow cabinet reflects the shift quite dramatically. Anneliese Dodds, the Shadow Chancellor is no longer interested in ‘overthrowing capitalism’, as her predecessor John McDonnell was (whether his policies would have contributed that overthrow is a separate question altogether), but more Keynesian policies. Ed Miliband, an advocate of ‘responsible capitalism’, returns to the front bench, this time to a position as Shadow Secretary for Business, Energy, and Industrial Strategy

The spectrum of debate will narrow more, then. Socialism, a word that has had all meaning already evicted, is now thrown about with reference to centre-left policies. One of Jeremy Corbyn’s successes (or failures, if you’re so inclined) in the Labour Party was engaging more extensively with grassroots movements. This at least helped to destigmatise real socialist politics and connect socialism to working class movements and democracy, rather than simply being a synonym for autocratic state-control. What might happen now is that even Corbyn’s trade-unionism and idle class-war rhetoric can be pushed out as ‘going too far’. Socialism à la Starmer doesn’t even touch on the important talking points – it simply means having a strong public sector. Perhaps on that basis the East India Company, nationalised in 1858, would be an example of socialist enterprise.

Keir Starmer’s tenure as leader of the opposition will be many things, but controversial is not one. The faux radicalism is evident. Starmer is keeping some of the policies from the Corbyn-era, including nationalisation of rail, a Green New Deal, scrapping Universal Credit, and so on. However, his support for the EU is notable as a shift back to more neoliberal-friendly politics. The notion of the Labour Party as a ‘people-powered movement’ will be weakened if not eliminated entirely. Momentum, a pro-Corbyn grassroots pressure group, will almost certainly be further derided as radicals trying to cling onto the sinking ship of left-wing politics. The most telling thing is how the business press are no longer afraid. Starmer’s policies will not get in the way of the private sector, or certainly not as much as Corbyn’s policies did.

There isn’t going to be a threat to the business elite from within the Labour Party, it seems. At every opportunity, the party turns on radicals and the left and quells talk of genuine democratic change. With any luck, disillusionment with the establishment will be heightened rather than workers being lulled into passivity. If genuine change is going to happen, it won’t come through an establishment tool like the Labour Party. With the current coronavirus crisis, whispers of a different social order become louder. It is clear that Keir Starmer isn’t offering much in that respect.