‘Get used to more state intervention, it looks like it’s here to stay’ read the headline of an article in the Times (25 March) by its Deputy Business Editor, Graham Ruddick.

A swing back towards state intervention was beginning to become evident even before the coronavirus crisis led to the massive state intervention in the economy that it has (even more than the Labour Party used to advocate under Corbyn). Before this, failed Tory politician Sir Iain Duncan Smith had told the BBC that ‘you need a dose of Keynesianism to restore monetarism’ (Guardian, 16 February). Ruddick quoted Patrick Minford, who he described as ‘one of the Iron Lady’s favourite economists’ as telling the Financial Times that ‘fiscal policy was now needed to boost the economy because monetary policy has run out of road.’ The final nail in the coffin of Thatcher’s economic policy was hammered in by Boris Johnson when he declared in a video message, no doubt deliberately to distance himself from her opposite view, ‘that there really is such a thing as society’ (Guardian, 29 March).

‘Laissez-faire’ originated as a demand by capitalist entrepreneurs in eighteenth-century France that the state, then controlled by a landed aristocracy, should leave them alone to pursue their profit-seeking economic activity. Adam Smith took this up and it became the demand of factory-owners in Britain too, backed up by a whole school of ‘political economists’. Their theory, that the best economic system was one where the state let capitalist enterprises get on with making profits in response to spontaneous markets forces, came to be known as ‘economic liberalism’.

Economic liberalism was the dominant economic policy, backed by academic theory, pursued in openly capitalist states up until the Crash of 1929 and the slump that followed. After the end of WW2, during which the state played a leading role in organising economic activity, state intervention was continued, justified by Keynes’s new theory that it was needed to manage the capitalist economy so as to arrange for steady economic growth uninterrupted by slumps such as that of the 1930s. This appeared to work but when the real test came, with the end of the post-war boom in the 1970s, it failed; increased state spending did not stimulate an economic recovery but merely resulted in stagflation (stagnation plus inflation).

Capitalist enterprises demanded, rather, that the state reduce taxes on them so that they could keep more of their reduced profits. States cut back their spending and a new theory was thought up to justify this. Called ‘monetarism’, it argued that, as long as the government controlled the (somewhat vaguely defined) ‘money supply’, left to themselves market forces would bring about steady, inflation-free economic growth. Its opponents saw this as a return to pre-Keynesian economic policy, which to a certain extent it was, and dubbed it ‘neo-liberalism’. It, too, appeared to work for a while but then came the crash of 2008 and the slump that followed.

Will a move away from the policy of ‘neo-liberalism’ improve things? In a word, no. Increased state intervention didn’t work last time and won’t work this time either. What is needed is not policy change, but system change. 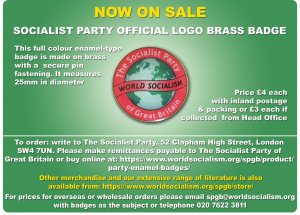