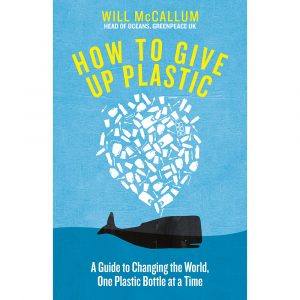 because they feel that working for socialism requires a lot of time and effort, with no guarantee of success. Much better, they may say, to work for short-term gains that need less commitment and are more likely to be achieved.

I was recently reading Will McCallum’s book How to Give Up Plastic. This gives a detailed account of the problems caused by various forms of plastic, from bags and bottles to straws, nappies and takeaway coffee cups. Many of these are used just the once and then disposed of, eventually leading to the clogging up of rivers, beaches and oceans. Samples taken from the deepest place on earth, the Mariana Trench in the western Pacific, contain microplastics.

McCallum makes many recommendations for how people can massively reduce their use of plastics, such as having reusable water bottles and coffee cups. But aside from what people can do at an individual level, often without too much trouble, he gives examples of larger campaigns. Clearing litter from a park or beach requires a lot of work and preparation, from publicising the event to bringing bin bags and weighing what has been collected. He also posits a ladder of escalating approaches: writing letters, holding a meeting, writing an article for the media, organising a petition, and finally having a protest (which may just mean leaving unnecessary packaging at the till in a supermarket, rather than staging a demo).

What a lot of effort! And campaigns like this will always come up against the simple fact that capitalism is basically about profit, not about reducing pollution and conserving the oceans. Consumer pressure can bring about changes in the ways in which companies source, produce and package commodities, and there is nothing wrong with having a reusable coffee cup, but when seen against the background of all the ecological damage done by capitalism, this really is, well, a drop in the ocean. All the time and ingenuity that is spent on such campaigning would be far better put to the task of making socialists and bringing about a society based on meeting human need, which would include environmental considerations being made a priority.