Book Reviews: ‘The Dilemmas of Lenin’, & ”The Corruption of Capitalism – Why Renters Thrive and Work Does Not Pay’

The Dogma of Lenin

Opening this book, you might expect to find a Lenin who is an open-minded, flexible, freethinker. This was not the case – and anyone who has ever met a Leninist will tell you a better title would have been ‘The Dogma of Lenin’.

In the field of so-called ‘Lenin studies’ (Lih, etc) nuanced critique is supposed to have replaced the ‘Great Man of History’ approach. So Ali writes ‘this book was written to put Lenin in his proper historical context … Lenin was a product of Russian history and the European labour movement.’ And that Lenin would have died in exile without the First World War and the events of February 1917. However, by p.2, comes something of a reversal, and a flavour of the rest of the book ‘First things first, without Lenin there would have been no socialist revolution in 1917. Of this much we can be certain.’

Worse still, it suffers from a teleological interpretation, for example; asserting ‘this [lack of revolution] is where the Bolsheviks as a party were headed strategically and tactically before April 1917.’ And ‘Lenin understood that if the moment were not seized reaction would triumph once again’.

And of Bolshevik slogans ‘Land, Peace and Bread’ Ali makes the unlikely claim that ‘behind each word lay a set of ideas encompassing Bolshevik ideology.’ Later he states ‘Bolshevik slogans were not particularly if at all socialist.’

Also strange is that Ali claims that Lenin’s rage (at Kamenev and Zinoviev exposing his date for insurrection), was both understandable but in the end didn’t matter at all. Lenin’s peace deal with Germany was ‘shameful’ but also ‘necessary’ (and ‘compromise’ is a word reserved for opponents). ‘War communism had been necessary to win the civil war’ but in the absence of a German revolution the ‘New Economic Policy’ was then necessary (and later ‘there was no credible alternative’). With no hint of irony is written ‘contempt for political chameleons stayed with Lenin all his life’.

Later chapters include one, ostensibly on the contribution of women to the revolution, but seemingly devoted to the women in Lenin’s life. Lots of criticism is expressed for 11,000 American troops Woodrow Wilson sent to invade Russia during the Civil War, but very little by comparison for 1.4 million German troops Kaiser Wilhelm II sent Eastwards during the First World War. This can only be explained as anti-Americanism, later confirmed in a dig at American academics.

As the final chapter, the Bolshevik-Menshevik split (following whole sections on ‘dilemmas’ of ‘Terrorism and Utopia’, ‘Internationalism, Socialism, Empires and War’) is wholly inappropriate. Both chronologically and in terms of significance of ‘dilemmas’ it should have come first.

The epilogue is worse than the rest of the book, reprinting an autobiographical Lenin analogy on climbing a high mountain. This is really a ‘great man’ approach to looking at Lenin, and one we would reject.

‘The Corruption of Capitalism: Why Renters Thrive and Work Does Not Pay’. By Guy Standing. (Biteback £9.99) 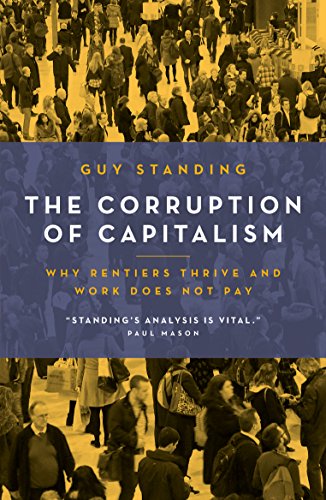 There is a lot of useful information here, on the ways in which present-day capitalism does not run on the basis of a ‘free market’. For one thing, there are massive subsidies to companies, such as the £21m recently given by the government to Toyota to help it modernise one of its UK car plants. The World Bank loaned $900m to Lidl to help it expand in Eastern Europe. Farming subsidies in both the UK and US go overwhelmingly to a small number of very rich farmers, and the fossil fuel industry has received enormous subsidies to enable it to keep down prices to consumers.

The tremendous rise in the number of patents issued has led to ‘intellectual property’ becoming a prime source of income for a powerful few, just like copyright rules. Debt, including for housing or student loans, has become big business and, again, a major source of income. The enclosure of the ‘commons’ has proceeded apace: this covers everything from shrinking numbers of allotments and public parks to the closing of libraries and museums.

Standing sees all this as not just part and parcel of capitalism but as indicative of the rise of a new variety, rentier capitalism. A rentier, he says, ‘is someone who gains income from possession of assets, rather than from labour’, while a rentier corporation ‘is a firm that gains much of its revenue from rental income rather than from production of goods and services, notably from financial assets or intellectual property’. In the US between 1980 and 2000, the share of income going to profits in non-financial sectors fell, while rentiers flourished. Eighty years ago, Keynes referred to the forthcoming ‘euthanasia of the rentier’, but this has emphatically not happened.

Furthermore, a new class structure has arisen, including a plutocracy and elite, a salariat in relatively secure jobs, freelance professionals, a core working class and a precariat, who are mostly working as taskers in the gig economy. There is no united working class, Standing claims, and any movement against rentier capitalism must be led by the precariat. He states that Corbyn’s victory in the Labour leadership election was based largely on his appeal to the precariat, though no evidence for this is offered.

His proposal for what should be done involves ending much of the special features of rentier capitalism, such as subsidies and tax breaks for the rentiers. The labour market should be made into a free market, with employers and workers having roughly equal bargaining positions (which is a real pipe-dream). He is associated with the Basic Income Earth Network (basicincome.org), and suggests paying a ‘modest monthly sum’ to everyone.

But all this really would leave the real class nature of capitalism unchallenged. There is very little here about non-financial capitalists who, after all, also derive their income from ownership of assets rather than their own work. The companies they control provide goods and services, but the wealth of their owners is still based on profits and exploitation.

One last point: it is an old observation that at least the capitalists cannot charge us for the air we breathe. According to one passage here, however, this appears no longer to be the case: the air in parts of China is so polluted that a Canadian company is selling bottled mountain air from the Rockies to Chinese city-dwellers at $10 a bottle.