Mosul: the Horrors of War 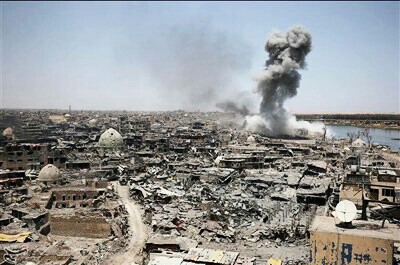 In mid-July Mosul finally fell. After over a thousand days into the campaign against Islamic State, and after an urban battle that has lasted three months longer than the Battle of Stalingrad, the last stronghold of IS in Iraq was taken.

This was at enormous cost, Towards the end of the battle, reliable reports came in of over 100 children dying of starvation. Untold numbers of dead remain buried in the rubble of Mosul, one estimate is up to four thousand. As Airwars, an organisation tracking the effects of the wars in Iraq and Syria report:

‘Thousands of Moslawis have credibly been reported killed since October 2016, with West Mosul in particular devastated. The Coalition alone says it fired 29,000 munitions into the city during the assault. Five times more civilians were reported killed in west Mosul versus the east of the city, Airwars tracking suggests – an indication of the ferocity of recent fighting’ (airways.org).

Western Mosul has been destroyed. The numbers are prodigious: 3,000 IS fighters took on an army of over 150,000, including the elite of Iraq’s special forces. Paul Rogers, Professor of Peace Studies at Bradford University, wrote on The Conversation website:

‘…the elite Iraqi Counter Terror Service (or Golden Division) had sustained serious casualties and there were already fears that Mosul would turn out to be a pyrrhic victory, reducing the one force that the Iraqi government could depend on in any future civil war to a shadow of its former self” (theconversation.com.uk).

The final death toll among civilians will be hard to establish, but there are credible reports of around eight thousand deaths: caught in a combination of Coalition bombing, artillery and IS murdering those who tried to escape. The IS troops deliberately kept the civilian population hostage to hamper the Iraqi government forces and their allies. Even still, over 700,000 people have been displaced by the battle of Mosul, and most will have no home to return to.

The devastation caused by a tiny handful of fighters is a testament to the dangers and horrors of modern warfare. It raises the question of the longer term in Iraq. Even when east Mosul was cleared, reports came in of stay-behind cells carrying out attacks on the rear of the Iraqi forces: and it’s still not clear if the fall of the West of Mosul means the end of most of the IS fighters there, or if they have scattered, to carry on an irregular campaign. The denuding of the Iraqi special forces, and their reliance on Iran-backed Shia militias (much to the resentment of the mainly Sunni citizens of Mosul and its surrounds) means that anything approximating peace may well be a long way off.

A significant feature of this campaign has been the distortions of propaganda. The campaign in Mosul was almost identical to that waged by Bashar Al-Assad and his Russian ally in Aleppo: but the coverage was vastly different. Aleppo was subject to daily reports of every bombing and allegations of continual brutality. Mosul only really entered the UK news as a footnote, or to mark a significant victory.

Given the undoubted brutality of IS, it would not have been difficult to try and justify the civilian deaths along the way: but silence was the main media response. Part of the difference is that BBC journalists were embedded with Iraqi forces, and so were showing their side of the story whenever they reported. Though the same sources of information on deaths in Mosul were available as were to be found in Aleppo, even massacres by IS did not make the mainstream news. The conclusion could be that it is thought that the public might not stomach the cost of pacifying Mosul (it’s worth noting in passing, that Fallujah has been similarly pacified three times, so even this phase of the story may not be the complete end). Another possibility is that the toll of civilian casualties is unpopular in the Arab world. Juan Cole on his blog notes that Sunni news sources have been focussing on civilian casualties (www.juancole.com/2017/07/declares-triumph-casualties.html).

There can be no doubt that IS were a particularly brutal and barbaric gang. As we have noted in these pages, the core of their structure was made up of experienced military officers, a fact which accounts for the difficulty in dislodging them from Mosul. These were not rag-tag amateurs, but schooled military professionals. Their slaughter of civilians was the cold ruthless logic of war. Their rule was equally as brutal as it was weak.

There are equally savage regimes in the region: Saudi Arabia, for example, is engaged in a prolonged war with rebels in Yemen that is seeing misery piled upon misery, and not content with that, it has been laying siege to Qatar, for no other reason than regional rivalry. Its domestic record is also infamous. We are unlikely to see MPs in Parliament lining up to demand air-strikes on Saudi.

The reality is that the horrors of modern war are not to be laid on the shoulders of a religion nor an ideology, nor even on specific individuals. Fault and justification for destroying an entire city can always be found when military, political and economic needs demand it. IS tried to join the worldwide gang of killers that get their power from the barrel of a gun (and the guidance system of a missile).

The fact that the invasion of Iraq has led to city after city being crushed in prolonged urban warfare, shows the limits of the usefulness of warfare in achieving any political ends. The means of violence are abundant, cheap and easy to obtain, tiny groups can wield vast devastation, when they achieve the right levels of motivation. IS will continue to strike: its fighters have gained skills and attitudes that will see them spread across conflict zones the world over. Whether IS had any material link to recent attacks in Britain, they have shown a willingness to use terror for their propaganda purposes.