Corbyn: What He Did Achieve and What He Could Not Have 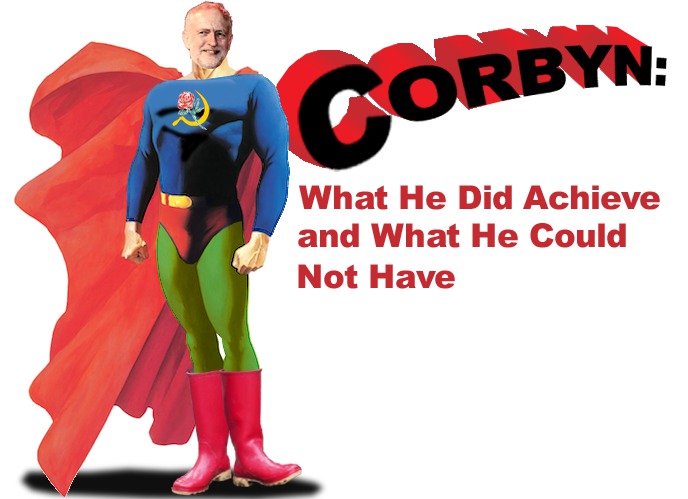 Jeremy Corbyn has shown one thing – that contesting an election on a manifesto promising to tax corporations and the rich to pay for improvements in health, housing and education for ‘the many’ is not the vote-loser most pundits assumed. Most, including many Labour MPs themselves, thought that contesting an election with such a programme would be suicidal. In the event, it was one of a number of factors that enabled the Labour Party to increase the number of its MPs by 30 and its share of the popular vote to 40 percent. They didn’t win of course but they were originally supposed to have been annihilated.

The election was still one to decide which group of politicians should run the political side of UK plc, but this time it wasn’t, as in recent previous elections, just a contest between two groups both pleading that their team would be the better managers of capitalism as it is. This time it was between one group still offering this (the Tories)  and another saying that they would make some changes to capitalism (Labour).

That an increased number of people voted against things as they are is at least better than voting, unenthusiastically or cynically, as if having to choose between two brands of more or less identical soap powders. If people weren’t dissatisfied with the status quo and didn’t hope for something better then the prospects for socialism would be hopeless.

There is a difference between being able to win votes on a comparatively left-wing programme for reforming capitalism and being able to implement it. If the Labour Party under Corbyn had done even better and actually won the election, past experience of left-wing governments has shown that it would fail to make capitalism work ‘for the many not the few’.

This is not because its ministers would prove to be incompetent or sell-outs but because capitalism is a social system based, precisely, on the exclusion of the many   from the ownership and control of the means of wealth production. These belong to the few, who employ the many to operate them. Under capitalism as an economic system wealth is produced for sale on a market with a view to profit, the source of this being the unpaid labour of the many appropriated by the few.

Promising to make the economic system work for the many not the few assumes the continuing existence of ‘the few’. So, the Labour Party was saying in effect that under a Corbyn Labour government the few would remain in their privileged place but some of their money would be taken from them and used to benefit the many. The trouble here is that the source of the income of the few is profits, and the pursuit of profits is what drives the capitalist economic system. Threaten profits and the economic system stalls. A left-wing government which taxed profits merely to improve the lives of the many would come up against the basic economic law of capitalism of ‘no profit, no production.’

The historically-confirmed scenario for a left-wing government is: it is elected and begins to implement its programme; an economic crisis breaks out; the government reacts by backtracking on its reforms and accepting, reluctantly or not, that profits have to come first, and implements this. They lose popularity and at the next election are either voted out or re-elected on a quite different programme (not of radical reforms but merely that they won’t be as bad as the other lot).

This is why we could not be enthusiastic about Corbyn. However well-meaning he might be in some ways (and, despite the smear campaign against him, he did come across as more well-meaning than most politicians), his programme was undeliverable. Capitalism simply cannot be made to work otherwise  than as a system where profits have to come before people. That’s the way it works and the way it has to work.

This means that politics and general elections are in fact based on an illusion – that who controls the government can control the way the economy works, whereas in fact it is the other way round; governments have to accommodate their policies to the way capitalism works. So, in the end, it doesn’t matter which group of politicians is elected to form the government. Whoever they are, whatever they have promised, they will have to govern on capitalism’s terms.

Put another way, if people vote to improve their lot under capitalism this will be frustrated by the operation of the economic forces of capitalism. Capitalism is not a system that can accommodate the democratic will of the people, as expressed in an election, to improve their conditions. The voters might propose, but capitalism disposes. This is the basis of the saying that changing governments changes nothing.

The aspiration to improve things is all to the good but it can’t be realised within the framework of capitalism. What is required to realise the hope of those who voted for  Corbyn is not to tax the few for the benefit of the many. It is to abolish the division of society into the many and the few by converting the means of wealth production from ownership by and for the few into the common property of all for the benefit of all. That would provide the framework within which to re-orient production from profit- making to directly satisfying people’s needs. Not the reformist ‘People before profits’, but the revolutionary ‘People not profits’.