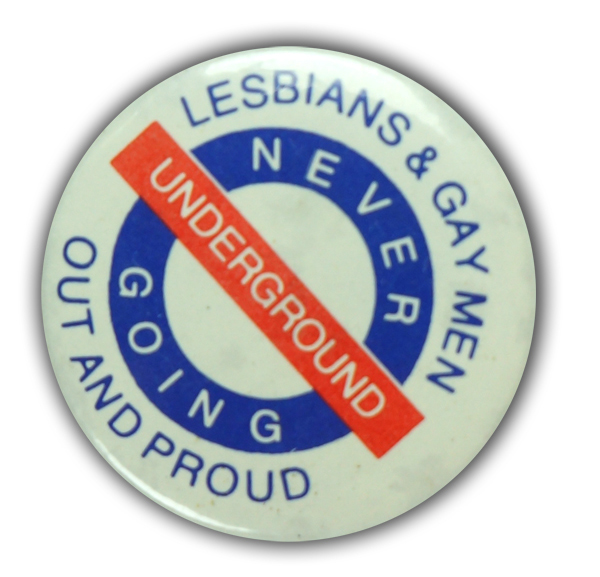 The Sexual Offences Act became law in 1967, the consequence being that sex between consenting adult males in private was no longer a criminal offence. An exhibition ‘Never Going Underground’ on LGBT+ equality at the People’s History Museum in Manchester marks the fiftieth anniversary of the Act (it’s on till 3 September). The title is a reference to the use of a logo based on that of the London Underground.

Many gay men had had their lives more or less ruined. For instance, in 1958 Conservative MP Ian Harvey was found guilty of ‘committing an act of gross indecency with another male person’. He was fined £5 but, as his counsel noted, he would in fact be paying for the rest of his life. Not that the 1967 Act would have made much difference to Harvey, as his offence took place in a park.

The exhibition covers a number of themes, such as the importance of activism and demonstrations in getting the law changed. The Sexual Offences Act was of course not in itself the end of the campaigning. The age of consent for gay sex was 21 and was only reduced to 16 (the same as for heterosexuals) in 2003 in England and Wales. In 1988 an amendment to the Local Government Act, the notorious Clause 28, barred local councils from ‘promoting’ homosexuality (which was given a very wide interpretation); this was repealed in Scotland in 2000 and in the rest of the UK in 2003.

It is also clear that there have been arguments within the LGBT+ community on various matters. One was whether it was acceptable to have the police, the armed forces and big business involved in Pride Parades. Another was whether legalising same-sex marriages represented a kind of liberation or acceptance of an oppressive institution. Also, many gay black men have found that racism in the gay scene has been greater than homophobia in black communities.

At least two interesting general lessons can be learned. One is that legal status is not by itself sufficient: there has never been any ban on lesbian sex in the UK, but there has been plenty of anti-lesbian prejudice and discrimination. Another is that solidarity across different causes is important: co-operation between a lesbian and gay group and some South Wales miners played an important role in the 1984–5 miners’ strike.