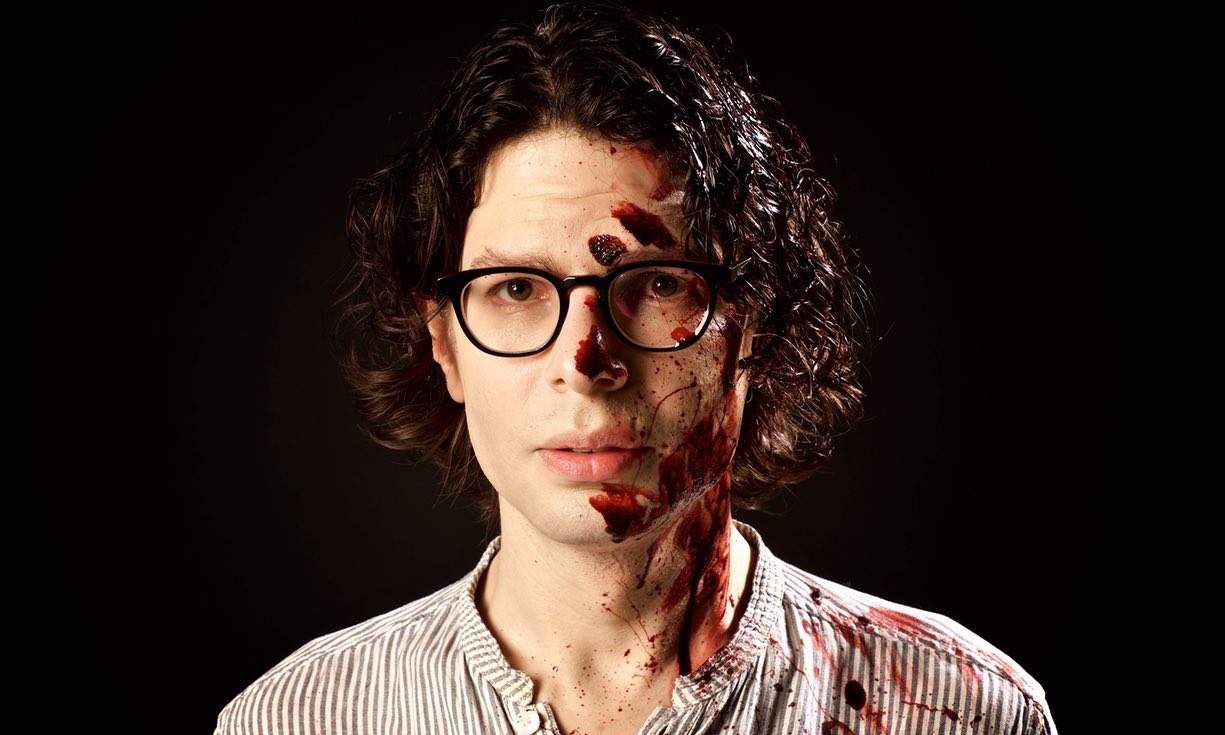 SIMON AMSTELL is carving himself an interesting career, graduating from presenting Popworld and Never Mind The Buzzcocks to writing and directing for television, alongside gigs as a stand-up comedian. His work often draws on his ruminations about his own life, and his vegan diet has drawn him to his latest work. Carnage (BBC iPlayer) almost pulls off the tricky feat of combining sci-fi, comedy and satire in the mockumentary format to raise some important questions about societal change.

The film is made in the year 2067. By this time, the populace is vegan: peaceful, polyamorous young adults can’t understand how people used to eat animal products, while some older people join support groups to deal with their guilt and shame at having been carnivores in the past.

Through clips, newsreel and talking heads, Carnage looks back on the history of animal-free diets since 1944, when The Vegan Society was formed. The movement was slow to attract support, with vegans getting little positive exposure to the wider public. 70s TV shows featuring dowdy, stilted vegans presenting an array of beige food couldn’t compete with the excitement of Fanny Craddock mutilating a pig in the Royal Albert Hall. Most people didn’t think about what they were eating because ‘the animals people were consuming stopped looking like they’d ever been animals’, thanks to the fast food industry and its gaudy marketing.

Despite increasing awareness of the risks of an animal-based diet, such as susceptibility to heart disease, obesity and cancer, and the dangers of intensive farming spreading diseases, there was still a ‘meat-driven political culture’. This was challenged in 2010 when the UN announced that veganism is essential to limiting climate change because of the carbon dioxide emissions caused by the livestock industry. Increases in flooding incidents over the next few years reinforced concerns about changing weather patterns and their causes.

After an epidemic of ‘Super Swine Flu’ in 2021, intensive farming was banned. ‘Sadly, chickens people had been eating were so genetically modified it was very difficult for them to celebrate the news’. Then followed ‘the era of confusion’ when people wanted to act more responsibly, but weren’t sure how, until inspirational role models emerged. Hip activists and chefs on the telly spread a positive message about veganism: ‘we’ve got to shock people with love. We’ve got to shock people with compassion’. Other signs that the vegan movement was growing were 2024’s hit musical about the cruelties of the dairy industry and Albania winning the Eurovision Song Contest with a power ballad about veganism. The movement was galvanised when a prominent activist was killed by a member of the Great British Meat League. This, along with the pro-meat vlogger vlogging ‘This is England! We aren’t lentils!’ makes a link between right wing politics and eating animal products. In 2032, the argument for veganism was strengthened when technology was invented which can read and translate animals’ thoughts, such as ‘I am not a cheese factory. I am a goat’. Three years later, eating animal products was banned in the 2035 Bill of Animal Rights.

Carnage throws a lot of ideas from the screen, through faked footage, archive clips and Amstell’s sarky narration. Sometimes its serious message about the supposed advantages of veganism gets clouded when a scene veers too close to Brass Eye-style satire, but the gags prevent the film from sounding preachy. The scenes from abattoirs, of cows being shot and chicks on a production line speak for themselves. But Carnage isn’t just about veganism; it also explores what makes a cause popular enough to create lasting change.

Could as significant a shift as mass conversion to veganism happen within capitalism? In Carnage, the transition sounds fairly straightforward: scientists show that eating animal products is bad for the environment and cruel, support for this view grows among the public and government, and legislation bans the meat and dairy industries, leading to utopia. In real life, it’s doubtful that the capitalist class would be so flexible, considering the economic clout of these industries. Would popular pressure and the changing climate be strong enough reasons for capitalism to be reformed in this way? Even so, mass veganism – if desirable – could only happen within capitalism if vegan-friendly industries became more profitable for their owners.

The programme starts to explore whether such a shift could only happen as part of wider change. One of the future experts looking back links the eating of animal products with the acceptance of hierarchies: ‘The Queen, despite being just another animal, was above all British people, so I suppose we thought that we should be above something’. Unfortunately, Carnage doesn’t expand on the notion that if we reject hierarchies between people we would also view animals as equal. Instead, it focuses on the how the future road to veganism gets played out in the media, and the viral videos, performance artists, social media campaigns and telegenic role models probably would be part of any growing movement.

The BBC tends to hide its more challenging output away on its iPlayer service, and Carnage is worth finding if you’re hungry for some food for thought.