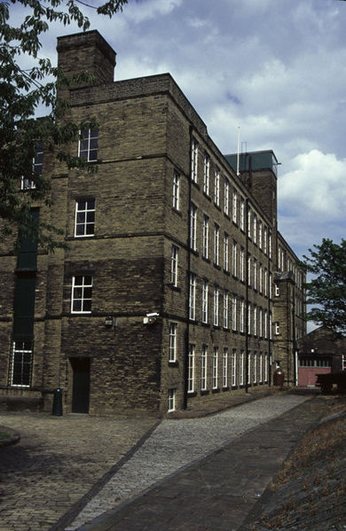 Cotton in Lancashire and wool in Yorkshire was the traditional division. What was once the world’s largest woollen mill, at Armley, is now the Leeds Industrial Museum, with the expected displays of machinery for weaving and so on, but also covering various other areas. Part of the site is still closed after the floods last Christmas.

An exhibition ‘Women, Work and War’ is currently running there, dealing with the impact that the First World War had on women’s working lives. It consists of a series of displays in various parts of the museum, rather than a single exhibition.

Many women had of course worked in wool and other textile industries before the war, but the need for men to fight, kill and be killed led to many women taking jobs in mills for the first time. They were generally less well-paid than men, but earned more than they had previously at cleaning and sewing. The need for uniforms for those in the armed services resulted in increased demand for clothing and so to an even larger workforce.

Leeds was also a centre of the printing industry, with many war propaganda posters produced there. Women came to take on a central role in this, for instance as keyboard operatives. They also worked on the railways, as porters, cleaners and guards, but not as drivers. They worked as conductors on the city’s trams, earning the same as men but required to wear long skirts rather than trousers.

From 1915, women working on the railways were allowed to join trade unions for the first time. The National Union of Railwaymen (sic) campaigned for women to receive the minimum wage for a man (presumably involving a pay rise). The number of women in the United Garment Workers’ Union also increased during the war, but the vast majority of women workers were not in a union.

Women in addition played a prominent role in the munitions industry. In 1915 the first National Shell Factory was established at Armley, but the biggest works was in the Leeds district of Barnbow, which produced over half a million tonnes of munitions. On 6 December 1915 there was an explosion at Barnbow that killed thirty-five women workers. Two further explosions there, in 1917 and 1918, killed five more workers, men and women. Guns and bombs did not kill just on the front line.