Proper Gander: Soap Gets In Your Eyes 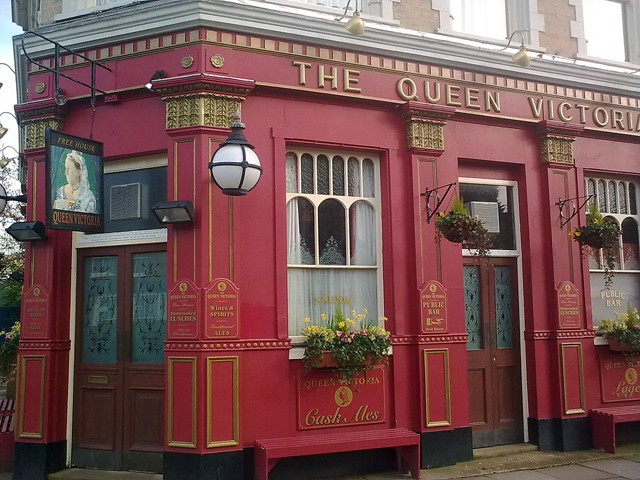 If you’re watching EastEnders and your mind starts to wander away from its latest round of tragedies, you start noticing the odd little conventions of soap operas. Why do characters in soaps never sit down to watch soap operas, for example? How do they find the time to go to the pub several times a day? Why do so few families have washing machines and instead air their dirty linen in the launderette? Why does every conversation end with one person looking pensively into the distance?

Since it began in 1985, EastEnders has clocked up over 5,300 episodes, and attracts audiences of around ten million viewers when there’s a big shock storyline. It’s more dour than rivals Coronation Street and Emmerdale usually are, and right from its inception was intended to reflect everyday issues facing Londoners.

So does EastEnders really represent ‘working class life’? We rarely see characters at work, except when they’re behind a bar or a shop counter and chatting. Having a job would get in the way of their complicated, convoluted relationships. Issues like debt, loss of employment etc are frequent sources of struggle, but the characters never talk about politics. Phil and Grant Mitchell didn’t have a discussion about which way they would vote in the EU referendum, for example. In fact, the referendum wasn’t even mentioned. Albert Square doesn’t get affected by real-world concerns like elections, wars and The Great British Bake Off.

But do we expect soap operas to be realistic, and mirror life within the sound of Bow bells? If Albert Square was a real place, no-one would want to live there, given the number of murders and disasters which happen, especially every Christmas. Thankfully, real life tends to be more humdrum, and if EastEnders really was realistic, hardly anyone would bother tuning in.

Or should we say that soaps are realistic to the extent that the characters behave authentically in an unrealistically constant succession of calamities and other life-changing events? As writer Steve Neale described, soap storylines are shaped by coincidences, chance meetings, revelations and last-minute rescues, far more than real lives are. Recently, EastEnders’ characters have faced alcohol addiction, miscarriage, homophobia, murder and redundancy, among other issues. The producers often consult with specialists about how the most emotive subjects should be approached, partly to shape our perceptions of them. A storyline about domestic abuse, for instance, would be carefully planned to raise awareness among viewers of the hurt and damage it causes and the support available. Soap operas therefore have some value and influence in highlighting social issues, even if they don’t relate them to a wider social context. This means that soap characters don’t necessarily behave in ‘realistic’ ways, but in ways which reflect what the programme-makers want to say. All drama is, by definition, contrived and even something improvised can’t reflect the ambiguity, complexity and uncertainty of real life. So it’s too much to expect soap operas to copy real life.

We gawp at soaps partly for schadenfreude – watching the characters live through each misery. When a prominent character is about to get killed off, this is often ghoulishly advertised with trailers and on TV guide magazine covers. But we wouldn’t keep tuning in if we didn’t find the characters engaging. Characters in soap operas are, to some extent, vicarious friends and families. We can snoop on their dodgy deals, affairs, lies and rows, because their lives tend to be more eventful than our own. Soaps also give us a vicarious sense of community. How many of us know as many of our neighbours as the residents of Albert Square do? Or in other words, how many of us know Dot Branning or Ian Beale better than we know some of our neighbours or colleagues?

Incidentally, if you’ve ever wondered why they’re called ‘soap operas’, it’s because these dramas originally tended to be sponsored by soap manufacturers. This term is appropriate, given that the characters and settings are set in a soapy bubble, away from everyday life.