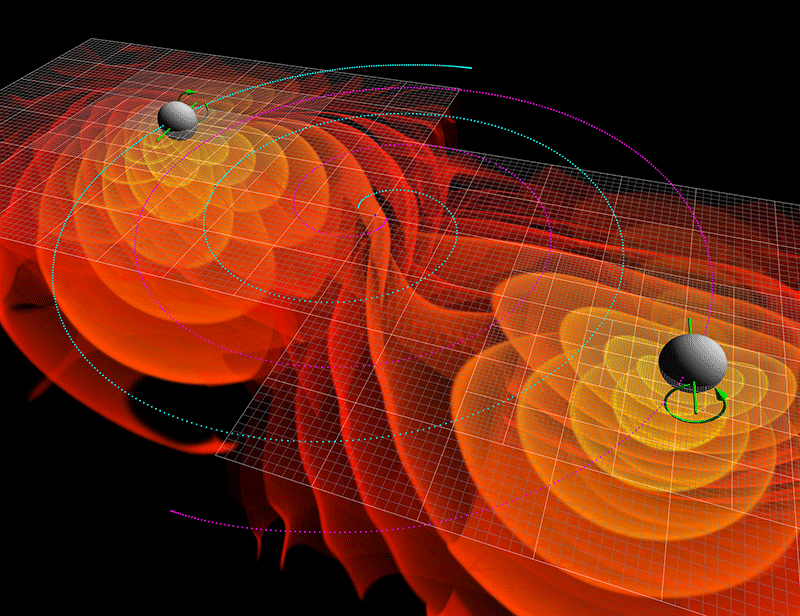 Of course the scientists were ecstatic. They had been trying to find these waves for years, and now that they had, they also potentially had a new way of looking at the universe. Maybe.

So, good job and pats on the back all round, but front-page splash material, really? It was like the Higgs all over again, with journalists and readers alike gamely talking it all up while trying not to look too baffled.

On the face of it, not much had really changed. Einstein’s theory of relativity had already been corroborated as far back as 1919, and every scrap of observational data since had only served to confirm it, making it one of the most successful theories in the history of science.

In a sense, this was the least desirable outcome, from the point of view of new physics. And new physics is sorely needed, because at the moment the Standard model doesn’t make sense. Relativity and quantum mechanics are like the unstoppable force and the immovable object, and the Standard model has them worryingly in collision. The new discovery does nothing to change that.

Still, it is pretty clever to be able to detect a movement just a thousandth of the width of a proton (though some newspapers mistakenly printed ‘atom’ instead, which is like confusing a football with a football stadium). And, to add spice, it was one of those cases of serendipitous luck that make science a lot more fun to read about.

But how interested are the public by all this? It’s not as if relativity is a subject you often hear discussed down the boozer, although maybe it depends on the boozer. And the booze (how can nothing be made of something, how can you bend time, how can you pack 30 suns into a space the size of a city, how do they even know any of this, why am I seeing two of you…?).

To many people, physics is just an advanced form of trainspotting (they might say the same about radical politics). Why should anyone care about it, when surviving in capitalism is already a full-time job? Trouble is, people feel that they ought to care because the media is making a big song and dance about it (unlike radical politics). And likewise, the media make a fuss because the scientists are making a fuss.

It comes down to a simple equation: PR x Media = Funding. Gone are the days when science was done by balding boffins in potting sheds. Instead it’s ‘Big Science’ using ‘Big Data’ collected by Big Tools with Bloody Big Budgets. Detectors like the LIGO gravity wave sensors are hooked up in a patchwork process known as interferometry, across continents and sometimes across the world or even across space. That’s not cheap. Then there are large colliders like the LHC at CERN, or the International Space Station (the most expensive tool ever built by anybody) or the ITER fusion reactor at Cadarache in France. In these cases the budgets are so big that only governments can afford them, and even then, only if they club together. And governments, as everyone knows, are peculiarly sensitive to the prevailing climate of popularity, not only among the voting populace who think they’re paying for all this but also, and more importantly, among the capitalist class who are actually footing the bill.

So science, to get its funding, has become something of a beauty contest, which is why savvy scientists now engage PR firms after, and sometimes before, getting their research peer-reviewed, and why the pressure is on to announce results even before there are any results to announce. Physics, in particular that ethereal branch known as cosmology, scores surprisingly well in this beauty contest, not because it’s in any way relevant or accessible to most of us, but because it’s full of famous and charismatic stars (no pun intended), it sports some preposterously untestable ideas, and it’s swathed in an aura of mysticism that, in the post-religion era, seems satisfyingly profound. Geneticists and chemists just don’t have that kind of glamour. Though they tend to produce far more useful science, they are the unlovely infantry grunts doing essentially icky and sticky things with test tubes. Physicists are the dashing flyboys, the Brylcreem theorists who will make the human race race faster and faster, and maybe loop the loop. It’s still based in fact, but quasi-fetishised, made to mean more than it seems, and to seem more than it means – science goes to Hollywood.

Still, and as a quid pro quo, new Hollywood sci-fi movies are increasingly expected to be ‘scientifically correct’.  Nobody ever expected Flash Gordon to flash a PhD, but the product of a more scientifically-engaged public is a more scientifically-critical audience, so now film-makers simply can’t get away with putting sound effects into space battles because everybody knows (yawn) that sound doesn’t travel in space. Instead, and in a development few would have predicted, recent films like Gravity, Interstellar or The Martian are promoted, despite the varying silliness of their plots, precisely on the grounds of their devotion to the laws of physics, and criticised precisely where that devotion falls short.

And why not indeed? If only film-makers would apply the same rigorous standards to their history films, perhaps today’s voting public would be a bit better informed about the world they live in, how it got that way, and what they should really be angry about. We’ve had politically correct, and now we’ve got scientifically correct. Maybe next cinema-goers should be demanding historically correct. And who knows? Unlike the detection of gravitational waves, that could well be a development that ends up rocking everybody’s boat.