What is the ‘Islamic State’? 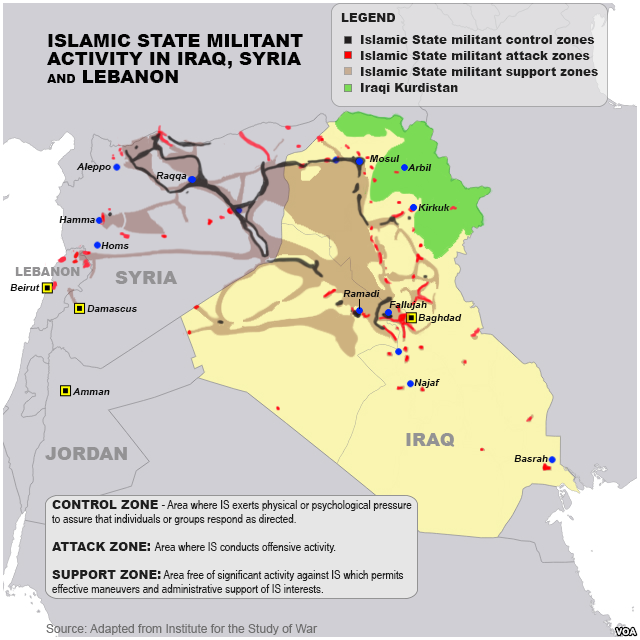 ISIS stems from the breakdown of Iraq. Its core is former officers of the Iraqi army that served under Saddam and were displaced by the Americans when they disbanded the Iraqi army after the conquest of that country. Those officers found themselves marginalised further by the capture of the state by an expressly Shia political party (under the sway of Iran). The army had been dominated by a confessional and cultural Sunni section of society. They were able to turn to their co-religionists to recruit support to mobilise against the new government. Although Islamic State (as a group) was already formed, and had emerged from Al Qaeda in Iraq and other Islamist insurgent groups, it was this lash up with experienced military commanders that allowed them to make their break through, around 2010.

It was their combat expertise, the poor moral of the new Iraqi army, and the general lack of government authority in several Sunni provinces, that allowed ISIS to capture the heavy weapons and advanced military equipment that enabled it to advance quickly and overrun Iraqi army positions to take control of vast swathes of the country in the north. The other contributory factor in its growth was the breakdown of civil order in Syria, which enabled ISIS to become a participant in that civil war.

Tellingly, in the unrest, Fallujah (already twice bloodily pacified during the US occupation) rose again. Whilst ISIS nominally maintains it controls the city, it is reported that the revolt was by local tribes, using ISIS assistance and military support. ISIS is thought to have about 30,000 fighters, and about 8 million Iraqis under their control. That is not sufficient military force to subjugate an entire population (before the uprising, about 1 in 20 of the Syrian population were employed in the Ba’athist security forces, which partly explains the regime’s resilience, and gives an indication of the scale of resources needed to completely suppress a population). In order to hold this population, it projects an image, with global reach, claiming to want to create a universal Caliphate and convert the world to genuine (i.e. its brand of) Islam.

The organisation is concerned with having a fearsome reputation, just as every bandit, feudal baron and Mafioso has needed in the past, in order to protect itself and continue its business. It is all about respect and appearance. Hence the, frankly, incompetent terror attacks on Paris, which were more about show and spectacle than about any sensible military strategic goal. Indeed, it has been noted that when they first encountered significant resistance (the Kurds of Kobane) poor morale and training of ISIS forces saw them handsomely beaten.

Their reputation, though, allows them to carry out their commercial operations. According to Channel Four News ISIS has been able to seize over $400 million in bank robberies. A further $40 million comes from kidnap and ransom operations. Its main source of regular income, though, is the $100 million it makes through selling oil, most of it, surprisingly, to the Assad regime in Syria (http://tinyurl.com/oxp3nfv). The American historian and blogger Juan Cole:

“I would argue that Daesh (ISIS) is analogous to the pirate enclaves of the early modern period. Al-Raqqa, Palmyra, Mosul, Falluja and Ramadi function for it as desert ports, as Tortuga and Port Royal did for pirates in the Caribbean and St. Mary’s on Madagascar did for pirates in the Indian Ocean. It is easy to be misled by the organization’s language of “state.” It is a militia of some 25,000 fighters who conduct raids. They don’t actually do much governing of the places they dominate, and mainly extract resources from them. Tribal raiding states in it for the loot have been common in Middle Eastern history, as with Nadir Shah in the eighteenth century. Looting one city pays for the raid that lets you loot the next. They even make the people who want to emigrate and escape their rule pay a sort of exit ransom” (http://www.juancole. com/2015/11/modern-raiding-pirate.html).

Essentially, then, in his view ISIS is the most spectacularly successful mafia operation in history.

ISIS, far from being an existential threat to the western way of life, is in fact a species of a phenomenon seen time and again in history. Its economic basis is the availability of a natural resource which can be extracted with little labour but which commands a high price (other examples are metals and diamonds in Africa, or narcotics in South America). It complements this resource by the proximity of a disposable, largely uneducated population, whom it can recruit to do its dirty work and fighting. It extends this principle with the mass kidnap of woman, and institutionalised forced marriage and rape as a reward for its soldiers. It is, in essence, no different from the Mexican drugs cartels that terrorise the border regions of that country, and infiltrate and direct the governments there.

Essentially, unlike capitalists who live off surplus value, ISIS and its leadership live off the direct expropriation of material surplus wealth, much as a feudal aristocracy did. Hence why its medieval economics rely on medieval methods of rule. The local populations do not have to be disciplined or mobilised into its system, the way workers have to be, merely passively present to extract wealth of fighting manpower from whenever it is necessary.

The role of religion in this context is to keep the local population compliant, and to help attract recruits. A common confession of faith creates the idea of a common identity, and legitimises the excesses of the ruling gang. It also helps to attract ideologues and recruits from abroad. Its most useful role is in attracting money and support. ISIS follows the Wahabbist trend of puritanical Islam that is prevalent in Saudi Arabia. This (and links between Iraqi and Saudi tribes) allows it to obtain funding from Saudis. That Saudi Arabia is itself locked in a regional power struggle with Iran, which in its turn uses the Shia strand of Islam to spread its influence, means here are geostrategic elements to the precise doctrine followed by ISIS.

The other use for Islam by ISIS is to set its stall out against the Great Powers of America and Europe, and their legacy in the Middle East. ISIS expressly rejects the boundaries drawn up by the colonial powers, and seeks to mobilise people in the region behind it against the Western Powers. Islam is embedded into the culture and history of the region, and in the state building manner of ‘selective invented traditions’ it is trying to forge a polity against the great gangsters of the Western militaries, who are sufficiently successful to make their grabs (which tend to be in terms of the territories and the resources in the ground, rather than their movables directly) almost invisible to the eye.

Whilst Islam as a religion is not the only mobilising factor in the Middle East, it’s clear that it has managed to take the role of being at the forefront of nationalism from the state capitalism of an earlier period as expressed in Nasserism, the Ba’athist regimes in Iraq and Syria and the PLO.