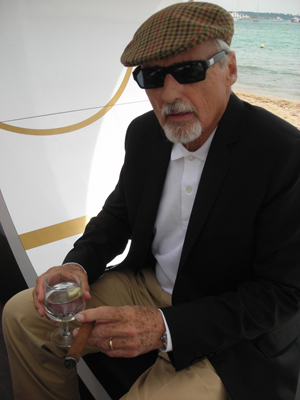 Four hundred black and white photographs taken between 1961 and 1967 by film director and actor Dennis Hopper (1936-2010) went on show last year at the Royal Academy of Arts, London. These photographs haven’t seen the light of day since his first ever photography show in Fort Worth, Texas in 1970. Hopper used a 28 mm lens Nikon camera, and later said ‘I didn’t crop my photos. They are full frame natural light.’ He turned to photography in the 1960s ‘because the reality of the things going on around me was more interesting than the fantasies of the world I worked in.’

Hopper’s photographs capture the Counter Culture and other historical, social and political events during the sixties. He carried his camera with him everywhere around his neck during this period.

The Sixties Counter Culture was inspired by Herbert Marcuse’s One-Dimensional Man, Wilhelm Reich, Norman O Brown’s Life Against Death, Aldous Huxley’s The Doors of Perception, and Alan Watts’ The Joyous Cosmology. Foucault described the era as a ‘surge of libido modulated by the class struggle.’ Hopper reminisced that ‘it was an incredible moment. There was practically a revolution going on to stop the Vietnam war’, and that ‘I’ve always been political… I was with Martin Luther King and at the Free Speech Movement in Berkeley. I was a hippie. I was probably as Left as you could get without being a Communist.’

Hopper is critically acclaimed for his direction of such films as Easy Rider, The Last Movie, and Out of the Blue, and outstanding acting in films like Tracks, The American Friend, and Blue Velvet.

He was trained in Stanislavski Method acting at the LeeStrasberg Actors School. Hopper got his directing start as second unit director on the LSD film The Trip.

His 1964 photograph The Trip is a psychedelic all-seeing eye of God with a homunculus in a Stetson. Hopper photographed the Human Be-In in San Francisco in January 1967 and photographs from this include Timothy Leary, Love-In, Hippies,Flower Children,andHippie Girl Dancing. He formed a close friendship with beat poet Michael McClure at this time. Hopper would later say ‘We’re a new kind of human being. We’re taking on more freedom and more risk. In a spiritual way, we may be the most creative generation in the last nineteen centuries.’

The defining moment of the Civil Rights movement: the 54 mile march of 4,000 people from Selma to Montgomery in Alabama led by Martin Luther King in 1965 was captured by Hopper. He later recalled that ‘Marlon Brando got me involved in the march.’

He photographed the street life of Harlem and Los Angeles. His 1961 Double Standard is a quintessentially LA image complete with convertible top and traffic. Seamstress, All Night Diner, Downtown LA, Working Man, Homeless guy & belongings in pram demonstrates Hopper’s humane view of those on the margins of society subject to poverty and hard work. Hopper said ‘I saw myself as a political artist at the time, or rather as one aiming to express social protest.’

Hopper’s photography is influenced by Aaron Siskind, Robert Capa, and Cartier-Bresson. He is in the American tradition of photographers like Dorothea Lange and Gordon Parks who were employed by the ‘New Deal’ Farm Security Administration in the 1930s and ’40s. This was a rural rehabilitation programme to improve the lives of share-croppers, tenants, poor farmers, and included a program to purchase submarginal land and resettle farmers in group farms which was an experiment in collectivising agriculture. Hopper’s photographs can be compared to Robert Frank’s record of life on the road in The Americans (1958).

In the 1980s Hopper became a Republican; ‘I read Thomas Jefferson, the idea of having less government, more individual freedom, is something that I liked’ but in 2008 he supported Barack Obama saying his reason for not voting Republican was the selection of Sarah Palin as the Vice Presidential candidate.

Hopper’s politics are essentially philosophical individualist anarchism drawing on Thomas Jefferson’s belief that people needed to be vigilant against any laws that ‘violates the rights of the individual’ and ‘that government is best which governs least.’ He is also in the tradition of Emerson’s ‘Every actual state is corrupt. Good men must not obey the laws too well … Wild liberty develops iron conscience. Want of liberty, by strengthening law and decorum, stupefies conscience’, and Thoreau’s ‘action from principle’, and ‘government is best which governs not at all’ in Civil Disobedience. Both Gandhi, and Martin Luther King cite the huge influence of Thoreau’s essay.