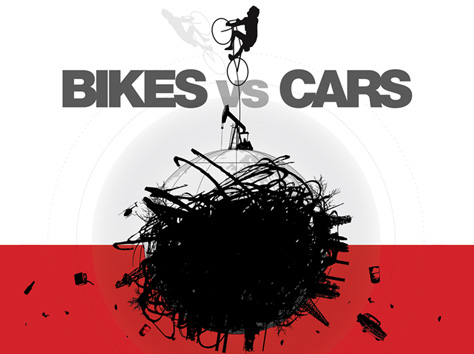 Public spaces ought to be for public use, right? And one of those public uses might be safe affordable transport for all, right? Wrong, according to the automotive lobby. For it, roads should be planned around cars (not bikes, buses or pedestrians) because people drive cars through free choice; increased car dependency represents progress or is at least ‘natural’; and cars provide jobs. Never mind, say its opponents, that cars pollute through both noise and air, are inefficient, expensive and driven by dangerous road hogs.

The widely rumoured claims that US public transport has been historically actively sabotaged by the car industry aren’t proven, just blithely repeated in the film. The film  belies its title, too, as it shows that different modes of transport historically co-existed happily and that more car lanes aren’t always the answer to the problem of more car traffic.

Counterposing Bikes vs Cars is, however certainly the case made by the likes of crack-addled Toronto mayor Rob Ford, who views his removal of bike lanes as part of the war between bikes and cars.

This is a well-produced documentary film which raises questions about all the myths around urban planning and car dependency. So the lesson is not so much ‘socialism can only arrive by bicycle’ as was once stated, but how capitalism tends to prioritise the more lucrative forms of transportation in so-called public spaces.