Many members of the World Socialist Movement will be saddened by the passing of Dick Donnelly. For 58 years he was a speaker, organiser and writer for the Socialist Party of Great Britain and was contributing to the Socialist Standard to the very end, including last month’s ‘Voice from the Back’ column.

He was only a teenager when he was introduced to socialism by the family lodger who was, luckily for us, a Party member, and when Dick finished National Service in 1957 he joined the Party. This was at a time when the Party and Glasgow Branch were at a low ebb. After WW2 public interest in politics had never been greater but during the post-war reconstruction the public’s interest in politics eventually turned into apathy.

However, Dick’s determination not only revived the Party in Glasgow but he helped get it involved in more activity than ever before. Three parliamentary and numerous city council elections were contested, huge amounts of Party literature were sold door to door, far more outdoor and indoor meetings were held and Dick was the driving force behind it all. 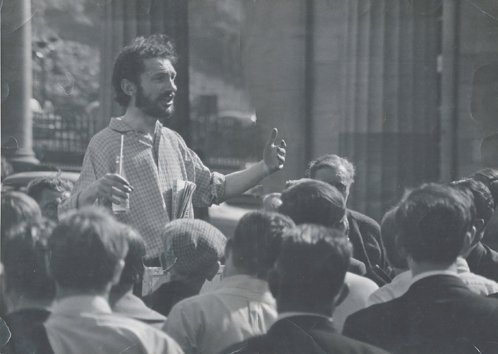 He soon became a first-class speaker, especially outdoors where he was in his element. Even people who may not have been much interested in politics came to hear him because they liked his quick wit and caustic humour. Dick was as much an entertainer as a propagandist and his wit gave him the ability to drub hecklers, especially political opponents. An example of this was at an outdoor meeting in Glasgow when a large number of aggressive Communists were in the audience. Dick ridiculed and exposed their Party and its hypocrisy to such an extent that by the end of the meeting the aggression had turned into sullen silence.

During the 1960s and 70s Dick’s speaking made him so well known in Glasgow that people recognised him in streets and pubs. It was the same in Edinburgh where he had often spoken at meetings at The Mound. This was a large open space in the very heart of the city and was Edinburgh’s equivalent of Speakers’ Corner at Hyde Park in London. Dick addressed big crowds at The Mound, especially during the Edinburgh Festival when many overseas visitors could hear the case for socialism and it always got a sympathetic hearing. He made a big enough impression to be interviewed at The Mound for BBC TV and when it was screened Dick performed like a seasoned professional.

Dick spoke at meetings the length and breadth of Britain. Nowhere was too far and he even travelled from Glasgow to the deepest south west of England to represent the Party in a debate with a local MP. Dick’s entire political life was devoted to the Socialist Party and he talked about socialism wherever he could, even in his British Rail workplace where he made many friends and even a few Party members. He always kept in close touch with them and they were affectionately  known as ‘The Railway Children’; a large number of them were present at the funeral.

Over the years Dick also visited comrades in New Zealand, Australia, America and attended the founding in Calcutta of our Companion Party in India. He just couldn’t stop doing what he could for the World Socialist Movement.

The SPGB has never had any use for leaders, but what it has always had are members who made outstanding contributions to the Party and Dick Donnelly was certainly among them. His passing has left a huge gap in our ranks and he will be a hard act to follow. We extend our deepest condolences to his daughters Paula and Laura.