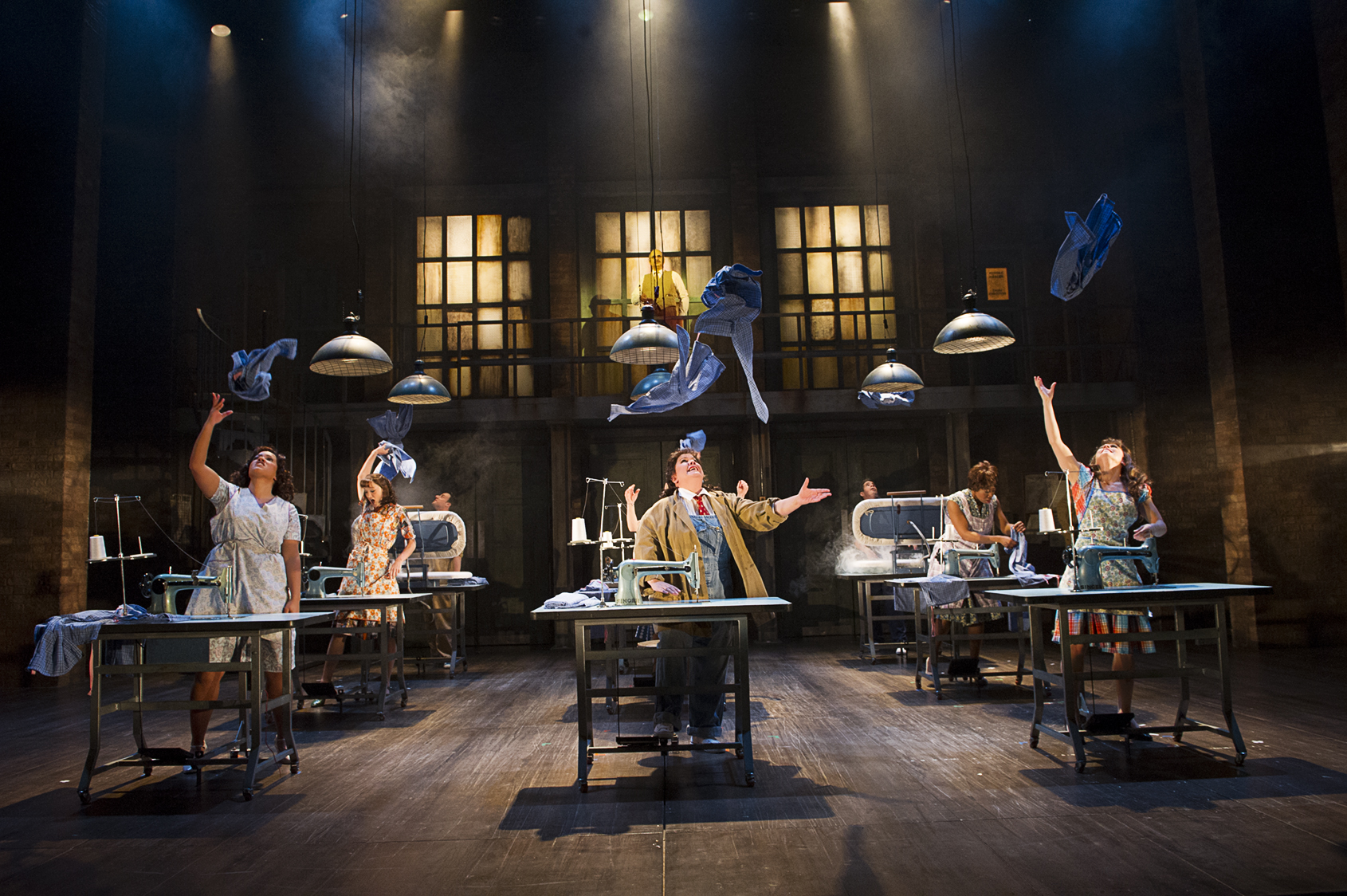 The Pajama Game, a Broadway musical comedy was produced last year at the Shaftesbury Theatre in London’s West End directed by Richard Eyre. The musical originally opened in 1954 and is based on the 1953 novel 7½ Cents by Richard Bissell, who had worked as a manager in the family’s pajama factory in Dubuque, Ohio.

The musical is set at the Sleep-Tite Pajama Factory in 1950s Mid-West America where the majority of the workers are women. In this period 35 percent of the American workforce belonged to a Union, and 29 percent of the workforce were women while in 1952 unemployment stood at only 3 percent (U.S. Department of Labor, Bureau of Labor Statistics).

It is a story of Capital and Labor where the workers in the pajama factory demand a 7½ cents an hour pay-rise. Bissell described the shop floor: ‘the sewing machines are working out themes by Stravinsky: it’s warm and lively: the blonde table tops gleam; the needles are punching their way to glory, 4,500 stitches a minute. Telephones are ringing, the elevator gate is banging.’ (7½ Cents) In The Pajama Game the new factory Superintendent Sid Sorokin falls in love with his adversary, Union representative ‘Babe’ Williams (Joanna Riding). Babe is a proto-feminist heroine declaring ‘If I needed a man to look after me, I’d kill myself.’

Capital is represented by such numbers as Racing with the Clock where we see factory work and the insistence on ‘Time is Money’, and Think of the Time I Save by Hines, the Time and Motion manager. The 1950s saw Time and Motion studies introduced to industry based on a business efficiency technique combining the Time Study work of Frederick Winslow Taylor with the Motion Study work of Frank and Lillian Gilbreth. Taylor and his colleagues placed emphasis on the content of a fair day’s work, and sought to maximize productivity irrespective of the physiological cost to the worker. The capitalist boss Hasler speaks of ‘profit levels are perniciously low’, and refuses the workers’ demands saying ‘7½ cents will price us out of the market.’

The pajama workers are organised in the Amalgamated Shirt and Pajama Workers of America, and the antagonism between the workers and the bosses is evident in Babe’s words to Sid: ‘your the Superintendent and I’m the Grievance Committee’, and ‘Don’t listen to this man. He’s management.’ The Union say that ‘7½ cents an hour pay-rise is standard in the industry’ and that ‘business is doing well’ so the workers engage in a slow down, and ‘new ways of jamming things up’, it is 7½ cents or a strike. Then it is discovered that 7½ cents had been added to the operating costs six months previously, and Hasler had pocketed the difference.

The pajama workers win their 7½ cents per hour increase in wages and the climax of the musical is the number Seven and a half Cents: ‘Seven and a half cents doesn’t buy a hell of a lot, Seven and a half cents doesn’t mean a thing! But give it to me every hour, forty hours every week, and that’s enough for me to be living like a king! That’s enough for me to get an automatic washing machine, a year’s supply of gasoline, carpeting for the living room, a vacuum instead of a blasted broom, not to mention a forty inch television set! I’ll have myself a buying spree.’

In the 1950s the working class are bought off in capitalism with consumerism. John Bugas, Ford Motor Company boss coined the term ‘consumerism’ as a substitute for ‘capitalism’ to better describe the American economy in a 1955 speech: ‘The term ‘consumerism’ would pin the tag where it actually belongs – on Mr. Consumer, the real boss and beneficiary of the American system. It would pull the rug right out from under our unfriendly critics who have blasted away so long and loud at capitalism. Somehow, I just can’t picture them shouting: ‘Down with the consumers!’

Consumerism in capitalism was critiqued early on when economist Victor Lebow wrote in 1955 ‘Our enormously productive economy demands that we make consumption our way of life, that we convert the buying and use of goods into rituals, that we seek our spiritual satisfaction and our ego satisfaction in consumption. We need things consumed, burned up, worn out, replaced and discarded at an ever-increasing rate’ (Journal of Retailing), and in Vance Packard’s 1960 book The Waste Makers, ‘consumerism’ is changed from a positive word about consumer practices to a negative word meaning excessive materialism and waste.

For socialists, modern capitalism manufactures false desires with advertising, the glorification of accumulated capital, and the abstraction and reification of experiences of authentic life into commodities and passivity which become the concrete manufacture of alienation.