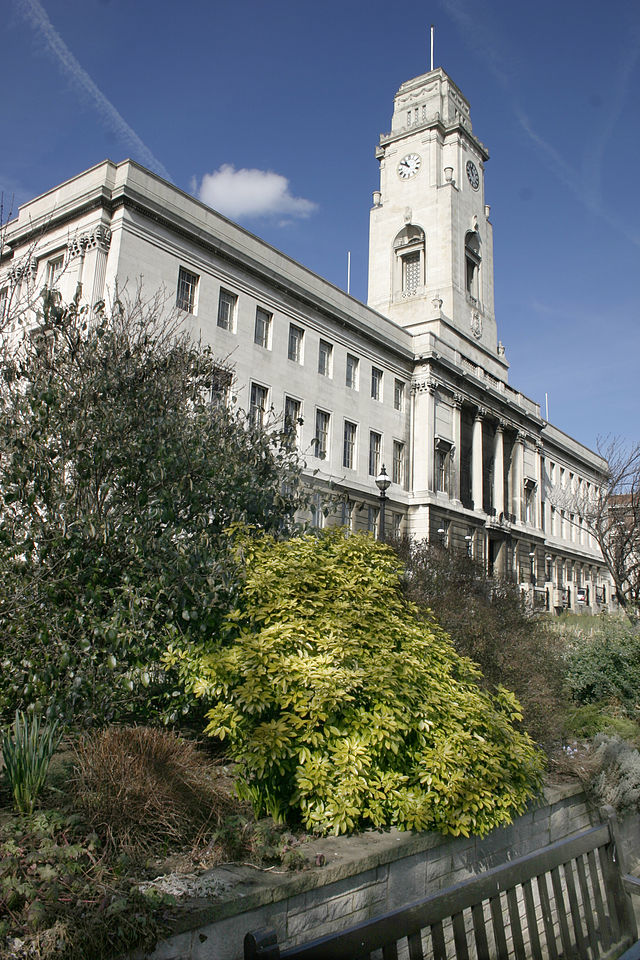 Barnsley’s history has been dominated by the glass industry and coal mining but marked by disasters that befell the working class such as the 1838 Huskar pit disaster when 26 children were killed, and in 1866 the worst pit disaster in England at Barnsley Oaks when 361 miners were killed.

The Barnsley Museum at Barnsley Town Hall is well worth a visit and showcases Barnsley’s coal mining history, with many artefacts from the class struggle that was the 1984-85 Miners’ Strike such as an Orgreave police riot shield. The museum also houses the NUM Yorkshire Area North Gawber Branch banner ‘from darkness into light’ i.e. ‘socialism’ via various reforms such as nationalisation and ’employment for all’.

British cinema is represented by the 1969 Ken Loach film Kes filmed in Barnsley, based on the novel A Kestrel for a Knave by Barnsley writer Barry Hines. This working class film publicised as ‘They beat him. They deprived him. They ridiculed him. They broke his heart. But they couldn’t break his spirit’ starred Dai Bradley, a non-professional from Barnsley. The 1996 film Brassed Off filmed in Grimethorpe near Barnsley was set during the pit closures programme of the John Major Tory government in 1992 when 31 out of 50 remaining deep mines faced closure with the loss of 31,000 jobs. In 1980-81 Grimethorpe Colliery had produced 1.2 million tonnes of coal. Barnsley is famous for Charlie Williams, the son of a Barbadian and a Barnsley girl, who was a miner and footballer at Upton colliery then joined Doncaster Rovers in 1948, and was later the first black comedian on British TV in the 1970s.

It’s just like watching Brazil is an exhibition about Barnsley Football Club, founded in 1887, nicknamed the ‘tykes’ with a motto of ‘spectemur agendo!’ (‘let us be seen together in action!’) from Ovid’s Metamorphoses, and an emblem of a glass-blower and miner. Barnsley were FA Cup winners in 1912 but the exhibition title is from the ‘cherished 1996-97 season’ when Barnsley were promoted to the Premiership. In March 2014 Barnsley football supporters would unfurl an Orgreave Truth and Justice Campaign banner ’30 Years of Lies, No Justice, No Peace, Never Forget, Never Forgive’ at the Oakwell ground. Tommy Taylor, according to John Roberts in The Team That Wouldn’t Die: The Story of the Busby Babes learned his skills in Barnsley on ‘the bog, a rock-hard piece of ground where local boys played in clogs, pit boots or bare feet.’ Taylor worked in the pit, then aged 15 signed to Barnsley as a ground-staff boy, and in 1948 his weekly wage was £2, 8s, 1d. He was signed for a transfer fee of £29,999 to Matt Busby’s Manchester United but was later killed in the 1958 Munich Air Crash aged 26.

Gilbert Daykin at the Cooper Gallery 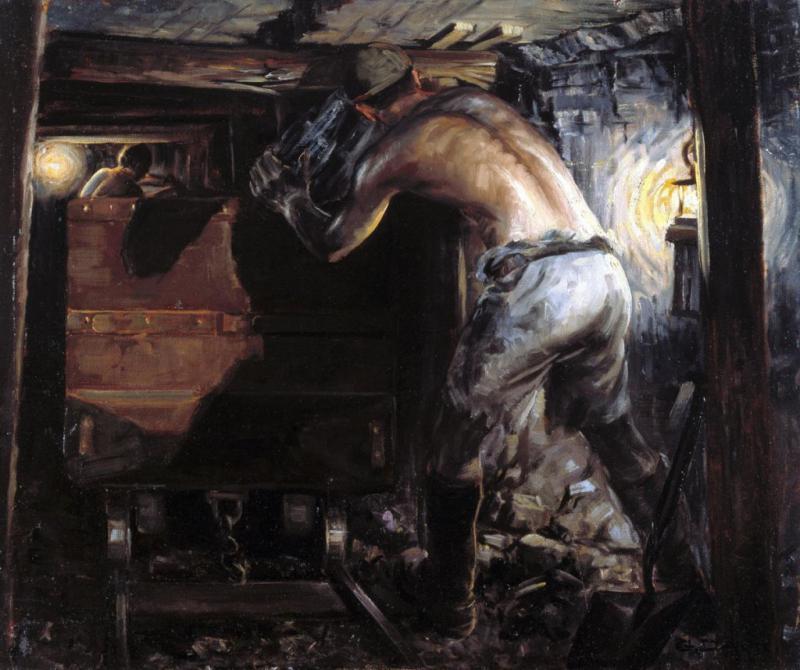 The Hidden Art of Barnsley at the Cooper Gallery in Barnsley highlighted the work of coal miner and painter Gilbert Daykin. Daykin was offered a bursary from the local Miners’ Welfare Committee to enable him to study part-time at Nottingham School of Art. His work was also brought to the attention of the then local MP Malcolm MacDonald, son of the Prime Minister. Daykin was invited to London and met the Prime Minister Ramsay MacDonald and the Duchess of Portland (she ‘cared for’ the Nottinghamshire Miners, an example of ‘the heart-burnings of the aristocrat’). Daykin would appear on the front cover of the Daily Mirror on 3 August 1931. Daykin’s 1938 oil Symbolic-Miner Enslaved is heroic and evokes Renaissance paintings of Saint Sebastian. His Choke Damp is quite macabre and underlines the dangers of working underground. Markham’s Ponies portrays coal miners pushing a truck of coal while his The Results of Labour is a somewhat idealized portrait which had been commissioned by the Staveley Coal and Iron Company. Daykin could never afford to give up mining and concentrate on his art, and tragically was killed in a pit accident at Warsop Main colliery on 20 December 1939.

Seven miles from Barnsley is the old pit village of Goldthorpe where in 1984 during the Miners’ Strike two teenage brothers Paul and Darren Holmes were killed while collecting coal when an embankment collapsed. In April 2013 an effigy of Thatcher was burned to celebrate her funeral. Since Goldthorpe colliery closed in 1994 the village has ‘died’ and the Goldthorpe and Highgate NUM Club is subtitled ‘Lest We Forget’ those from the ‘great class war’ that was the 1980s Miners’ Strike. At NUM headquarters in Barnsley there is a monument commissioned by NUM Yorkshire Area, sculpted by Graham Ibbeson in 1992, and unveiled by Arthur Scargill, President of the NUM in July 1993 which portrays a miner, his wife, young daughter and a babe in arms, and says ‘In memory of those who have lost their lives in supporting their union in times of struggle.’

Lenin was of the opinion that ‘the field of art in particular should be imbued with the spirit of the class struggle being waged by the proletariat’ which Barnsley culture could be said to demonstrate but tragically the Barnsley working class does not ‘constitute itself as a class for itself’ (Marx) as the area still elects four Labour MPs.