Mixed Media: ‘In the Jungle of the Cities’, & ‘Kill Your Darlings’

In the Jungle of the Cities by Bertolt Brecht

While Brecht’s Arturo Ui was in London’s West End, the Arcola Theatre in Dalston in East London produced Brecht’s early play Im Dickicht der Städte (In the Jungle of the Cities) directed by Peter Sturm. Im Dickicht is a bewildering and bizarre play. After its May 1923 première in Munich it became notorious for its impenetrability, was seen as incomprehensible so it was deemed to be Jewish or Bolshevik or ‘Modern’ or all three. In a Munich which was a hotbed of Nazism in the pre-Beer Hall putsch days, performances of the play were disrupted several times by the Nazis. Its first English language production would be in New York City in 1960 by Judith Malina and the Living Theatre.

Brecht’s play is set in a mythical Chicago in the years 1912-15, although the mythologised wilderness of the modern city he called Chicago could also be Berlin, what he called ‘some bleak anywhere’, a city which had ‘become wild, dark, mysterious.’ The play portrays the brutality of urban capitalism, the city in the grip of rampant capitalism and ‘the big city as a jungle… the enmity of the metropolis, its malignant stony consistency, its Babylonian confusion of languages.’ Brecht was inspired by the popular Danish gangster novel Hjulet (TheWheel) by JV Jensen, Rimbaud’s poem cycle A Season in Hell, Schiller’s play The Robbers, and the Upton Sinclair novel The Jungle which ‘set forth the breaking of human hearts by a system which exploits the labor of men and women for profit.’

Im Dickicht is the story of a savage battle between two men; Schlink, a Malay lumber dealer played by Jeffrey Kissoon, and George Garga, a book clerk in a lending library played by Joseph Arkley. Brecht wrote that poet Rimbaud was a model for the character of George Garga ‘a German translation from the French into the American.’ This struggle is at times an abstract wrestling match which can be seen as the class struggle in metaphorical terms. The relationship between Schlink and Garga is sado-masochistic at times, has elements of homosexuality which evokes the power struggle and relationship between the poets Rimbaud and Verlaine.

Im Dickicht could be the struggle against the pressing reality of the modern city, the human isolation and atomisation of individuals in capitalism where in crowded cities people are essentially alone. Schlink says ‘If you cram a ship full to bursting with human bodies, they’ll all freeze with loneliness.’ In this early play Brecht does not demonstrate his mature Marxist aesthetic with its clear political messages.

Kill Your Darlings by Austin Bunn 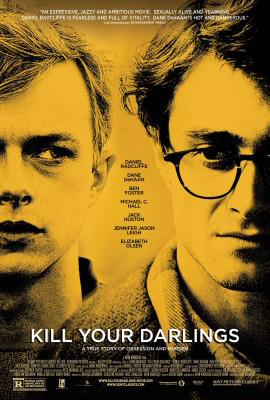 We meet Allen Ginsberg at home in New Jersey with his poet father Louis and his mother Naomi. Louis was a socialist, his parents had been active in the Yiddish Arbeiter Circle, and he went with his father to lectures by Eugene Debs, IWW founder and Socialist Party of America Presidential candidate. Louis named his first son after Debs: ‘He was magnificent. All the ironies of the capitalist system came blazing forth. He was a brilliant man.’ Allen’s mother was a member of the Communist Party.

Kerouac was a ‘Canuck’, a French-Canadian from the textile manufacturing mill-town of Lowell in Massachusetts, 13 miles north of Thoreau’s Walden Pond. Ann Charters described Lowell as ‘poor, dirty and rundown, both working-class and obstinately bourgeois, belligerently provincial.’ In the 1920s and 1930s Lowell entered economic decline when companies relocated to the South where labour was cheaper, and in 1931 Harpers Magazine called it a ‘depressed industrial desert.’

Kerouac’s first language was ‘joual’ the French of the ‘Canucks’, a dialect of working-class Quebec French, and he would overcome the handicaps of his working-class ‘Canuck’ origins to become the greatest writer since James Joyce, ‘not even 72 hours a week of underpaid mill work could keep these people in their place’ wrote Nicosia. Ginsberg overcame being a ‘spindly Jewish kid with horn-rimmed glasses’ (Vanity of Duluoz) to become the poetical heir to William Blake, a 1960s Counter-Cultural guru and New Left icon. As Dave Kammerer says in the film ‘under the right circumstances he might change the world.’