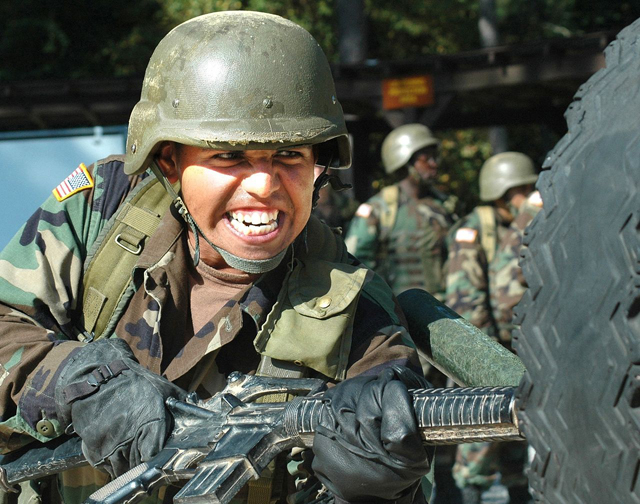 Critics sometimes say that socialist society will not work, on the grounds that people are by nature greedy or selfish or lazy or whatever. Here we examine one writer’s arguments to the effect that people are naturally aggressive.

In his book On Human Nature, the sociobiologist Edward Wilson asks, ‘Are human beings innately aggressive?’ His answer is Yes, and here is part of his reasoning:

‘Throughout history, warfare, representing only the most organized technique of aggression, has been endemic to every form of society, from hunter-gatherer bands to industrial states. During the past three centuries a majority of the countries of Europe have been engaged in war during approximately half of all the years; few have ever seen a century of continuous peace.’

Let’s look at Wilson’s arguments, and consider some facts about human behaviour. Before going any further we should look at his definition of aggression: ‘Any physical act or threat of action by one individual that reduces the freedom or genetic fitness of another’. This is odd in that it implies that only individuals, not governments, armies or companies, can commit aggression.

With regard to those who blame aggression on environmental rather than genetic factors, he writes:

So in certain circumstances humans may behave aggressively. The extent of this probability is said to be measurable, presumably by such methods as counting the number of murders and other violent acts per head of the population.

It is important to appreciate that Wilson is not arguing that aggression is an inevitable part of human behaviour, since he accepts that it will not emerge always and everywhere (and that women as a group are less aggressive than men). He is well aware that it can vary greatly over time even within a single society: he cites, for instance, the Semai of Malaya, who were entirely peaceful until recruited by the British colonial authorities in the 1950s to fight against guerrillas. They then became extremely bloodthirsty. And there have been recent claims that the extent of violent crime in England and Wales has fallen, with only about one half of the number of violent incidents that there were in 2002. No doubt the details of the statistics are questionable, as is the claim that a rise in the price of alcohol is in large part responsible. But similar trends have been reported in other countries too, so it is likely that there is a real change here. This just emphasises the point that aggressive behaviour is influenced by other aspects of society.

Notice, moreover, that one can turn Wilson’s argument round and claim that humans are innately peaceable, by restating his claims as follows:

‘Peace has been endemic in every form of human society. There have been plenty of years when European countries have been at peace rather than fighting.’

This argument for innate peaceableness is entirely parallel to that for innate aggression, and at least as convincing.

Consider, too, your own behaviour. Some people have a shorter fuse than others, and we all get angry from time to time, but how often do you react to perceived mistreatment with physical aggression or even the threat of such action? Human society would surely be impossible, or at best very unpleasant, if people really used physical force even a large part of the time. That simply is not how people behave.

‘Most significantly of all, the human forms of aggressive behavior are species-specific: although basically primate in form, they contain features that distinguish them from aggression in all other species.’

There is no general aggressive instinct applying to all animals, and humans are far less aggressive and violent than hyenas or lions, for instance. Wilson seems to be claiming that humans show only some of the possible aggressive responses found in the animal kingdom, hence there is something specifically human about people’s aggressive behaviour, therefore it must be genetically inherited. But what is supposed to follow from this?

In fact he sees human aggression as ‘a structured, predictable pattern of interaction between genes and environment’. He does not appear to believe that anyone can predict whether individuals or groups will behave aggressively in any particular situation, so all that is left is the claim that genes and environment interact to affect how we behave. Which is neither surprising nor worrying.

Wilson examines some hunter-gatherer societies, and then summarises his position:

‘Human beings are strongly predisposed to respond with unreasoning hatred to external threats and to escalate their hostility sufficiently to overwhelm the source of the threat by a respectably wide margin of safety.’

The question of how violent hunter-gatherer and other tribal societies really are remains controversial (see Edward Helmore in the Observer, 3 February 2013) but his examples show no more than that people sometimes act aggressively and that various cultural and environmental factors determine whether they in fact do so (such as the reliability of food supplies).

In addition, we should examine to what extent Wilson’s claims discredit the idea of socialism. If people really were ‘predisposed’ to react violently to each other, especially to strangers, then he might have a case against an egalitarian stateless society. But in socialism there will be no ‘external threats’ of the kind he envisages, so nothing follows about the impossibility of such a way of organising society.

Nothing Wilson says argues against the following claim:

The Socialist Party’s pamphlet Are We Prisoners of Our Genes? discusses a number of other arguments about the way human behaviour is supposedly controlled by our genetic inheritance.