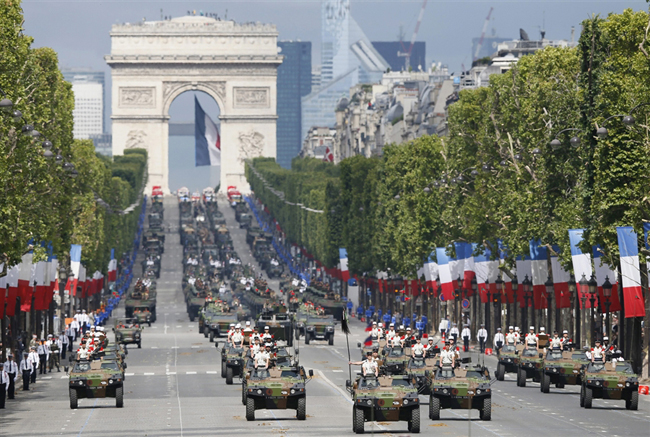 On 14 July jets led by Air Marshal Thierry Caspar-Fille-Lambie flew over the Avenue des Champs-Elysées, Paris, to commemorate the storming of the Bastille 225 years ago that triggered the advance of French capitalism. Soldiers led by Brigadier Henry Bazin, closely followed by motorised troops led by General Marcel Druart paraded past the President of the French Republic. This celebration of the bourgeois revolution tellingly illustrates the enduring bond, and historical significance, between the capitalist class and militarism. The theme for 2014 was of course: ‘The Centenary of the First World War’. Ten million dead. The President remarked ahead of the parade, ‘we owe them gratitude.’

Meanwhile, 200 miles away a tiny gathering of protesters took place outside the Science Museum in West London. Inside, in the museum’s Making of the Modern World Gallery, arms dealers from around the world congregated for what the organisers described as the ‘most important event during Farnborough week offering an unparalleled opportunity for industry networking’. Farnborough, for the public, is renowned for its Airshow, but behind the glitz and red, white and blue jet trails lies a marketplace where the world’s weapons salesmen court military delegations. The consequent marriages invariably end in multiple deaths.

The Museum’s director responded to a petition by over 2,000 signees, who view the Museum as supporting the arms trade, by stating: ‘The revenue generated by bookings such as this plays an important role in the funding mix that enables us to remain free to millions of visitors.’ Yes, of course. It’s all about money. Museums need cash, as does science, as do scientists, who can’t dine on principle pie. A large proportion of science’s funding comes from the military. It’s a symbiotic relationship under capitalism. The arms trade is as elemental to capitalism as are banks and insurers. States need weapons to defend profits, gain access to new markets, and to acquire raw materials. Typically as the big stick wielded for show, or simply as a veiled threat in negotiations with competitors. And when all else fails they need weapons—to wage war.

War is a fundamental consequence of capitalism; since 1900 there have been 247 conflicts with over 77 million fatalities (www.war-memorial.net). Yes, the killing business is always brisk. Since the First World War the character of conflicts has altered. Around 50 percent of those killed in wars in the first half of the last century were civilians. Towards the end it had risen to 90 percent. Vast profits for the manufacturers accrued from these deaths. A handful of capitalists have filled their boots, whilst the workers in the industry received a wage packet. Amongst these were capitalism’s scientists.

Radar, space exploration and communications satellites, nuclear technology, microchips, digital photography, the internet and GPS all have their origins in the killing business. Much earlier mathematics had a role to play in the development of the siege catapult. Even Galileo touted the telescope as a military aid in an effort to gain funds from the Medici court in Florence. In general, though, inventors and craftsmen worked independently from the military developing weapons and then sought their patronage once the product was ready to market. Research and development directed by the military was minimal until the dawn of a new war at the turn of the 20th century.

As much as the civilian population was recruited for the First World War so too was science. Trench warfare, with its use of strongly fortified positions, supported by heavy artillery and machine guns, caused millions of deaths but little strategic advantage. The military minds and their political masters sought new killing technologies and scientists and engineers were employed to deliver them. Tanks and aeroplanes roamed the battlefield but with limited effect. Poison gas however did have an impact—a terrifying psychological one.

Capitalism’s ideologies that had successfully mobilised millions of ordinary civilians and turned them into front line killers also worked on scientists. Why shouldn’t it? Thus scientists like Fritz Haber, described as the ‘father of chemical warfare’ and a recipient of the Nobel Prize in Chemistry in 1918, developed and organised the use of chlorine and other toxic gases employed extensively throughout the First World War. His adversary was the French Nobel laureate chemist Victor Grignard. Haber considered himself a patriot. Decorated and given the rank of captain by the Kaiser even though he was too old to enlist, Haber exposed the poison of nationalism when he penned his rationale: ‘During peace time a scientist belongs to the World, but during war time he belongs to his country’( Science: A Many-Splendored Thing, 2011).

The 20th century saw the development of new weapons. Thousands of scientists have, and still are, recruited and involved in programmes that have only one end product—killing en masse. In 1939, Frederick Banting, the co-discoverer of insulin, argued his way up and down Whitehall for the research, development and use of biological weapons. Banting was an advocate for total war as was Winston Churchill. Thus his plans found willing listeners leading to work beginning on an anthrax bomb at Porton Down under the guidance of microbiologist Paul Fildes. Banting justified total war, in his writings: ‘eight to ten people working at home are now required to keep one man in the fighting line. . . so, it is just as effective to kill or disable ten unarmed workers at home as to put a soldier out of action, and if this can be done with less risk, then it would be advantageous to employ any mode of warfare to accomplish this’ (ncbi.nlm.nih.gov).

The discovery, in Germany, of nuclear fission in 1939 was the precursor of the Manhattan project which began in 1942. By 1944 the Project employed around 129,000 waged workers, 84,500 of whom worked in construction, 40,500 were plant operators and 1,800 were military personnel. Scientists were at the apex of this workforce. The Manhattan Project culminated in the dropping of the atomic bomb on Hiroshima on 6 August 1945. About 70,000 to 80,000 people, 30 percent of the population, were killed immediately, and another 70,000 injured. The legacy of this project is what we now live under—a nuclear stockpile estimated at 20,000 warheads.

Albert Einstein’s 1905 paper on special relativity shaped the theoretical foundations for Hiroshima’s bomb. Is he to blame for all of the deaths? Or are, perhaps, the 84,500 construction workers? Are Habing and Banter to blame? Or the noxious ideologies that motivated them that creates human beings who are willing to murder other human beings simply because they salute a different coloured rag? Have the protestors at the Science Museum who caused the ‘Bahraini military delegation and a number of arms dealers to be turned away’ considered that the weapons peddlers and the military delegations are just a symptom of a corrosive disease? If one arms dealer is turned away ten others will fill the void. For every tyrant deposed five are evolving. It’s not the weapons, their peddlers, or the buyers that are the problem—it’s the system that spawns them. That system is capitalism. And all industries are governed by its priorities.

The killing business needs customers and capitalism’s impetus towards war always provides them: ‘Ukrainian President Petro Poroshenko said he will reduce the country’s ‘useless’ science programs to finance the production of drones and precision weapons. ‘There will be no more spending of billions of people’s money, taxpayers’ money on useless research programs, which were used as a tool for theft’, said a statement published on the president’s website early on Wednesday. ‘Today, Ukrainian production will be busy making precision weapons systems, Ukrainian drones, everything the Ukrainian army needs, starting with bullet proof vests and ending with thermographic cameras,’ he said’ (rt.com).

A clock is ticking. A scientist who understood how capitalism works and what it is capable of left this timely reminder for all of us: ‘I do not know with what weapons World War 3 will be fought, but World War 4 will be fought with sticks and stones’ — Albert Einstein